A man in Yaowarat wearing a protective face mask uses his phone during the coronavirus disease outbreak on Saturday. (Reuters photo)

Of the new cases, 28 were in the capital, Bangkok, said centre spokesman Taweesilp Visanuyothin.

No new fatalities were reported. Thailand has had 47 deaths from the coronavirus.

For the second day in a row, no new Covid-19 infections were reported in Phuket on Sunday, the provincial communicable disease committee announced.

On Saturday night, four professional golfers and 131 students studying in the United States arrived at Suvarnabhumi airport and have been quarantined for 14 days.

The centre singled out people aged 20-39 as the group most at risk due to behaviours that could spread the virus.

This group had the most infections — 1,334, or almost half of total confirmed infections, according to figures through Saturday. Most of them were in Bangkok, Nonthaburi and Phuket.

“This is the group that loves socialising and could carry the virus to infect other people at their homes,” Dr Taweesilp said.

Bangkok was the area of greatest concern to the centre as the capital on Sunday dominated the new infections, with 24 of the total 32.

New cases in Bangkok were on an upward trend, he said, along with those in Nonthaburi due to its close proximity to the capital.

Bangkok has 1,425 Covid-19 cases, the most of all provinces in the country. Nonthaburi is third with 150 cases, with no new case reported on Sunday.

Some people have starting going out more, and that could drive additional cases in the future, he warned. 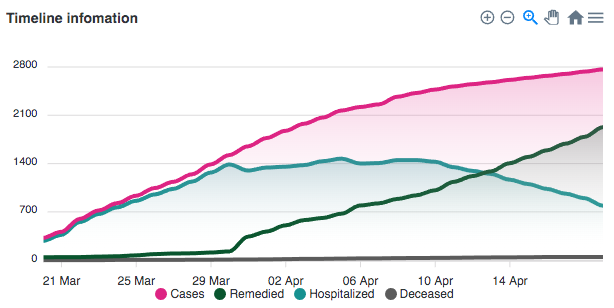