Immigration police have arrested seven people in separate raids for public fraud over the sales of face masks. One of them claimed to be a police officer who allegedly cheated a victim out of 1.46 million baht for the sale of non-existent masks.

Pol Lt Gen Sompong Chingduang, commissioner of the Immigration Bureau, on Thursday announced the arrests of the seven suspects in four cases.

In the first case, Thornnisorn and Sirakarn (surnames withheld) were apprehended on arrest warrants issued by the Bangkok South Criminal Court for colluding in fraud.

One victim filed a complaint with police at Pathumwan police station that she had contacted the Facebook user “Phukong Met’’ (Captain Met) to buy face masks and was told to transfer 1.46 million baht in total in eight transactions into Ms Sirikarn's bank account.

After the payments were made, the victim did not receive any face masks, said the Immigration Bureau chief.

Immigration police had looked into the bank account and examined close-circuit television cameras that shed light on the two suspects involved in the face mask fraud.

Ms Sirakarn, who was Mr Thornisorn’s stepmother, was caught at a house in Surat Thani, while her stepson was later arrested in tambon Makham Tia of the same southern province, said Pol Lt Gen Sompong.

During the interrogation, Mr Thornnisorn confessed to having used a photo of a police officer in Phitsanulok province as a profile photo on his “Phukong Met’’ Facebook page to dupe people into buying the masks.

He told police he had spent the money swindled from the vicitms to finance his gambling habits and personal expenses. The two suspects were handed over to Pathumwan police.

The woman had used the “Rakasong Khaituk’’ Facebook page to sell face masks at 480 baht per 50-piece box. When victims wired money into a bank account given by the suspect, they had not  been given the goods.

Police arrested her in Songkhla province and sent her to Phetkasem police in Bangkok for legal action.

The investigation found the woman had earlier committed similar fraud by selling clothing on a Facebook page. At least 300 people had fallen victim to the woman, said the Immigration Bureau chief.

The Thai man, identified only as Monchai, was caught with 403 face masks which he bought from the two Cambodian suspects for sale in Bangkok at inflated prices. The extended investigation led to the arrest of the two Cambodian nationals — Lee and Kui — at a rented room in Sa Kaeo’s Aranyaprathet district, where 2,500 face masks were seized.

In the fourth case, Mr Narongdet (surname withheld) was caught at a parking lot at an apartment in Bang Phlat district, Bangkok, for selling face masks online at inflated prices. 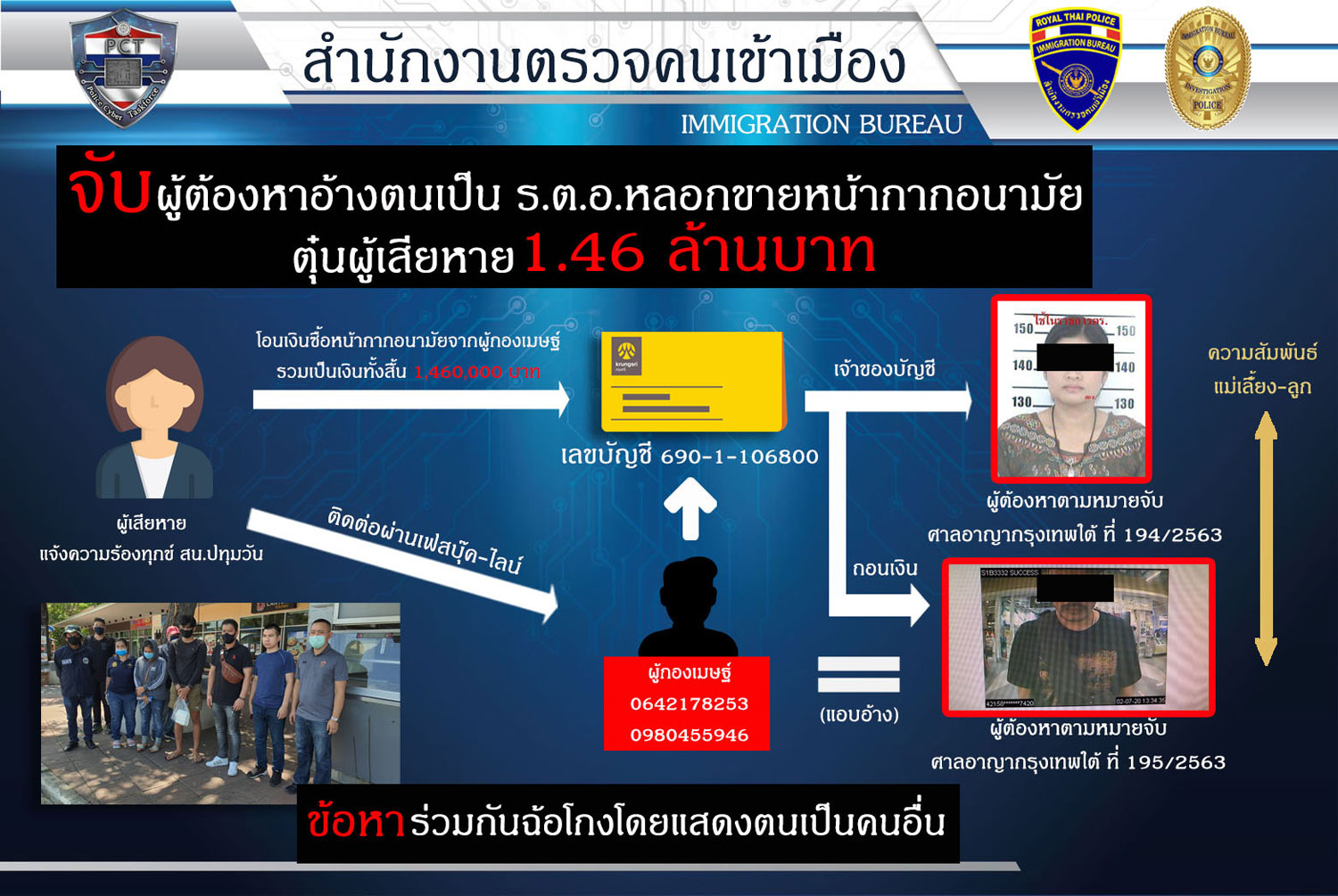 A chart shows a victim (left) being duped into wiring 1.46 million baht into a bank account given by a bogus police officer over the purchase of face masks. However, the victim did not receive any masks after the payments were made. (Supplied photo)