Ranong and Samut Sakhon provinces have managed to keep Covid-19 infections at bay and credit for their impregnable defence is owed largely to village volunteer health workers.

Known formally as Migrant Health Volunteers (MHVs), they reach out to the migrant worker groups who make up a large share of people in both provinces.

The MHVs replicates the model of the Village Health Volunteers (VHV) programme. The only difference is MHVs are made up of individuals who speak the language of migrant workers.

Pockets of Ranong and Samut Sakhon are known as "Little Myanmar", where migrant workers from the neighbouring country live together in concentrated areas, exposing the inhabitants to the threat of diseases.

Choowong Sangkong, project manager of World Vision Foundation (WVF) of Thailand, said no migrant workers anywhere in the country, except in Bangkok, are infected with the coronavirus.

In the capital, the virus has infected 16 migrant workers; 14 Myanmar nationals and one worker each from Cambodia and Laos.

Assistant Minister for Labour Duangrit Chairungrueng said the workers, despite being a marginal group, need to be educated about basic healthcare. That would enable them to take better care of themselves and those around them. Mr Duangrit recently visited a fresh market in Samut Sakhon where many migrants work.

He was accompanied by Pichit Siriwan, deputy director of the Relief and Community Health Bureau of the Thai Red Cross Society, and provincial governor Wirasak Wichitsaengsi. They handed out basic protection materials such as hand gel, face masks and pamphlets.

They also distributed instructions on how to practice personal hygiene.

Mr Wirasak advised workers not to panic and be wary of habits which could endanger their health.

Viroonsiri Arayawong, a researcher of the Department of Health Service Support, said MHVs and the VHVs form the backbone of manpower controlling the spread of diseases in migrant worker communities.

The MHVs have unrestricted access to workers with whom they are close. The workers trust the volunteers and listen to what they are told. 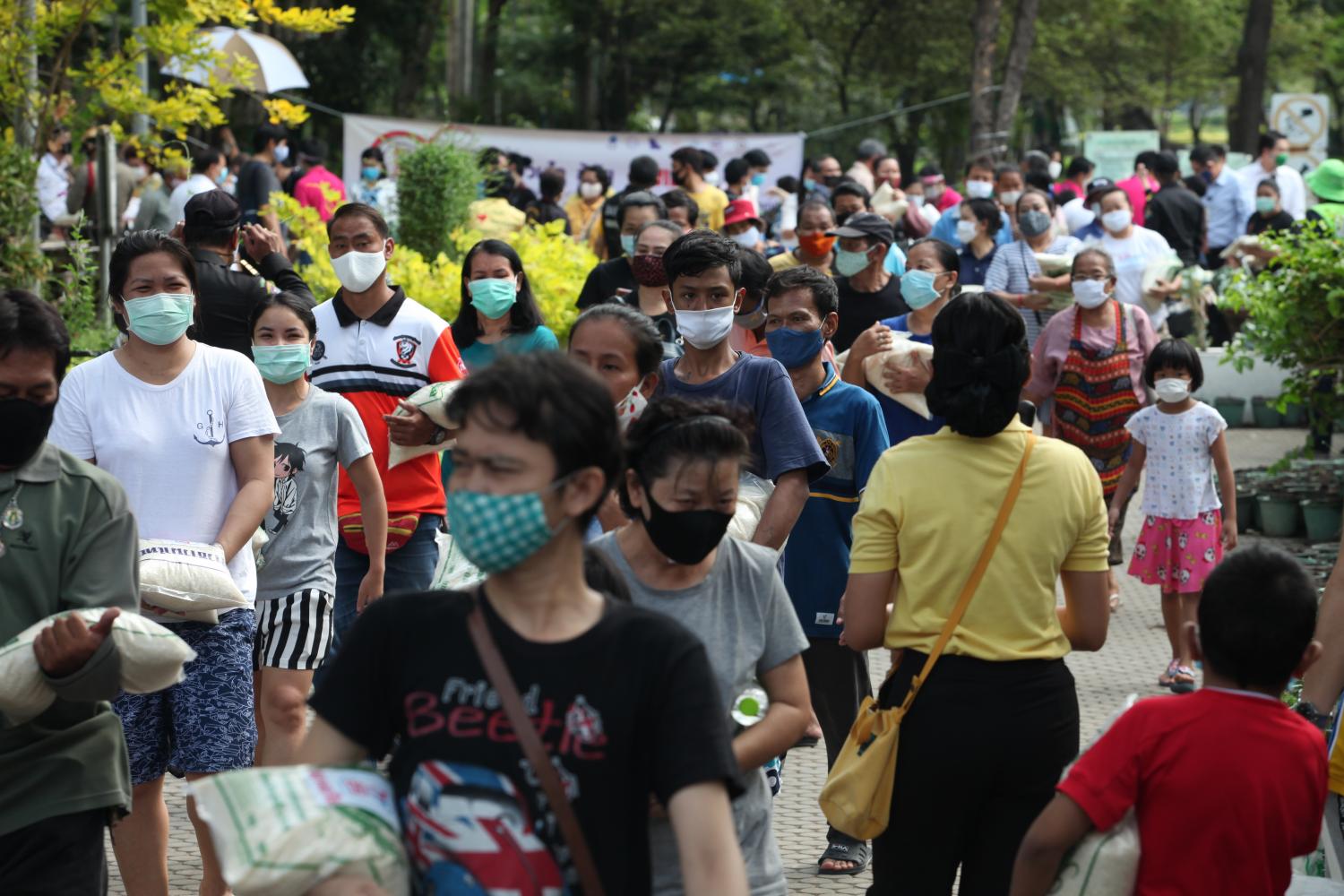 People affected by Covid-19 gather in Santiphap Park in Ratchathewi district to get rice handouts. One thousand bags, each containing five kilogrammes of rice, were distributed by Siam Gas Group.  (Photo by Apichart Jinakul)

Ms Viroonsiri said the MHVs are mostly of the same nationalities as the migrant workers and are trained in public health. They also act as interpreters for Thai officials passing on information about Covid-19 infections.

The MHV project was first initiated in 2005 to tackle the transmission of tuberculosis among Thais and migrant workers who work closely together.

It was set up to streamline migrant workers' healthcare standards with the Public Health Ministry providing details of disease prevention to workers.

The MHVs are trained by volunteers and medical staff before they are sent out to perform their duties.

Aung Ko Latt, 44, an MHV at a temple community in Samut Sakhon, circulates information about Covid-19 among fellow Myanmar workers.

His assignment is to tell the workers how they can detect the symptoms of the coronavirus and how to protect themselves.

He also hands out booklets written in languages that both the Myanmar and Mon-ethnic workers can understand.

Mr Ko Latt said big factories which employ many from Myanmar take workers' temperature before they enter. Other factories instruct workers to keep a travel record and track who they come into contact with on a daily basis.

The province has managed to remain coronavirus-free because of cooperation from everyone in the community as they adopt strict sanitation procedures and pay attention to medical advice.

"Factories and markets which the migrant workers visit have adopted strict hygiene steps such as social distancing between vendors and customers, the mandatory wearing of face masks and limiting opening hours," he said.

"The markets normally stay open until late. However, since the pandemic, they have been closing earlier to reduce congestion," he said.

Mr Ko Latt is a professional volunteer as he has been trained in various public health courses for more than 15 years.

He said he has cultivated deep knowledge about infections and what preventive measures are needed to deal with epidemics like dengue fever and avian flu. As a volunteer, he bridges the gap between the migrants and the authorities.

He estimated there are at least 500 MHVs in Samut Sakhon. They include experienced volunteers and recruits who juggle time between volunteer assignments in Samut Sakhon and work in other provinces.

She said she is the first person to know if any Myanmar workers are ill and what the illnesses were. So far, she has not had to convey any messages about Covid-19 infections to compatriots working in the province.