Former prime minister Thaksin Shinawatra was named as the host of funeral rites for a young security guard who hanged herself after posting a drawing of Prime Minister Prayut Chan-o-cha online and complaining about life's hardships under his regime.

The young woman ended her life after posting online a pencil sketch she made of Gen Prayut along with a message complaining about the hardship she faced and describing the prime minister as "heartless".

She blamed him for the tough life and troubles she and other poor people have faced during his administration.

She wrote that she drew the picture in a fit of depression when she had no money to buy milk to feed her child and as the prices of goods were skyrocketing.

She wrote, “It’s a drawing that I had no desire to continue drawing. I felt that this picture could be drawn on any paper. Since I studied, I have never seen any drawings that were low like this. I drew it in a fit of depression, having no money to buy milk for my child. Everything is sold at skyrocketing prices. I drew it in a fit of depression that I worked 12 hours a day and yet I have nothing left. I drew it with tears…..”

Her story made headlines on social and mainstream Thai media. But people also raised their eyebrows upon seeing the name of former prime minister Thaksin on the whiteboard at the temple where her funeral rites were held.

Thaksin, who was ousted from power by a military coup, was named the host of her funeral rites on May 1, Khaosod Online reported.

Kongkrit Hongwilai, a former Pheu Thai MP for Prachin Buri, wrote Thaksin's name on the whiteboard. He said he was there on behalf of Khunying Sudarat Keyuraphan, the party's chief strategist, to present a wreath and financial assistance to the family of the dead woman.

He insisted that naming Thaksin as the host had nothing to do with politics. Now was the time for all people to help one another, he said, according to Khaosod Online,

Plaifon, a native of Chachoengsao’s Bang Pakong district, was found hanged in her room at a dormitory on Soi Phetkasem 47 in Bang Khae district, Bangkok about 1.55am on April 28,  according to police.

Her husband Wichai Hemhuem told police that Plaifon talked him over the phone, and said she intended to hang herself.

He immediately left his workplace in Onnut and rushed to their room. On arrival, he found her hanging unconscious from a door frame. Her took her down and tried to revive her, but she did not respond.

Police and medics rushed to the scene in response to his call. A doctor examined her and said she had died from suffocation.

Plaifon posted her comments and drawing of Gen Prayuth on her Facebook page on April 22, one week before her suicide. As news of her death spread, the post went viral.

Thai media quoted her husband saying she suffered a chronic illness and used to hurt herself.

She had been stressed out because she had a fever and had to stop working as a security guard. She had to stay at her room with no income.

She could not even travel to Chachoengsao province to see her eight-month-old son at this time.

Her colleagues told police that she talked often about many issues. But she never talked about politics or the government’s 5,000-baht cash handout for people affected by the Covid-19 pandemic. She was a talented artist and liked drawing pictures of people, and cartoons.

Police said Plaifon had received 5,000-baht cash from the government on April 16. As for her drawing of Gen Prayut, they did not find it in the room.

Her husband confirmed she made the drawing, but did not know what became of it. 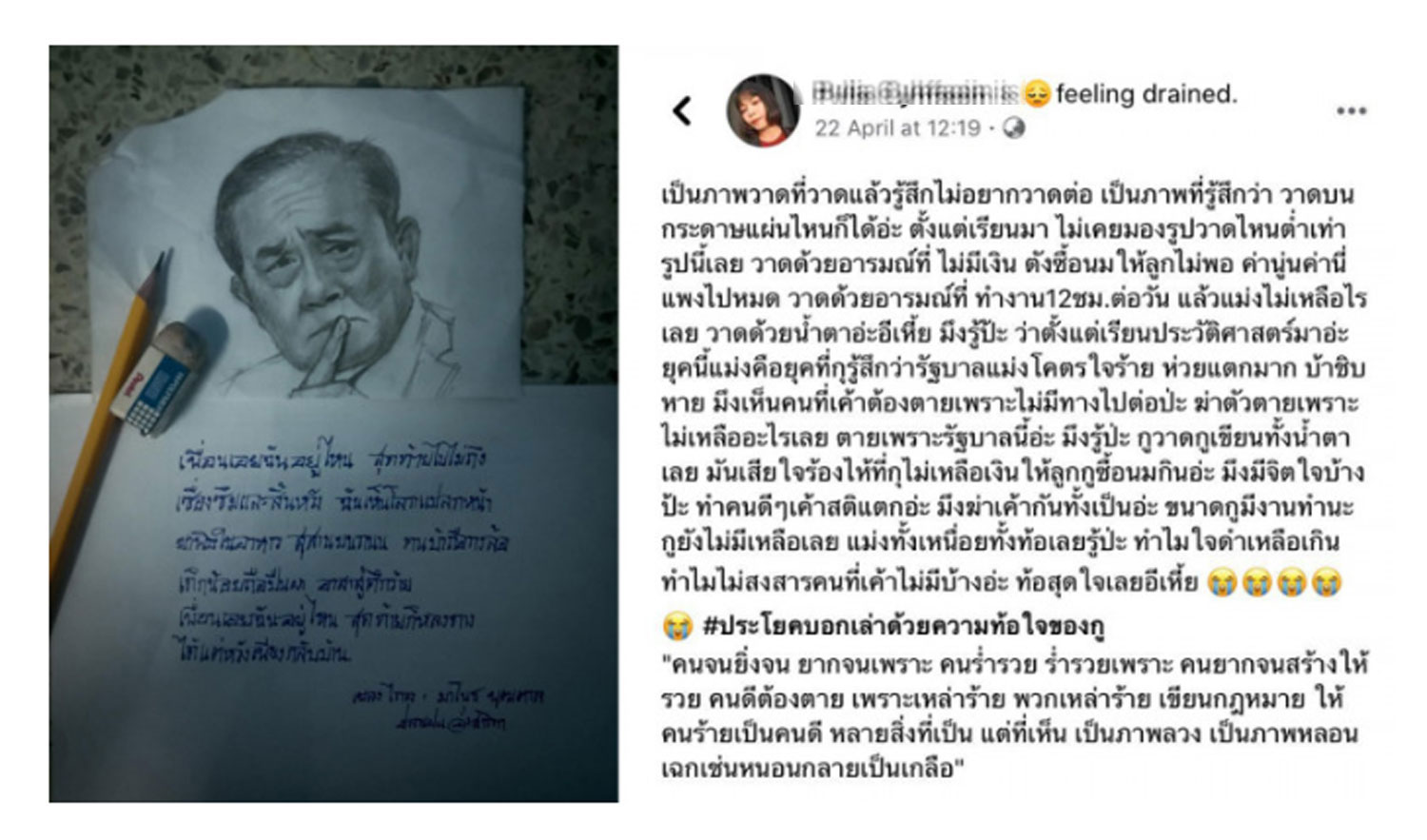 A young security guard posted this drawing of Prime Minister Prayut Chan-o-cha and message on her Facebook page a week before she ended her life. (Facebook photo)