Travellers reminded of no return

Motorists wait their turn to cross the bridge at Tha Chatchai and leave Phuket island for the southern mainland early on Friday. (Photo: Achadtaya Chuenniran)

PHUKET: People started leaving Phuket by road on Friday for the first time since the resort island was closed off a month ago, but it remains shut to outsiders.

Tha Chatchai, where the island links with the mainland and Phangnga province, was busy from 5am, when the people who had reserved the first exit slots were allowed to cross the bridge and leave Phuket, with others scheduled to leave in the afternoon.

The road from Phuket town to Tha Chatchai was jam-packed with cars from early morning, stretching back  several kilometres, with people anxious to head home as soon as possible.

But the province then made a sudden about-turn on Friday afternoon, announcing that no more people would be allowed to leave until Sunday.

He said only that the decision was made after discussions between Phuket governor Phakaphong Tavipatana and the government in Bangkok.

The province closed its border a month ago, banning both entry and exit, to constrain the spread of the  coronavirus disease -- stranding tens of thousands of workers from other provinces who were mostly out of work and unable to return home.

The ban on people leaving ended at midnight and the road reopened at 5am, an hour after the night curfew ended.

About 40,000 people had registered to leave, having applied online or informed local authorities in advance. The deadline was on Thursday.

The exit flow is being controlled. Phuket will allow only 5,000 people to leave each day, half of them in the morning and the rest in the afternoon. At that rate it will take more than a week to send them all off.

Only travellers with their own or rented vehicles were being allowed to leave, and they must have a clear destination. Renters were required to sign contracts guaranteeing they would return to the island.

Details of those returning were being forwarded to their home provinces, so their health could be properly monitored.

The deputy governor said people leaving could not come back at this time, as the island was still sealed off. (continues below) 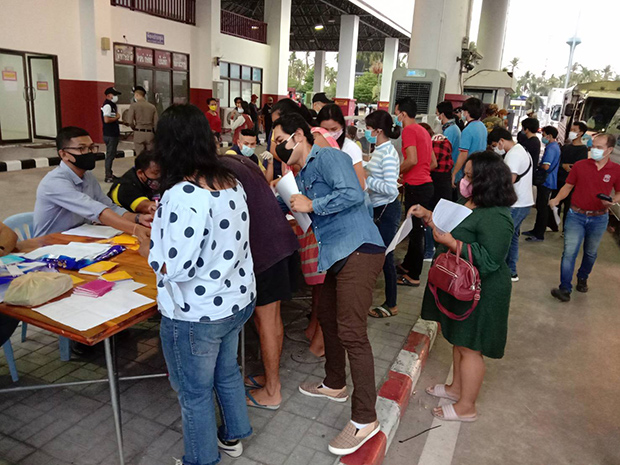 Travellers check their registation and other information before they are allowed to leave Phuket by road on Friday. (Photo: Achadtaya Chuenniran)

The Civil Aviation Authority of Thailand extended the closure of Phuket airport until May 15 shortly before the previous closure order expired on Thursday.

The extension was requested by Phuket governor Phakaphong, who heads the provincial emergency panel.

Phuket has 216 confirmed cases of Covid-19 infection, second only to Bangkok. Although no new cases were reported at Friday morning's update, and the number of new infections is dropping, the Provincial Communicable Disease Committee is worried about a resurgence.