Online registration open until May 8 for fit-to-travel documents

People queue in Phuket to obtain documents that will allow them to pass through the road checkpoint leaving the island. (Photo by Achadtaya Chuenniran)

PHUKET: People who want to leave this island province by road must register online by May 8 to obtain fit-to-travel certificates, authorities said on Saturday.

The announcement followed a chaotic Friday when hundreds of vehicles attempted to leave the province on the first day that outbound travel was allowed after a month-long lockdown. On Friday afternoon, authorities announced that no more people would be allowed to leave until Sunday.

When outbound road travel is allowed to resume, every driver must show a fit-to-travel certificate at Tha Chatchai, where the island links with the mainland and Phangnga province.

Governor Phakaphong Tavipatana said authorities were trying to help the thousands of people left stranded when the province closed its borders a month ago, banning both entry and exit, to curb the spread of the coronavirus.

Many of those stuck on the island lost their jobs as tourism collapsed and now they want to return to their home provinces.

Mr Phakaphong sought advice from the Interior Ministry in Bangkok on how to manage the exodus. Officials there said Phuket authorities must provide destination provinces with a list of returnees. The province must also issue a document to guarantee that those on the list have been screened by disease control officials or have been in self-quarantine in Phuket for 14 days before their travel.

Authorities have opened online registration via www.phuket.go.th/FIT-to-Travel for those wanting to leave the province, said Mr Phakaphong.

People are required to enter their 13-digit national ID or passport number and personal information, their destination and vehicle details. Once approved, they will receive fit-to-travel certificates. They have to show this certificate to officers at Tha Chatchai as they leave the island.

People can also register and receive the certificates at the Muang, Kathu and Thalang district offices, and the tambon Sri Soonthon and Wichit municipal offices.

About 40,000 people have registered so far to leave the island, according to Pol Maj Gen Rungroj Thakoorpunyasiri, the Phuket police chief.

As large crowds gathered at Tha Chatchai on Saturday afternoon to seek permission to leave for their home provinces, about 100 police including anti-riot officers were deployed to keep order.

Pol Maj Gen Rungroj sought cooperation from the public, reiterating that everyone must register online and print out forms to be signed by representatives of the governor and public health chief. Once they present approved forms at Tha Chatchai, they will receive a queue number for onward travel.

Authorities’ original plan was to allow a maximum of 5,000 people to leave the island each day.

Phuket remains closed to entry by outsiders, and Phuket International Airport is closed until May 15.

The province has 220 confirmed cases of Covid-19 infections, second only to Bangkok. 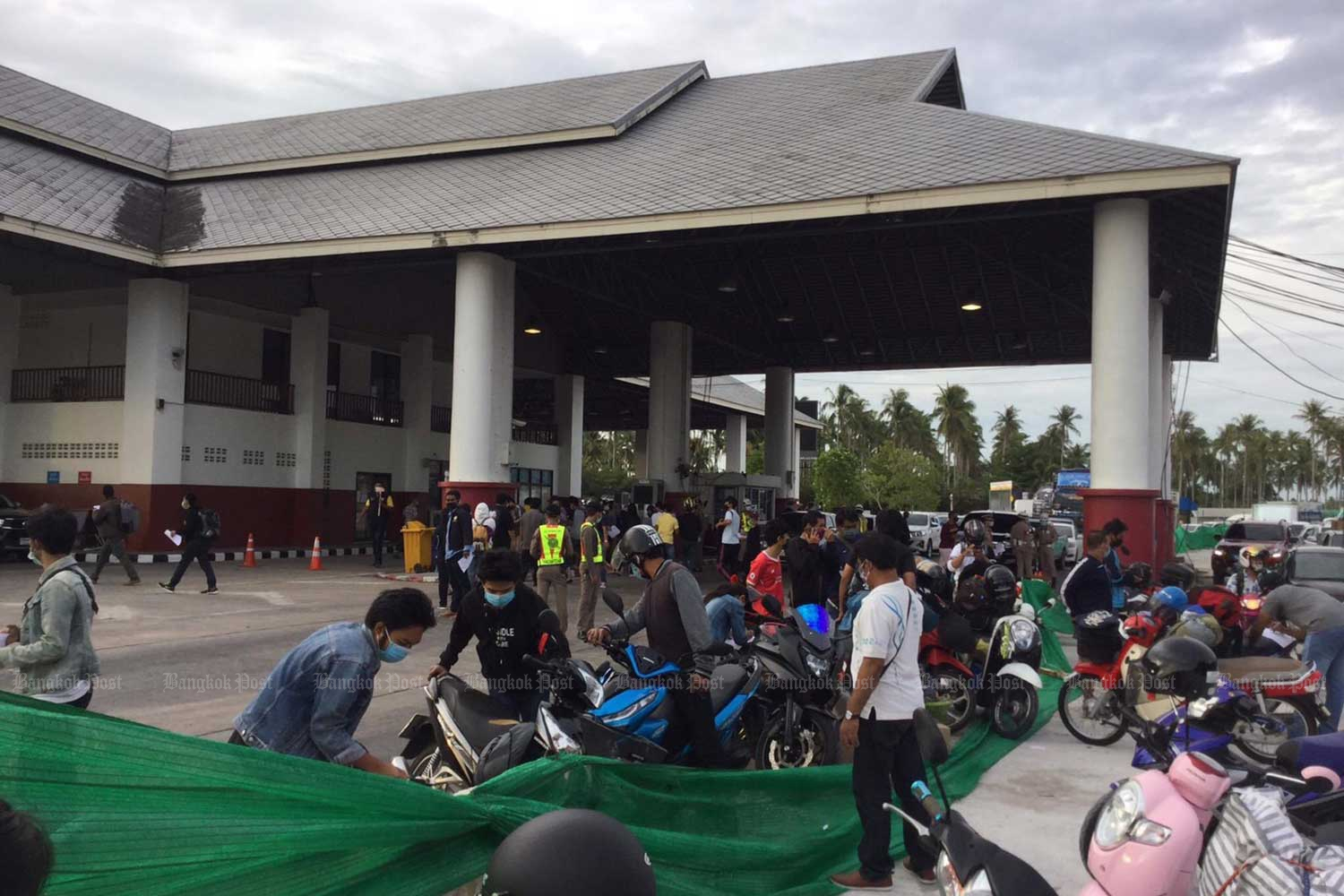 Crowds gather at Tha Chathcai to seek permission to leave Phuket. Many are seeking to leave the province by motorcycle as well as by car. (Photo by Achadtaya Chuenniran) 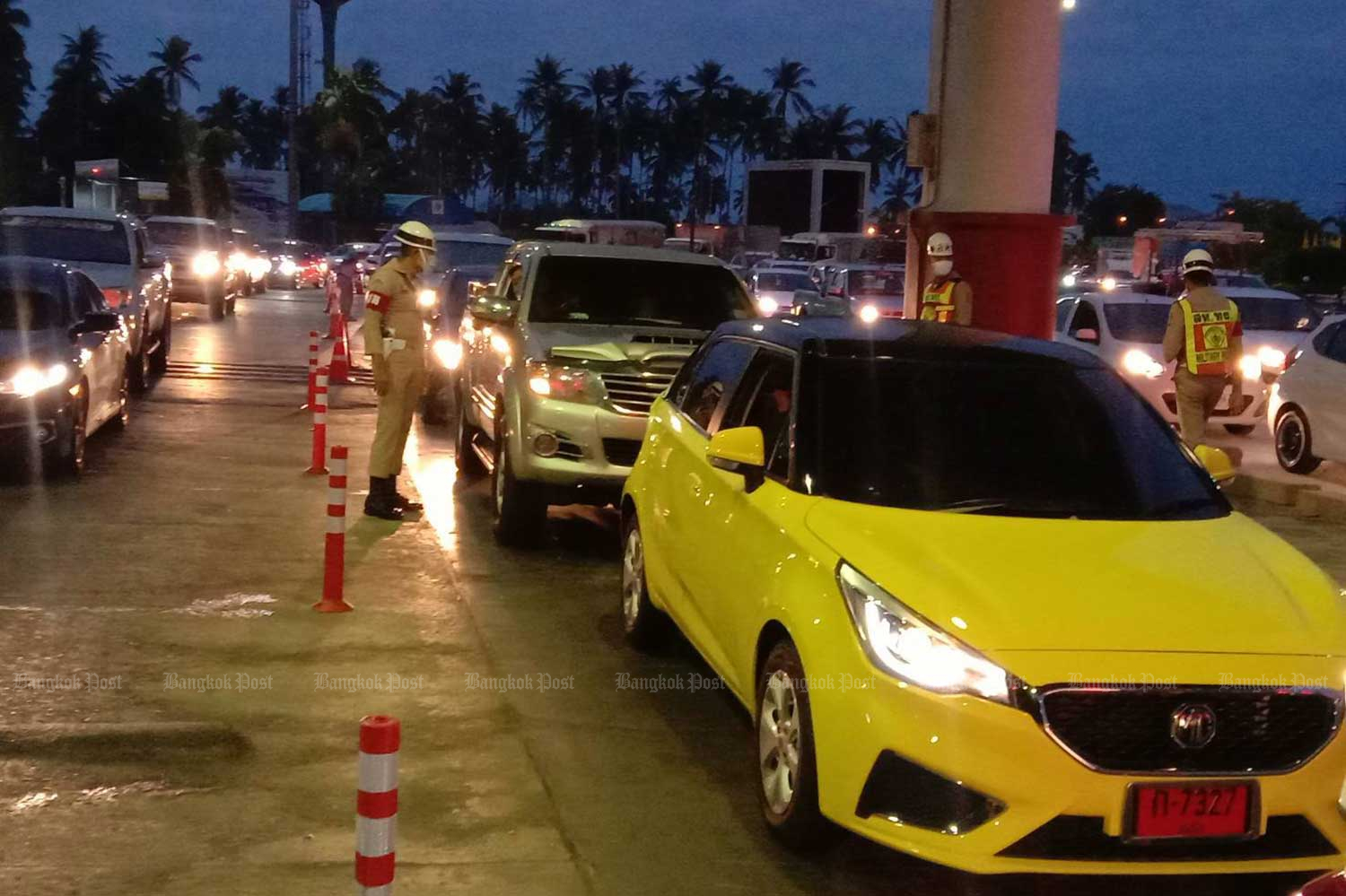