Health officials in Yala are working night and day in their battle against Covid-19 during Ramadan, in the hope Muslims will be free to celebrate at the end of their holy month of fasting.

For example, during daylight hours on Monday they were touring villages in Bannang Satar district, informing residents about testing scheduled for after sunset on Monday and Tuesday.

Yala is the hotbed of virus infection in the southern border provinces, with 126 confirmed cases. Its numbers are behind only Bangkok, Phuket and Nonthaburi.

The province is conducting comprehensive tests, what is termed active case finding, in all districts  - targeting risk groups such as those who have contact with people returning from neighbouring countries.

Ramadan, which started on April 24, has posed a challenge for the officials, who decided not to do swab tests during the day, when Muslims are fasting. They not supposed to eat until after sundown. Ramadan is due to end in the evening of Saturday, May 23.

"We cannot conduct the tests during the daytime as people are fasting, including the Muslim staff at the office," Yala public health chief Songkran Maichum said. "My (Muslim) staff also don't have the energy," he added.

Dr Songkran said cooperation from community leaders was key to success. Only they could lead villagers to the designated locations where swabs will be taken for testing. (continues below) 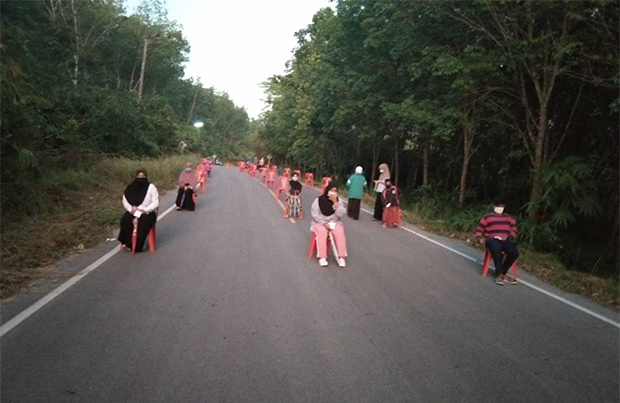 Residents keep their distance while waiting to be tested for the coronavirus at an undisclosed location in Yala. (Photo:Yala public health office Facebook account)

The first round of active case finding in Yala began in mid-April. To date, it has detected 40 new cases, 24 of them in Yaha district. But the results will not be confirmed until the samples are tested again in the labs at the Medical Sciences Department  of the Public Health Ministry, Dr Taweesilp Visanuyothin, the spokesman for the Centre for Covid-19 Situation Administration, said on Monday.

Most of the infections were in people who returned from working in Malaysia. Yala was the first province in the country to temporarily close a hospital for cleaning, in Bannang Satar district, after health personnel were infected with the virus.

With three weeks left of Ramadan, Dr Songkran said he hoped the comprehensive testing will be complete before the end of fasting, so the office can identify all virus-affected people and prevent it being spread to other people in the province. A crucial period is approaching, he said.

Muslims traditionallly celebrate the end of Ramadan with the Hari Raya festival, also known as Eid al-Firt. It is one of the most important events on the Muslim calendar.

"If our operation is complete in time (before the end of Ramadan), people can celebrate Hari Raya without measures like the provincial lockdown being in force," Dr Songkran said.

"We're tired," said a nurse at the provincial public relations office, in a video released on Sunday. "We are working day and night, but we will do our best."

"We will not give up," another nurse said. "If we help others, Allah will help us."