Virus toll on economy to linger

People wait to submit their complaints about the 5,000-baht cash handouts at the Public Relations Department on Soi Ari Samphan where social distancing was arranged due to the coronavirus outbreak. The previous venue was located underneath an expressway near the Finance Ministry. (Photo by Arnun Chonmahatrakool)

Thailand will likely continue feeling the economic blow of Covid-19 for another nine months, according to Prime Minister Prayut Chan-o-cha.

"We expect the impact on the economy to drag on for quite a while, not only three months, but possibly six or nine months," Gen Prayut said during a media briefing after the cabinet meeting on Tuesday.

"We need to prepare measures to cope with that," he added.

Gen Prayut said he is considering asking more wealthy businesspeople to cooperate in addressing the economic fallout from the pandemic, as he did with the country's top 20 moguls last month.

The government has launched a 1.97-trillion-baht package, the biggest relief program for the kingdom ever, to ease the virus' economic toll. 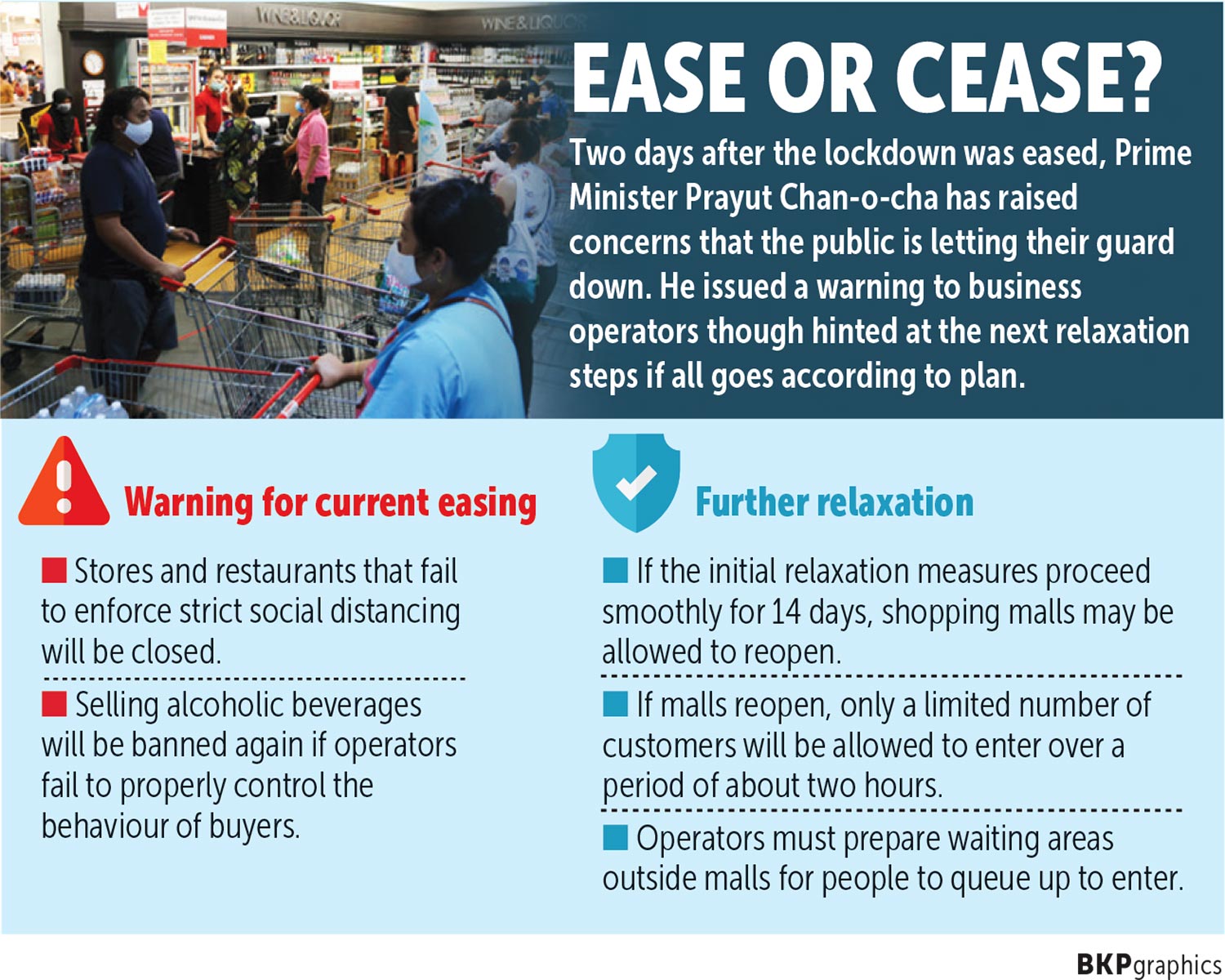 Of the total, one trillion baht is for cash handouts to people hit by the virus, public healthcare expenditure and economic and social rehabilitation.

In March, the Bank of Thailand forecast a 5.3% GDP contraction this year, compared with 2.8% growth previously predicted.

Gen Prayut also warned that stores that fail to enforce disease-control measures will be closed.

The government has begun to relax state of emergency measures with hopes of rehabilitating the economy.

His warning came after people were seen on Sunday flocking to shops to buy alcoholic beverages after the ban on the sale of alcohol was lifted in most provinces and Bangkok.

Gen Prayut said the government was preparing for the second stage of reopening if the initial stage proves successful.

He said that in the second stage, people would be permitted to visiting shopping malls for two hours at a time to help contain the virus.

The number of people allowed in at one time will also be restricted, Gen Prayut said.

The government plans to take two months to gauge the ramifications of its planned four stages to ease restrictions before deciding whether a full reopening of the kingdom can be considered.

Each stage will be assessed after 14 days.

Deputy Prime Minister Wissanu Krea-ngam on Tuesday said if shops selling alcohol are unable to manage customers, they will be shuttered.

"A warning will be issued first," Mr Wissanu said. "Everyone has been told to take care of themselves."

"Department stores must be careful too because [mismanagement] is dangerous for customers and staff," he added.

Provincial governors, as heads of sub-national disease control committees, have the power to immediately close shops, Mr Wissanu said, adding shuttered stores will need to ask the government if they can reopen.

Mr Wissanu said some reopened restaurants in Bangkok that failed to comply with disease-control measures have been shut down.

The ban on takeaway sales of alcoholic drinks was lifted in most provinces on Sunday. All stores were required to strictly observe disease-control measures, including social distancing and limiting the number of customers allowed inside at one time.

In addition, the Centre for Covid-19 Situation Administration, on Tuesday reported one new coronavirus case with no additional deaths, bringing the national tally to 2,988 infections with 54 deaths.

Dr Taweesilp Visanuyothin, the spokesman for the CCSA, said the new case was a Thai man, 45, in the southern province of Narathiwat. He also suffered from diabetes.

In April, the man fell sick with coughing, a fever, runny nose, a sore throat, phlegm and shortness of breath. He was diagnosed with pneumonia at a local hospital and tested positive for Covid-19 on Monday.