The Centre for Covid-19 Situation Administration (CCSA) says all Thais stranded abroad will be repatriated, as the government prepares to welcome about 7,000 returnees who will arrive between Thursday and May 31.

"Since April 4, we have already repatriated 4,637 Thais stranded in 27 countries across the world, and we are now planning to bring another 7,000 back by the end of this month," he said.

Dr Taweesilp said any Thai citizen abroad who wants to return must inform their Thai embassy of their plans, so quarantine arrangements can be made.

He stressed the 14-day state quarantine is mandatory for all returnees.

According to the CCSA, around 9,000 Thais overseas have lodged requests to return to Thailand.

The largest number of requests came from Thais in the United States, which has the highest confirmed number of virus cases and fatalities.

"Those seeking to return must contact the nearest Thai embassies or consulates as soon as possible because the government needs to know the number of returnees and their date of arrival," he said.

Those who registered earlier will be prioritised, he added.

Prime Minister Prayut Chan-o-cha on Wednesday also ordered the MFA to do its best to help all Thais who want to return home.

on Wednesday, 161 Thais arrived at Suvarnabhumi airport on a repatriation flight arranged by the Royal Thai Consulate-General in Hong Kong, along with 131 other Thais from the Maldives.

Dr Taweesilp added that 59 Thais from Myanmar, 110 from Germany and 122 from Pakistan are scheduled to arrive today, while 150 Thais from South Korea and another 150 from South Africa will arrive tomorrow. 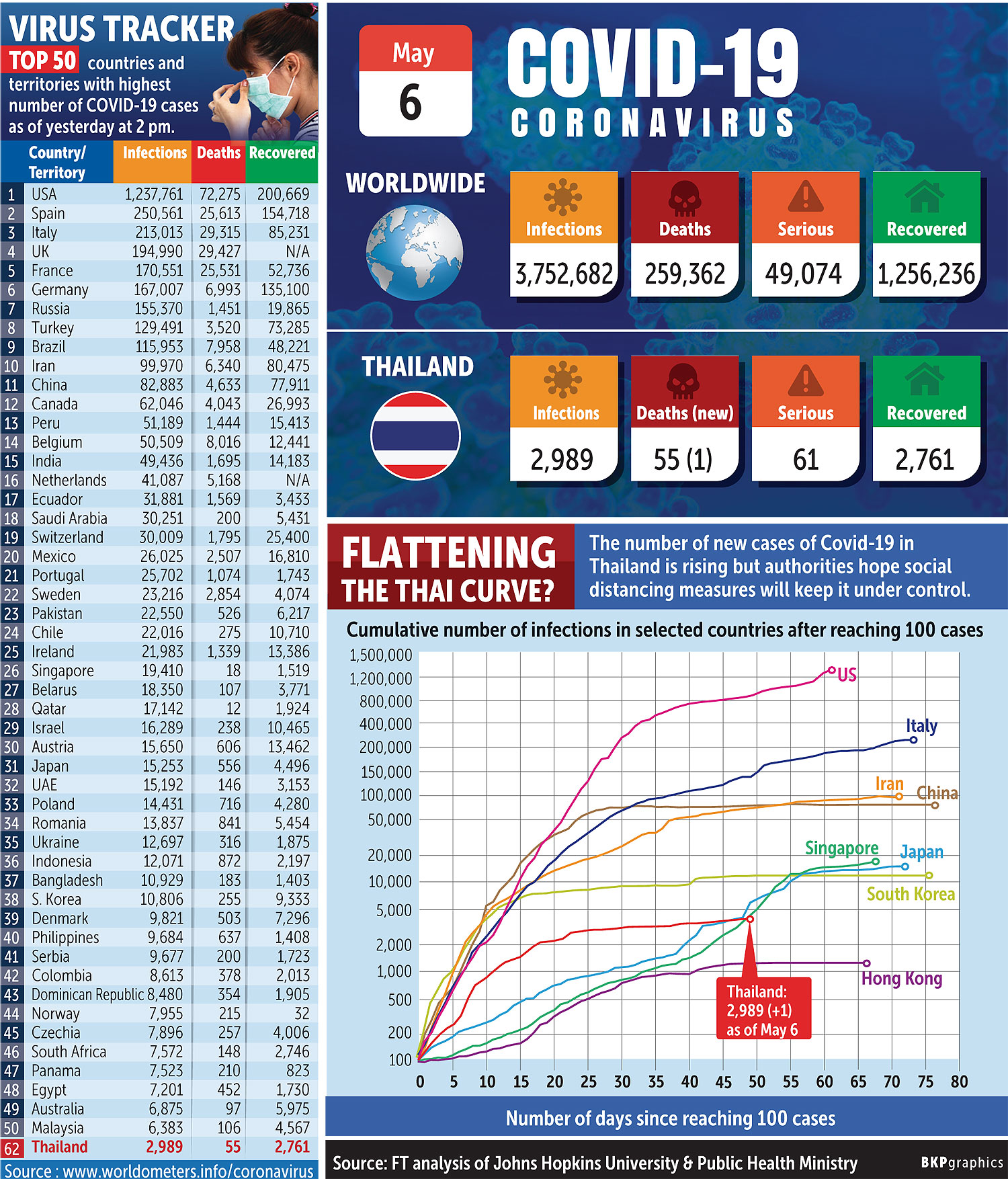 The government has also organised special flights to repatriate Thai citizens stranded in the United Arab Emirates, Egypt, Japan, the Netherlands, Vietnam, Taiwan, India, and the US. The flights will depart between May 8-11.

The government has prepared 796 state quarantine facilities nationwide with 20,941 beds to handle the influx, he said.

Dr Taweesilp said that from April 3 to May 5, state quarantine facilities accommodated 12,847 people.

From that total, 8,026 are still in quarantine, 85 tested positive for Covid-19, while the rest have been discharged.

A total of 1,481 people will return from the United States, Europe, South Africa, and Middle Eastern and Asian countries between now and Sunday, he said on Wednesday.

Security officials will be working closely with health officials to ensure that the returnees are carefully screened and quarantined, he said.