Perils lurking amid the waste

Surat Sitthipanya is an early riser whose job is to help collect the city's rubbish.

Mr Surat and fellow rubbish collectors set off either late at night or early morning. They don protective gear before hopping on the back of the green trucks which take them along the roads, narrow streets and through communities as they attend to a task most of us would rather not think about.

Almost effortlessly, they lift the bins and empty rubbish into the truck. Hundreds of green trucks ply the city each night picking up their rubbish haul.

Few residents can tolerate the sight and smell of waste, which explains the popular conception of them being unsung heroes. However, the praise is hard-earned as the collectors' work exposes them to danger, from disease transmission to the risk of explosions.

Since the coronavirus pandemic started two months ago, the collectors employed by the Bangkok Metropolitan Administration have donned protective gear and adhered to strict standards in hygiene. Rubbish is also gathered, delivered and disposed of under tight disease containment measures. 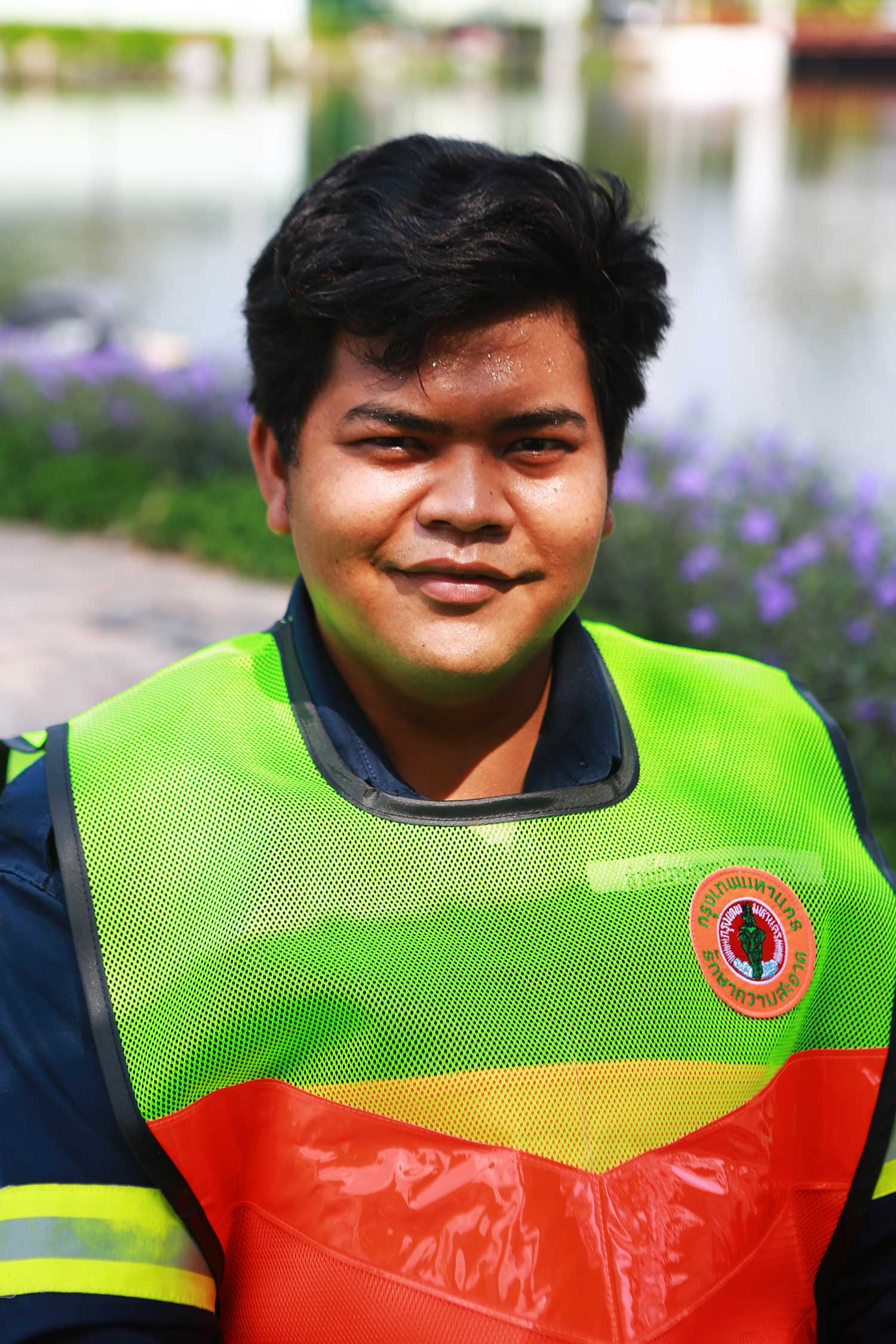 "It took me more than a year to get used to using my left hand. It was hard going about my routines because naturally I'm right-handed." — Surat Sithipanya, a garbage collector

Mr Surat once encountered danger of another sort when a bomb hidden among rubbish went off. At the height of the Songkran festival on April 14, 2015, Mr Surat, who was 21 at the time, turned up for work early.

While he was dumping rubbish outside a housing estate in Soi Watchirathamsathit 12, also known as Sukhumvit Soi 101/1, a ping-pong bomb which someone threw in waste went off, leaving him seriously wounded while two other workers sustained minor injuries.

Mr Surat spent two months in hospital. Doctors amputated the middle and ring fingers on his right hand after they were badly mutilated by the blast.

"It took me more than a year to get used to using my left hand. It was hard going about my routines because naturally I'm right-handed," he said.

Mr Surat said he held no grudges against whoever left the bomb which cost him his fingers. "All I can tell myself is that it was fate," he said.

After the incident, the Bang Na district office upgraded his employment status from that of a temporary worker to a permanent one. He is entitled to welfare benefits which are almost equivalent to those offered to civil servants.

"At least there was one silver lining for me," Mr Surat said.

Koon Jiangchai, 49, another garbage collector, said Covid-19 infection is an ever-present danger for people in his line of work.

"We can't afford to neglect safety. We always wear a face mask, gloves and boots when we go on collection rounds," said Mr Koon who is in charge of collection duties directed from the Bang Na district office.

When he returns to his home in Soi Onnut 86, he washes himself for longer and more frequently. "We need to be part of the solution, by not spreading the disease, and not the problem," he said, adding; "It's all about social responsibility."

The BMA provides collectors and street sweepers with washable face masks and bars of soap.

Mr Koon said he believes more people understand the role of garbage collectors in keeping the city clean and helping curb the transmission of diseases.

"There's less distance between residents and us now," he said. Many give collectors food, drinking water and snacks in appreciation of their service.

Mr Koon added that despite being cautious and wearing gloves, several collectors have sustained cuts after picking up rubbish that included broken glass, nails and meat skewers.

He said collectors who are new to the job are mostly put off by the smell of the rubbish. But they soon get used to it.

"We don't have much education. That's why there aren't that many options for us when it comes to a career," he said.

Although the Covid-19 infections are falling, the public should remain vigilant. They can do their part to control the virus by dropping used face masks in a separate bag before throwing them away along with other waste, Mr Koon said.