People rushed back to shopping malls on the first day of business resumption on Sunday. (Photo by Apichit Jinakul)

A shorter curfew period, inter-provincial travel and a trial of school reopenings with a reduced ratio of teachers per schoolchildren will be considered for the next stage of lockdown easing as coronavirus infections continue to fall.

Meanwhile, the Centre for Covid-19 Situation Administration (CCSA) on Friday endorsed a recommendation to extend the state of emergency for another month.

In the meeting, Prime Minister Prayut Chan-o-cha, who chairs the CCSA, instructed the National Security Council (NSC) to consider the third stage of lockdown easing, according to Culture Minister Itthiphol Kunplome who attended the meeting.

He said the next stage of relaxation could include a one-hour shorter curfew period from midnight-4am, inter-provincial travel resuming, and hotels reopening. 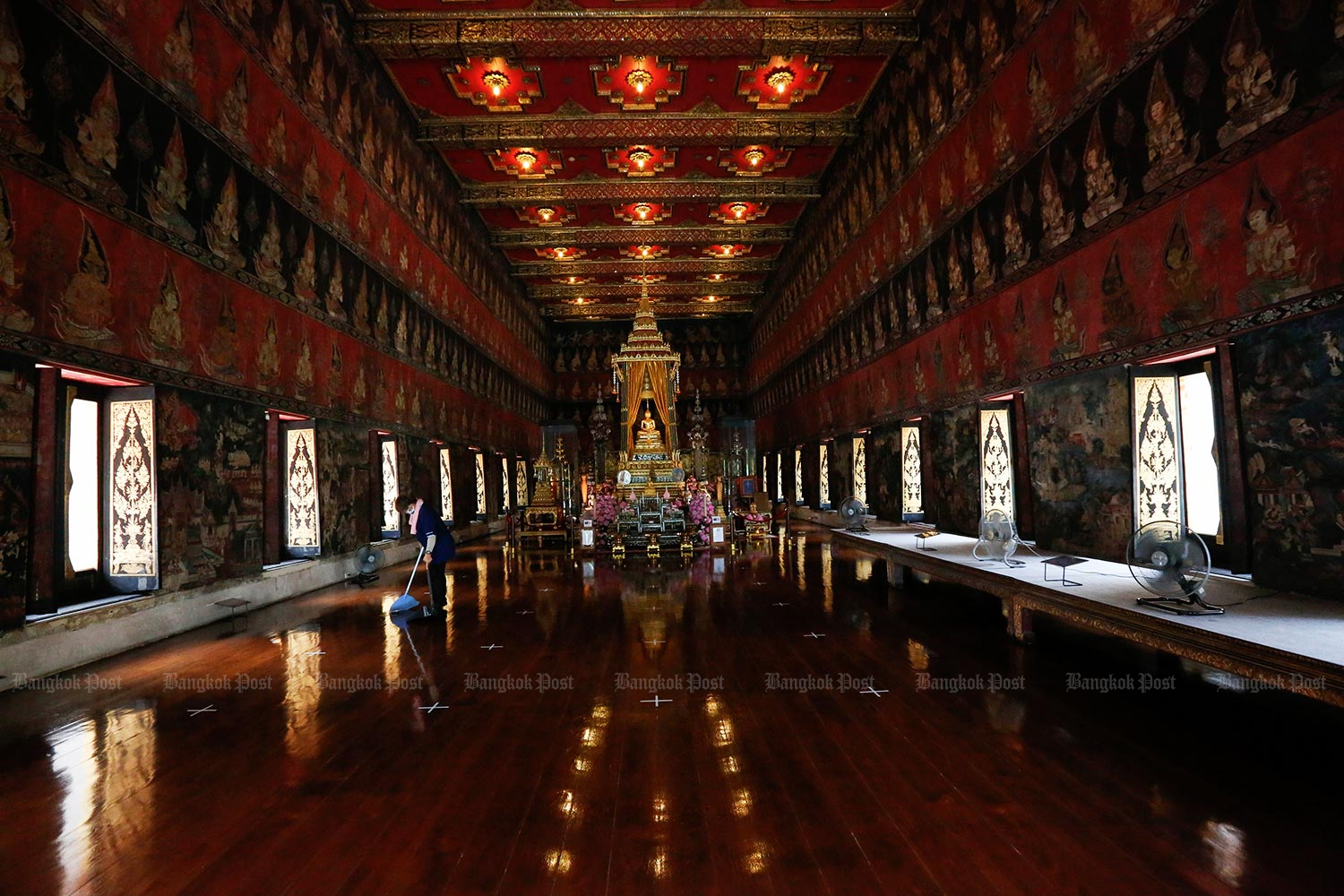 Opening wide: A woman sweeps the floor inside the National Museum in Bangkok. Markers on the floor are used to designate where visitors should stand as the Fine Arts Department reopens national museums and historical parks to the public after two months of closure due to Covid-19. (Photo by Pattarapong Chatpattarasill)

Last Sunday, the CCSA shortened the night curfew from 10pm-4am to 11pm-4am, and let shopping centres and some businesses reopen.

Mr Itthiphol also said the NSC will meet to discuss the details on May 27 or 28.

He also quoted Education Minister Nataphol Teepsuwan as telling the meeting that some boarding schools and international schools will have a trial reopening on June 1, while the official reopening for all schools nationwide will be on July 1.

"However, Gen Prayut expressed concern about the reopening of schools and stressed the need for physical distancing among schoolchildren and teachers to reduce the risk of Covid-19 infection," Mr Itthiphol quoted the premier as saying.

To observe social distancing, the Education Ministry has decided to reduce the ratio of teachers per students in each class from the current 1:20 to 1:7.

Meanwhile, CCSA spokesman Dr Taweesilp Visanuyothin told the media on Friday that the meeting agreed on the need to extend use of the emergency decree from the end of this month to the end of June, as recommended by the NSC.

The decree is the primary legal basis of the CCSA's campaign against the spread of the virus.

Dr Taweesilp said the extension was necessary because the country was still battling to contain the Covid-19 pandemic and prevent new infections being brought in from abroad.

Next Tuesday, the cabinet will rubber stamp the extension of the state of emergency, he said.

Dr Taweesilp said further easing of the lockdown will be done gradually.

He said the idea of reducing the curfew period had been raised on Friday by Chief of Defence Forces Gen Pornpipat Benyasiri.

The curfew period cut proposal will be discussed next Friday, when top CCSA officials will consider allowing more business types to reopen on June 1, in what he called the third phase of the easing process.

"There is a good chance that the CCSA will shorten curfew hours. The duration of the curfew hours and when and how it will be enforced will be discussed at the next meeting," he said.

Relaxing the curfew however would depend on public cooperation with virus-control measures, he said.

Dr Taweesilp did not reveal what types of businesses to be allowed to resume next month.

He also said that no new Covid-19 cases were reported over the past 24 hours, but people should remain cautious because there were still infected people in communities.

Dr Taweesilp said that between May 8 and May 21, 45 people tested positive for the disease. Twenty of them were infected in other countries and were quarantined on return to Thailand. The other 25 caught the disease locally.

The 25 local infections consisted of 11 people who were in close contact with previously confirmed cases, six were found by pre-emptive testing in communities, five had visited crowded places, and three people worked in at-risk professions.

"The 25 people had been around in everyday life and this proves that infected people are still out there. So, people cannot be reckless," Dr Taweesilp said.