Wim Sonsuk, 59, third from left in a police vest, is escorted by police during the crime re-enactment on Thursday. He is charged with murdering three people, and wounding another, at the Phitsanulok station of Radio Thailand, where he was employed as an electrician, on Wednesday. (Photo: Chinnawat Singha)

PHITSANULOK: The sole suspect in the triple-murder at the Radio Thailand station in Phitsanulok was taken for a crime re-enactment amid tight security on Thursday morning.

The accused killer, Wim Sonsuk, 59, an electrician at the radio station, was escorted to the scene by more than 50 police, both in uniform and plainclothed, around 9am.

The suspect has allegedly admitted shooting dead three staff members - Sanit Butmangkul, the station director, Jirawut Sumetthepanan, a senior electrician, and Phumisaran Phanphum, a senior technician - in a rampage that began about 11am on Wednesday.

Mr Wim was first taken to the lobby, where he had killed Jirawut, 47, who was up a ladder adjusting the security camera. He fired three shots, inflicting immediately fatal wounds.

Police then took the suspect to the spot where he admitted firing five shots at Phumisaran, 55, killing him.

The next victim was Prung, 56, who entered the station and saw what was happening. The bullet hit the man in the mouth, inflicting a serious wound.

Mr Wim was then taken to a fourth spot, behind the station building, where he admitted stabbing station director Sanit, 60, with a knife, and shooting him.

After the 30-minute re-enactment, police took him back to a cell in Muang police station. He was being held in custody while they prepare a case to present to the court on Friday, when they will apply to further detain him. (continues below) 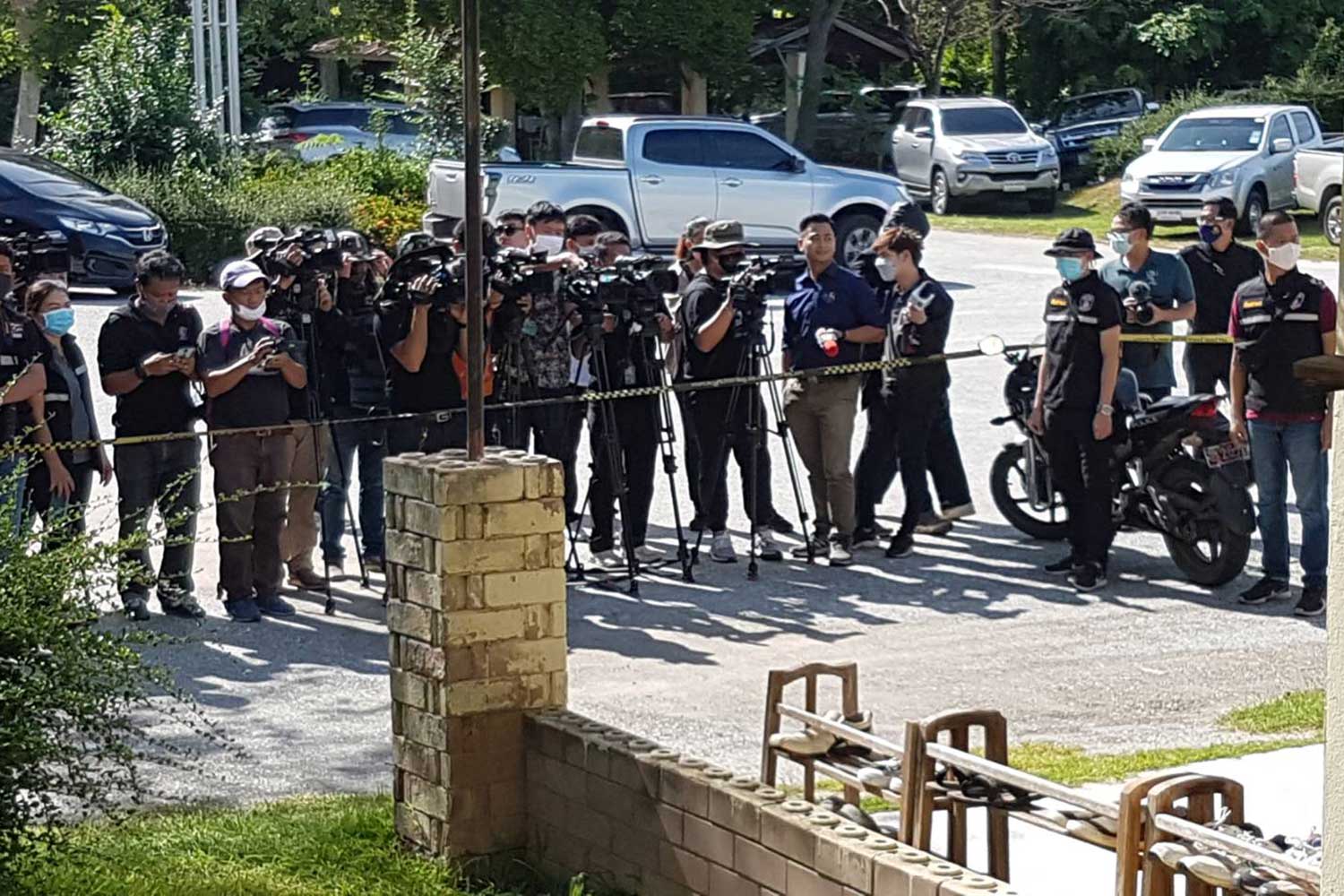 Mr Wim spoke to reporters during the re-enactment, at times rambling incoherently. He said that whenever he had a problem he would count from 1 to 10, or even to 1,000, to calm himself down.

He mentioned being superstitious, and ended the conversation by saying people in government service who want career advancement have to "lick" and serve alcohol to the boss, using the impolite term daek for to eat and drink.

Mr Wim said that before the shooting spree he was taking some medication when Jirawut phoned and asked him to find an Austin air core transformer, used in powering the antenna,

He found the transformer, but when Jirawut returned to the office he said it was not the one he was looking for, Mr Wim said. He told reporters Jirawut was usually stern-faced whenever he saw him.

He also claimed Phumisaran stirred people against him at the office.

After shooting the first man, he opened fire at Phumisaran, who tried to escape. He gave chase and shot him dead.

The gunman said he walked out of the office and did not know where the station director was. He claimed Sanit then suddenly attacked him from behind. So he fought back.

He pulled a knife from his bag, stabbed the station director in the chest and fired shots at him. He said he had no grudge against or conflict with Sanit. He just lost his temper.

He admitted he shot all four men, saying his life was now over.

The motive was conflict between the suspect and his fellow electricians. Mr Wim had a health problem and often made mistakes while working. He had earlier quarrelled with his two colleagues over a lost item, the police chief said.

Investigators would check his health record at Buddhachinaraj provincial hospital.

Mr Wim is charged with murder, attempted murder and illegal possession of firearms. Police will oppose bail when he appears in court on Friday . 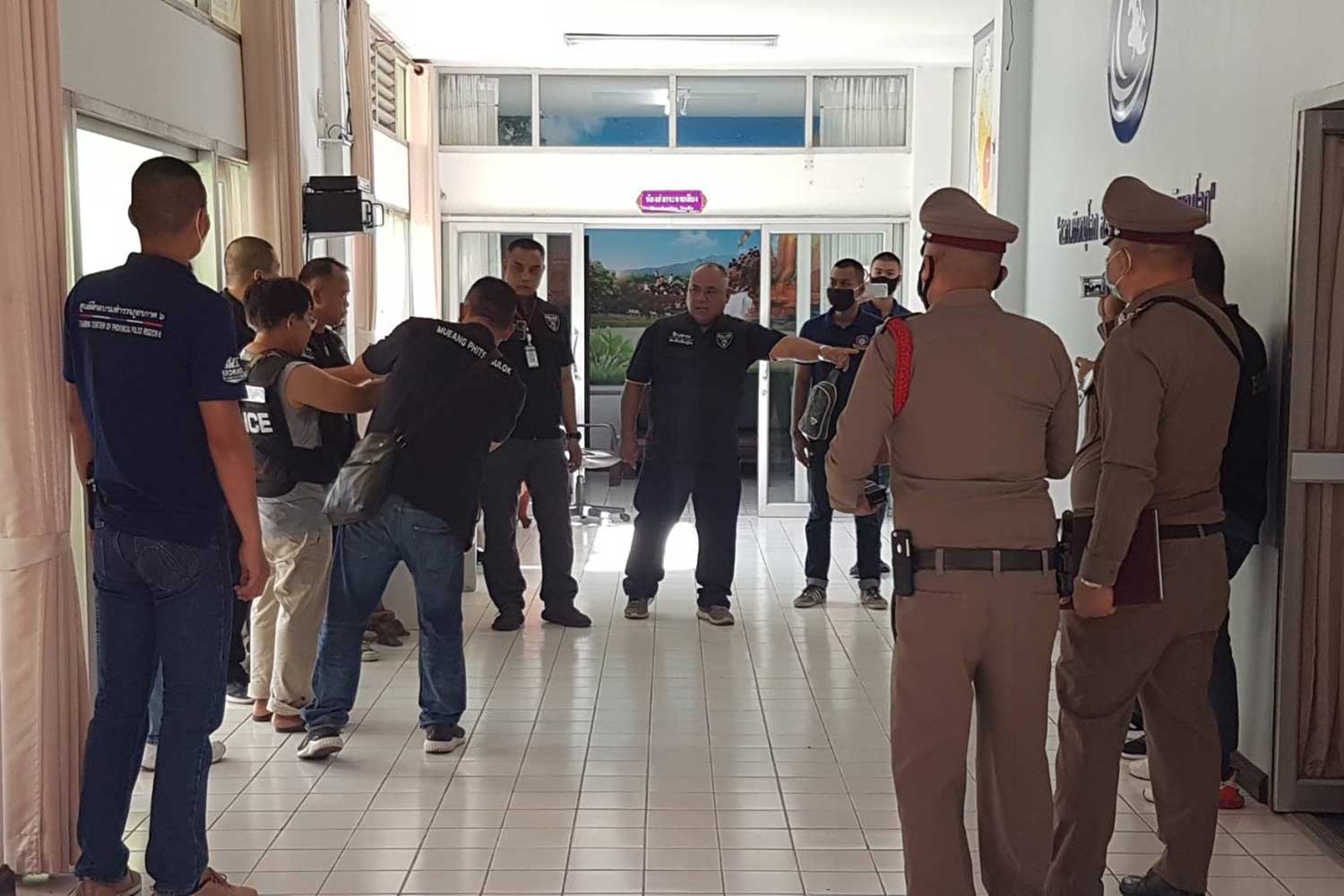 The gunman, wearing glasses and a police vest, inside the radio station premises during the re-enactment on Thursday. (Photo: Chinnawat Singha)