A police officer has been suspended as an investigation continues into the mysterious death of Tia Morchor, a famous dog beloved of Chiang Mai University (CMU) students and alumni.

The advocacy group praised the decision as a milestone in an attempt to unveil the killers of Tia Morchor. The group indicated there could be more than one person involved in the case as the sacked officer was called “the first suspect”.

No details of the suspect were released but Thairath reported earlier he was a 27-year-old police corporal in the Border Patrol Police unit based in San Sai district of Chiang Mai province.

He was charged with theft, torturing animals and disposing of the carcass of an animal, according to Thairath.

Thai PBS reported on Wednesday the suspect claimed he took the dog for a pleasure drive but it was run over by a vehicle.

Watchdog Thailand said on Wednesday another suspect could face an arrest warrant from Bhubing Rajanives police station in Chiang Mai, the station that has jurisdiction in the case. 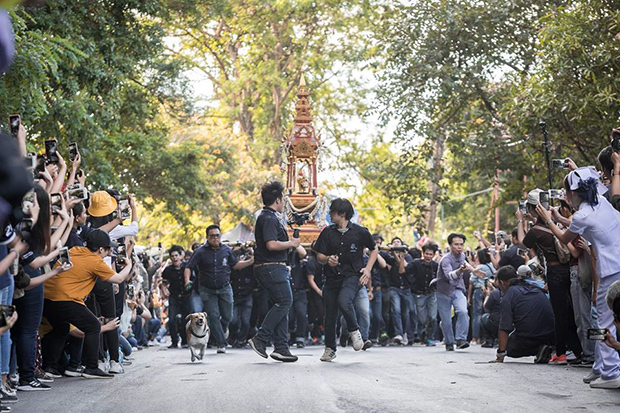 Tia Morchor leads new students on a traditional walk from the campus to the top of Doi Suthep. (Photo from Tia Morchor Facebook account)

The dog went missing from the campus on May 4 and its body was found in roadside jungle behind Rajamangala University of Technology Lanna on May 7. Footage from CCTVs both inside and outside the CMU campus showed the dog being driven on a motorcycle on the night of May 4.

Tia Morchor is a darling of CMU students, past and present, along with staff members. One of its well-known trademark activities was to lead new students on a long walk up the Doi Suthep mountain to pay respects to the temple. The dog's age was believed to be eight or nine.

The friendly dog was first spotted on the campus in 2014, and was seen there constantly until its recent disappearance. Tia Morchor was believed to stay at a house near the university at first, but was then given an official home at the Science Faculty. It roamed everywhere and was beloved by everybody. The dog was so popular that it has its own Facebook page, tiadogcmu, and Twitter account, @tiadogcmu. The canine inspired CMU to launch a project to manage and take care of all dogs around the sprawling campus.

The cause of Tia Morchor's death has yet to be conclusively determined. A preliminary autopsy conducted  by the university's Animal Hospital found that it was hit by a large vehicle, suggesting that it was an accident. But another detailed probe showed the dog might have been killed deliberately. 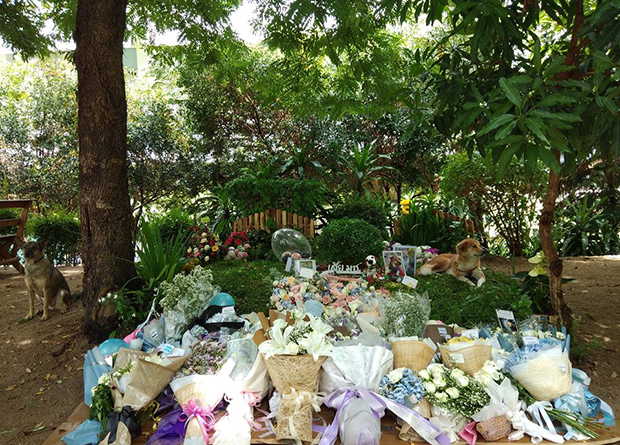 Flowers are laid at the place where the dog was buried on the Chiang Mai University campus. (Photo from Tia Morchor Facebook account)

Animal rights activists later sought help from the Royal Thai Police Office in Bangkok, urging transparency in a case they believed was connected to at least one police officer.

Fans of Tia Morchor flooded Watchdog Thailand's Facebook page with comments after it posted the news of the police officer's suspension. They demanded legal action against anyone responsible for the death, and posted fond remembrances.

“We won’t see Tia on the next trip up Doi Suthep,” bibi wrote in a message on the dog’s Twitter account.