People grab their favourite spots on Bang Saen beach in Chon Buri as they enjoy the public holiday yesterday to mark Her Majesty the Queen's birthday. (Photo from Teeneechonburi Facebook Page)

Popular beaches were teeming with visitors on the first public holiday on Wednesday since their closure due to the Covid-19 pandemic two months ago, with Bang Saen beach in Chon Buri almost bursting at the seams.

A heavy build-up of traffic was seen heading to the beach on Wednesday morning, a public holiday to mark Her Majesty the Queen's birthday. People seemed to be taking full advantage of the easing of inter-provincial travel restrictions that came into effect at the start of the week. 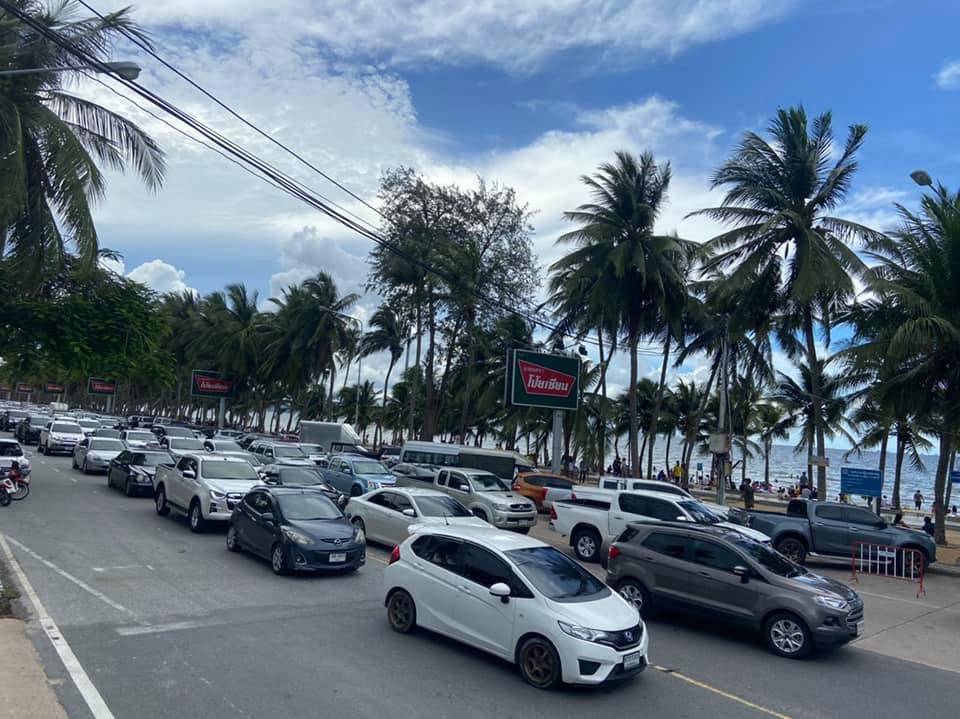 On his Facebook, Mr Narongchai explained the beach was too packed, making it almost impossible for people to practise social distancing.

The mayor also posted aerial pictures of the beach on Wednesday showing vehicles clogging the entire stretch of road adjacent to the beach. Three of the road's four lanes were occupied by parked cars.

Insisting stringent rules must be laid down, Mr Narongchai said that from tomorrow vendors and food hawkers can resume trading along the beach. However, the sale of alcohol will be banned.

Seven areas on the beach will be free of beach chairs. Where chairs are permitted, there must be plenty of space between each chair, while customers are required to wear a face mask. Those renting the chairs out are required to checks the body temperature of their customers and provide them with alcohol sanitiser gel.

Bang Saen beach, which attracts a lot of weekenders because of its easy access and its close proximity to Bangkok, will also be closed on Mondays for cleaning.

The municipal office said beach chairs may only be put up on the beach from Fridays to Sundays. At other times they must be removed for the sake of orderliness.

Mr Naronchai said non-chair areas are being designated so people can enjoy wide open spaces on the beach.

Under the "new normal" regulations, visitors must wear face masks at all times while on the beach and must leave it by 11pm. It was reported that at the busiest time on Wednesday, at least 5,000 visitors were on the beach and most had driven there. The mayor said authorities will block traffic on roads leading to it when necessary to control the number of people.

On Wednesday, the number of beach-goers sparked fears among municipal officials about a possible resurgence of Covid-19 infections. Chon Buri has not reported a coronavirus infection in 40 days.

Jutharat Saensuk, 24, said she was pleased the beach was opening again and people had been looking forward to ending weeks of confining themselves at home by strolling along the beach. She travelled all the way to Bang Saen with seven members of her family from Nakhon Ratchasima.

Elsewhere, beaches in Hua Hin of Prachuap Khiri Khan also came back to life as seaside vendors and restaurants welcomed back customers, although many of them were local residents.

In the eastern province of Trat, ferries were back in business transferring tourists between the mainland and islands including the popular Koh Chang.

Koh Samed in Rayong remains closed as it is located in a national park. Local tourism associations have appealed to the Department of National Parks, Wildlife and Plant Conservation to reopen the island.