The government is considering measures that would allow the resumption of 12 types of businesses and activities -- including pubs and concerts, parlours offering soapy massages, and sports competitions. 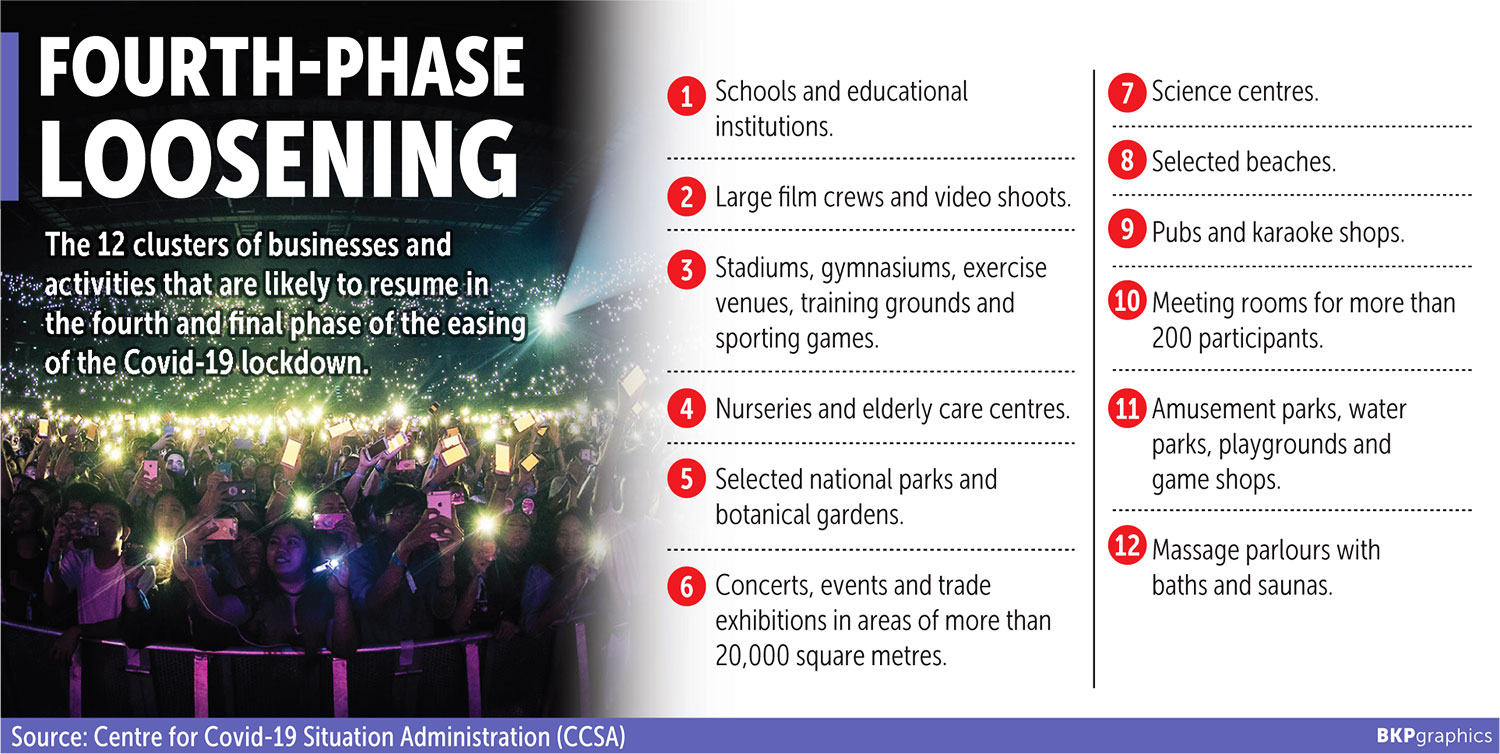 Taweesilp Visanuyothin, spokesman of the government's Centre for Covid-19 Situation Administration (CCSA), said yesterday the CCSA's business resumption committee had invited operators and organisers to discuss measures needed to control the spread of the coronavirus.

The committee is headed by the secretary-general of the National Security Council, Somsak Roongsita.

"The government will hear from the operators what their plans are for preventing virus transmission and we will see how we can cooperate," Dr Taweesilp said.

Some of the 12 business/activity types were already allowed to resume partial services. Officials would discuss measures for the resumption of more services at these premises, he said.

He made reference to sports fields, where practice is now allowed. He said they were discussing disease-control measures for sports competitions.

The upcoming relaxation of restrictions would also apply to bigger film crews for large settings, the reopening of classrooms, daily visits to elderly care centres, and national parks.

Dr Taweesilp said measures were also being set for concerts and event halls of more than 20,000 square metres, education-oriented science centres, and beaches.

Seventeen new Covid-19 infections were reported yesterday, all returnees from the Middle East and mostly asymptomatic.

"The two-digit figure is very high, but is from the daily arrival of returnees," Dr Taweesilp, said.

Meanwhile, Maj Gen Burin Thongprapai, director of the army's Office of the Judge Advocate who chairs a panel investigating the Covid-19 transmission at Lumpinee Boxing Stadium, said army chief Apirat Kongsompong has sacked the management of the army-run stadium in line with the recommendation of the investigation panel.

Previously, Maj Gen Rachit Arunrangsi, head of the Army Welfare Department and manager of the stadium, who was among those infected by the virus at the stadium, was transferred to an inactive post after the incident.

He will retire at the end of September 2022.

A cluster of infections during a boxing event at the stadium on March 6 was blamed for a surge in the number of coronavirus cases in the following days.

Also yesterday, Prime Minister Prayut Chan-o-cha said he was still concerned people may be at risk of infection at this stage of the unwinding process if they flock in large numbers to tourist spots and beaches, such as Bang Saen beach in Chon Buri province.