Two arrested over land dispute that led to courtroom shootout

A Crime Suppression Division officer shows a document to two men wanted for false statements and embezzlement of 3,800 rai of land in Chanthaburi province. (Photo supplied)

CHANTHABURI: A man and his son have been arrested for making false statements and embezzlement over a land dispute that led to last year’s multiple shooting in a Chanthaburi courtroom.

Officers from the Crime Suppression Division’s Hanuman special force on Tuesday morning executed a search warrant at a house in tambon Khlong Phlu of Khao Kitchakut district of this eastern province.

The two men were wanted on an arrest warrant issued by the Criminal Court on charges of making false statements to the court and officials, and colluding in embezzlement.

The arrests came after the Athitham Mahathat Witthayalai Foundation had sent a representative to file a complaint with police against Mr Boonchuay, the younger brother of the late Phra Kittiwuttho Bhikkhu, former chairman of the foundation. He alleged embezzlement of the foundation’s 3,800 rai of land, mostly in Khao Kitchakut district and the rest in Tha Mai district of Chanthaburi province.

Mr Boonchuay is accused of giving false statements to the Civil Court and other officials when applying for land title deeds.

During 1970-1972, respected monk Phra Kittiwuttho had founded the foundation and solicited public donations to buy the land from Somphon for 12 million baht, for use for religious activities. The monk had paid 8 million baht to the land's occupant, and still owed the remaining 4 million. Somphon had allowed the use of his land.

The monk had assigned his younger brother, Boonchuay, to oversee the land.  In 2005, Phra Kittiwuttho died. Afterwards, Mr Boonchuay and his son decided to occupy the land.

Somphon had died and his son, Rewat Kosalanand, inherited the land.

Between 2011 and 2012, Mr Boonchuay had applied for land title deeds for the Sor Por Kor land. This caused the value of the land to go up.

Somphon's grandchildren, Ms Khemjinda Banthoonniphit and Pol Maj Gen Tharin Chantratip, were upset because the land had not been used for religious purposes as intended. They filed suit with the court.

The dispute escalated when Pol Maj Gen Tharin fired the shots that killed two people and wounded another one in a Chanthaburi courtroom on the morning of Nov 12 last year.  Pol Maj Gen Tharin was in turn shot dead by paralegal Thanakorn Theerawarodom.

The fatal courtroom shooting drew public attention to the land dispute. The case was later transferred to the CSD, which compiled a case against the man and his son. They were arrested on Wednesday morning.

The CSD special force took the two suspects to the CSD head office.

Boonchuay Charoensathaporn, 80, right, is arrested on a court warrant, together with his son, for alleged false statements and embezzlement of 3,800 rai of land in Chanthaburi. (Supplied photo) 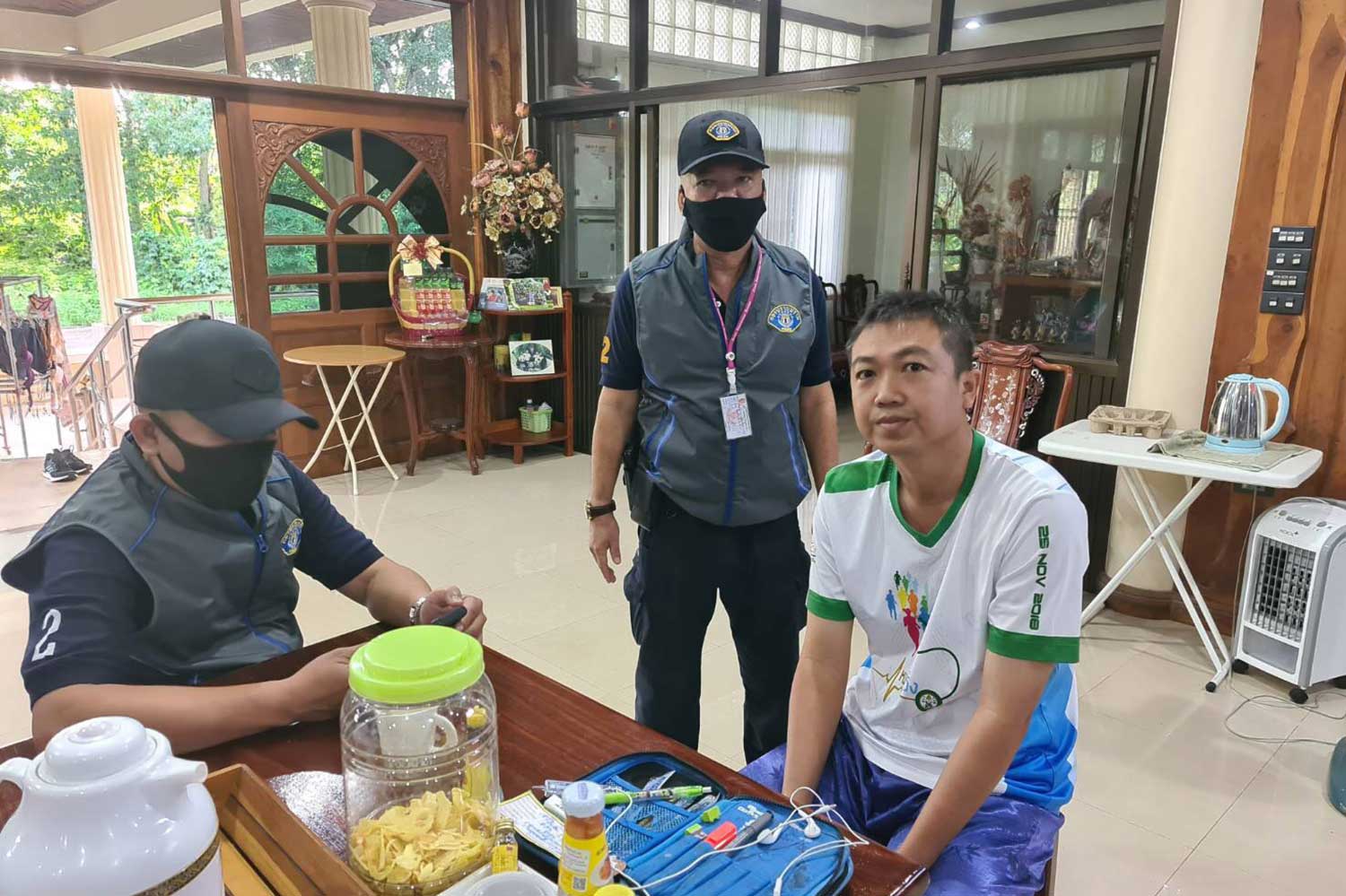