Pistol shots fired as war of the cockles escalates

Santi Nuansaen is seen on a jet ski shooting a pistol to disperse coastal fishermen raiding his cockle farm in the sea off Phunphin district of Surat Thani province on Wednesday.

SURAT THANI: An irate cockle farmer fired pistol shots into the air on Wednesday as coastal fishermen raided his illegal breeding vats in the sea off the coast of Surat Thani, as the cockles war continued unabated.

Phunphin district police charged Santi Nuansaen with discharging a firearm in a public place after he was seen riding a jet ski and firing a pistol while chasing off 300 fishemen in boats collecting cockles in an area he has laid claim to. (continues below) 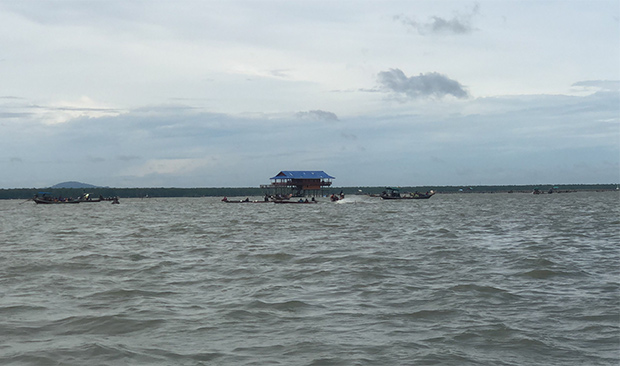 A roofed platform in the sea to used to protect a cockle farm off the coast of Surat Thani. (Photo: Supapong Chaolan)

Mr Santi, 29, told police he had paid 2.2 million baht for young cockles, or hoi kraeng, and was breeding them at his 30-rai sea farm. He countered the police charge by registering a complaint with them against the intruders.

It was the latest in a series of incidents in the area showing the growing conflict between coastal fishermen and those claiming ownership over parts of the sea off Surat Thani.

The Royal Thai Navy and provincial authorities are caught in between, trying to return areas where cockle farmers are illegally occupying the sea to the public domain.

Investors have occupied areas off Phunphin, Muang, Kanchanadit, Don Sak, Chaiya and Thachang districts, developing them as private farms breeding the profitable bivalve, also known as the blood clam. Coastal fishermen argue that the areas are public, and that they have the right to harvest the shellfish.

Cockle farmers have occupied an estimated 300,000 rai off the coast of the six districts.

Surat Thani governor Witchawut Jinto said on Wednesday that the sea 5.4 kilometres off the coast is not  private property and small-scale fishermen are entitled to catch cockles there.

Mr Santi’s mother, Chanpen, called for fairness, saying her son had invested a huge amount of money into farming cockles - only to see local fishermen trying to harvest them for free. (continues below) 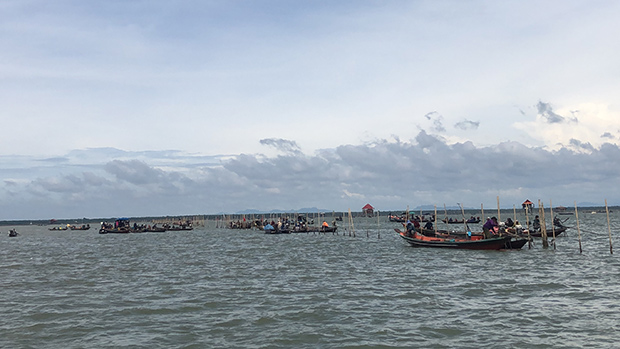 The conflict came to light recently when coastal fishermen accused three policemen in Kanchanadit of extorting money from a colleague in exchange for dropping charges of purchasing baby cockles they claimed hand been harvested illegally.

Breeders have built bamboo fences to define their sea farms, and keep a watch out for intruders from raised, roofed platforms, even though the area is open to the public. Provincial officials estimate there are 1,000 of these raised huts off the Surat Thani coast, 80 of them in Phunphin and Muang districts.

The non-governmental Forest and Sea for Life Foundation has called for the province and the navy to return the occupied sea to the public, protect coastal fishermen from threats, and strictly enforce the law to save the marine environment.

Influential figures are also reportedly involved in the illegal farming, occupying the sea and leasing the areas out to blood clam investors.

VAdm Samrueng Chanthaso, commander of Royal Thai Navy Region 2, on Friday promised to return the areas to the public by dismantling the fences and huts, beginning with Muang and Phunphin districts and then expanding to other districts experiencing the same problem.

He promised to find a solution to dispute between people occupying the sea and coastal fishermen.

Prasert Chanjukorn, kamnan of tambon Lelet in Phunphin, on Friday asked for breeders to be allowed more time.

He had spent a lot of money buying young cockles as seed stock and placing them to breed in the sea, he said.

“A solution to the problem should take into account the benefits and losses of coastal fishermen, cockle farmers and the economy of the province,” he said.