Metropolitan Police Division 8 conduct a crowd control drill at its headquarters in Bangkok's Chom Thong district on Wednesday. The exercise was carried out amid the easing of lockdown and Covid-19 restrictions that may soon open the way for public gatherings and protests. (Photo by Pornprom Satrabhaya)

Restaurants, hotels and eateries are likely to be allowed to serve alcoholic beverages on their premises in the fourth phase of easing the Covid-19 lockdown under a proposal to go to the Centre for Covid-19 Situation Administration (CCSA) on Friday.

Also, the night curfew could be lifted for 15 days, as a trial, but the emergency decree will remain in force to ensure containment of the coronavirus disease.

Alcoholic beverages will be allowed to be served at restaurants, hotels and eateries. However, the relaxation measure would still exclude pubs, bars and karaoke venues, which are considered to pose a greater danger of coronavirus disease transmission, Taweesilp Visanuyothin, spokesman for the CCSA, said.

Concerts, day care centres, and saunas would also be allowed to reopen in the fourth phase, he added.

The CCSA would consider the measures tomorrow and the relaxation was expected to take effect next Monday, he said. 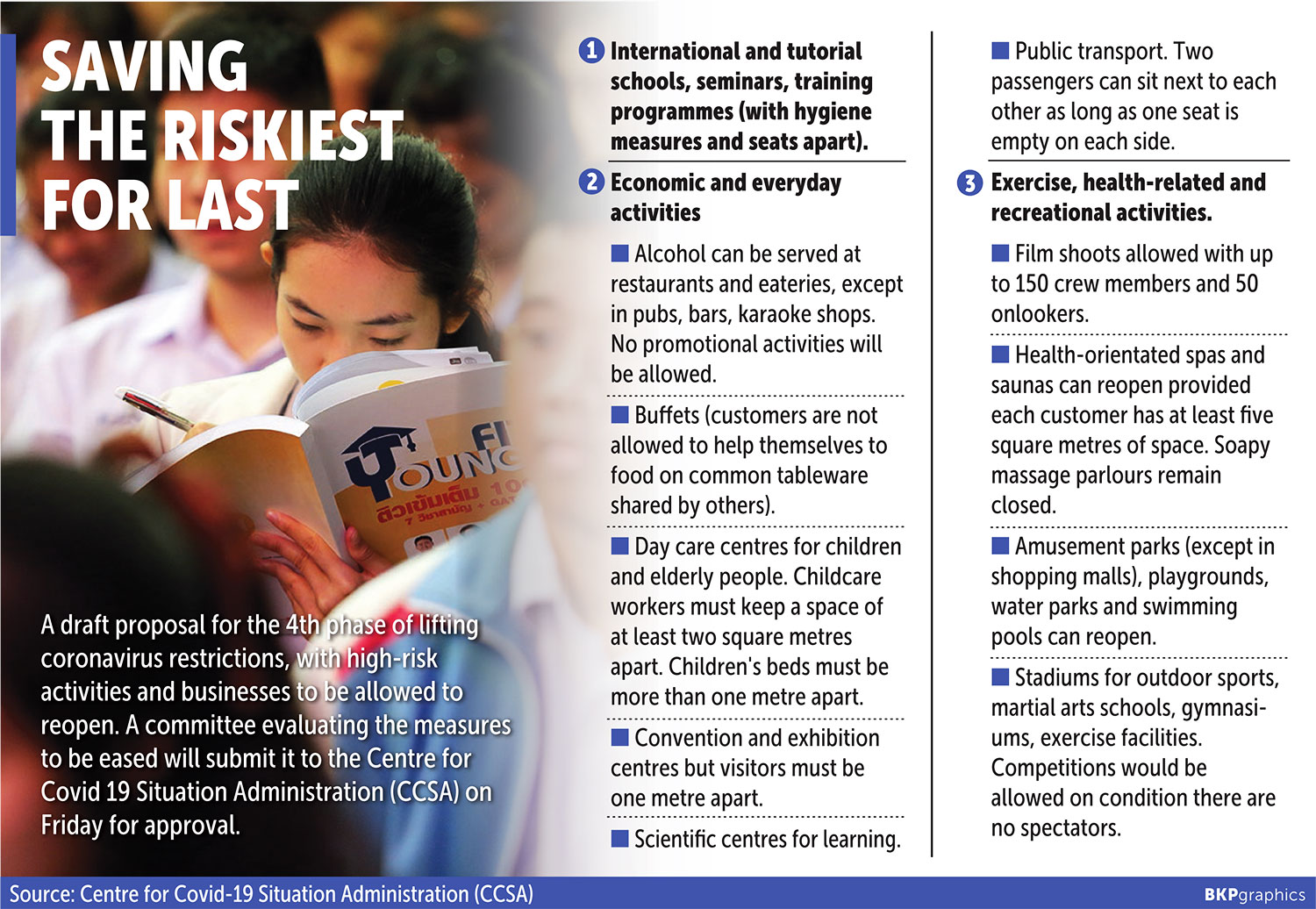 The proposal would also allow international and tutorial schools to reopen and government organisations to resume holding meetings and seminars.

Day care centres for children and elderly people could reopen, as could scientific centres for learning. Convention and exhibition centres would be permitted to open their doors again, but visitors must be at least one metre apart from each other.

Events would be allowed if visitors were seated at least one metre apart. Sports competitions could take place as long as there were no spectators, he said.

Concerts would be allowed on condition that audiences did not sing along exuberantly, because that could spray droplets, Dr Taweesilp said.

On public transport, two passengers could sit next to each other as long as one seat was empty on each side.

Film shoots would be allowed with up to 150 crew members and 50 onlookers.

Group exercises would be permitted at parks and sports fields as long as each participant had at least five square metres of space, with a maximum of 50 people per group.

Game arcades inside malls could reopen, while other gaming places would remain shuttered. Each player would be given a maximum of two hours.

Dr Taweesilp reiterated that all business and leisure activities allowed to resume would remain subject to disease control measures and the use of the Thaichana app for check-ins and check-outs.

Deputy army chief Gen Nathapol Nakpanit, who is also deputy chairman of the government's committee considering the relaxation of Covid-19 restrictions, said on Wednesday the committee planned to lift the 11pm-3am curfew for 15 days.

However, enforcement of the executive decree on public administration in emergency situations will continue.

"Without the curfew people can resume their normal lives, but the state of emergency will remain in place in case the government needs to take swift action to stop Covid-19 from spreading," he said.

Normal laws would not facilitate swift and effective responses to the disease, he said.

The responses include a 14-day quarantine for people arriving from other countries.

The emergency decree prevents airlines from suing the government for banning their flights, Gen Nathapol said.

He did not say when the curfew would be tentatively lifted. But he said that during the 15 days officials would evaluate public feedback.

Gatherings would not be prohibited, to show that imposition of the emergency decree had nothing to do with any political interests, Gen Nathapol said.

Gen Somsak Roongsita, secretary-general of the National Security Council and head of the committee, said that boxing stadiums might be allowed to reopen in the fourth stage of relaxation of business and other activities.

Asked by reporters if a ban on international flights into the country will be lifted in the 4th-stage relaxation, Gen Somsak said the ban will remain in effect until the end of this month. The government will then consider how to proceed, he said.

Deputy Prime Minister Wissanu Krea-ngam on Wednesday said opinions from experts should also be taken into account if restrictions imposed to curb the Covid-19, including the curfew, are to be lifted.

Mr Wissanu, who is the government's legal expert, said that if the state of emergency is lifted, there are still other laws that can revoked again to deal with the situation, such as the communicable diseases law, the air navigation act, and the disaster mitigation and prevention law.