How has Thailand kept the lid on Covid?
Thailand
Special Report

How has Thailand kept the lid on Covid?

Dr Tanarak Plipat, deputy director general of the Department of Disease Control (left) and Dr Taweesilp Visanuyothin, spokesman for the Centre for Covid-19 Situation Administration (centre) participate in a panel discussion at the Foreign Correspondents' Club of Thailand in Bangkok on June 9, 2020. (Photo: Jonathan Head)

It’s a mystery, although a very welcome one.

The novel coronavirus has infected more than seven million people around the globe, and killed more than 400,000 of them. Yet Thailand, which was the first country to record an infection outside China, has so far been relatively unscathed. No new cases were recorded on Thursday, leaving the accumulated total at 3,121 – 2,987 of whom have recovered. Just 58 deaths have been recorded since the outbreak began in January.

How has the kingdom escaped the horror that has gripped much of the world? On the evening of June 10, a panel of experts convened at the Foreign Correspondents’ Club of Thailand to discuss possible explanations. (Jump to video)

Craig Griffin, Thailand representative of ESCOMAR, a global market research association, began proceedings by debunking a conspiracy theory that has steadily lost traction over recent weeks – that cases of Covid-19 in Thailand are actually much higher than reported.

“If the epidemic was as serious as in European countries and the US, we’d be talking about thousands of deaths,” he pointed out. “I don’t think it’s credible to think that kind of cover-up is happening.”

Climate, customs and other variables?

Matthew Tostevin, Southeast Asia editor for Reuters, agreed. “In Jakarta, by the end of March we found 1000 more burials than usual, since records began. Coronavirus was the only clear explanation. … We did the same thing in Thailand and didn’t find a large number of unexplained deaths.”

Despite the higher numbers in Indonesia, Southeast Asia has seen such a tiny fraction of the infections and deaths logged in Europe, the US and now Latin America. Mr Tostevin said there was no clear explanation for this, but mentioned some of the theories being floated: warmer weather, racial differences, cultural preference for not shaking hands and hugging, the prevalence of mask-wearing and the effectiveness of government responses to the crisis.

Cooperation from the public?

Unsurprisingly, the two representatives of the Thai government on the panel had more definitive views.

Taweesilp Visanuyothin, spokesman for the Centre for Covid-19 Situation Administration and the public face of Thailand’s response to the crisis, said that controlling an epidemic required 90% cooperation from the population – and the Thai people had given it. “I ascribe our success to the spirit of cooperation of the public”, he said, adding that the messaging to the public had been clear and consistent. He did, however, concede mistakes had been made after moderator and veteran journalist Dominic Faulder pointed out that confusion had occasionally arisen, particularly regarding the lifting of the alcohol sales ban. 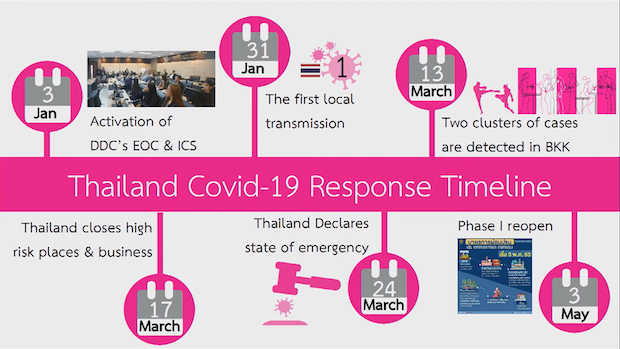 A timeline of Thailand's Covid-19 outbreak presented by Dr Tanarak Plipat at the Foreign Correspondents' Club of Thailand on June 9, 2020.

Tanarak Plipat, deputy director general of the Department of Disease Control, agreed with Dr Taweesilp that ordinary citizens deserved much of the credit, paying tribute to the “spirit of togetherness” of the Thai people in a crisis and recalling the dramatic cave rescue of 2018 as another example.

Dr Tanarak, however, was also keen to assert that the government and Thailand’s robust health security system were largely responsible for the kingdom’s success. In particular, he cited the willingness of politicians to let health experts call the shots; the coordination and cooperation between government departments as well as provincial and local bodies across the country; the clarity of communications to the public about how to avoid disease transmission and the “universal precaution” attitude -- assuming that you and everybody else has the disease until proven otherwise.

Finally, Dr Tanarak highlighted the work of more than 1000 epidemiological teams across the country, who he said had been able to investigate every single case, trace every contact and monitor them for 14 days.

James Wise, the former Australian ambassador to Thailand and author of Thailand: History, Politics and the Rule of Law, was particularly impressed with the 1 million-plus health volunteers who had earned their stripes during the HIV and MERS crises. Speaking via Skype, he said the predominantly female army of helpers showed that women should play a more prominent role throughout society -- including in government.

Looking to the future, disease control specialist Dr Tanarak said that if new case numbers stay low, Thailand would begin to create travel bubbles, opening up international travel with other low-risk countries. But the first foreigners allowed back in, he said, are likely to be business people based in the country. They will be subject to the same testing and quarantine requirements currently applied to repatriated Thais.

As the evening drew to a close, the panellists took questions from the audience – including one suggesting that restrictions on alcohol were overzealous, and wondering when they might be lifted.

Dr Taweesilp replied that alcohol abuse was a serious problem in Thailand, and many believe that in a majority Buddhist country, the fifth precept of avoiding intoxicating substances should be encouraged.

However, it appears that people wanting to celebrate Thailand’s success in combating the pandemic with a beer or a glass of red at a restaurant will not have long to wait.

Nation asks US to cut it from trade watch list

Thailand has asked the United States to remove the country from its trade watch list this year, a request made during bilateral talks on the sidelines of this year's Apec Ministers Responsible for Trade (MRT) meeting in Bangkok.

Weather forecasters are warning of sudden floods and runoff from heavy rain that is expected to continue in most parts of the country over the next three days.