The moon moves in front of the sun, as seen from the observatory of the National Astronomical Research Institute of Thailand in Plaeng Yao district of Chachoengsao on Sunday. (Photo by Varuth Hirunyatheb)

Skywatchers across the country had a chance to see a partial solar eclipse that passed over the kingdom, a phenomenon that will not reoccur for the next seven years.

About 300 enthusiasts gathered at the observatory in Plaeng Yao district of Chachoengsao, the closest facility to Bangkok, to witness the solar eclipse. Many others used telescopes or protective glasses to view it at other observatories or outdoor locations around the country.

The National Astronomical Research Institute of Thailand (Narit), which operates the observatories, said the moon started to obscure the sun in Thailand at 1.10pm, with peak coverage of 40% took place at 2.49pm. The partial eclipse ended at 4.09pm, and was best seen in the northern region, the agency said.

Thailand joined other countries around the world in viewing the event. Skygazers have to wait until Aug 2, 2027 for the next partial solar eclipse.

“I am so excited,” said Sasithorn Saengsophon, 82, who went to the observatory in Chachoengsao from Bang Khla district with her two sisters. “I was glad to have a chance to see it again at my age.”

Some people, including those in Bua Yai district of Nakhon Ratchasima, knocked on their houses with wooden sticks when they saw the moon start to block the sun's rays. The practice is believed to dispel bad energy from their households. 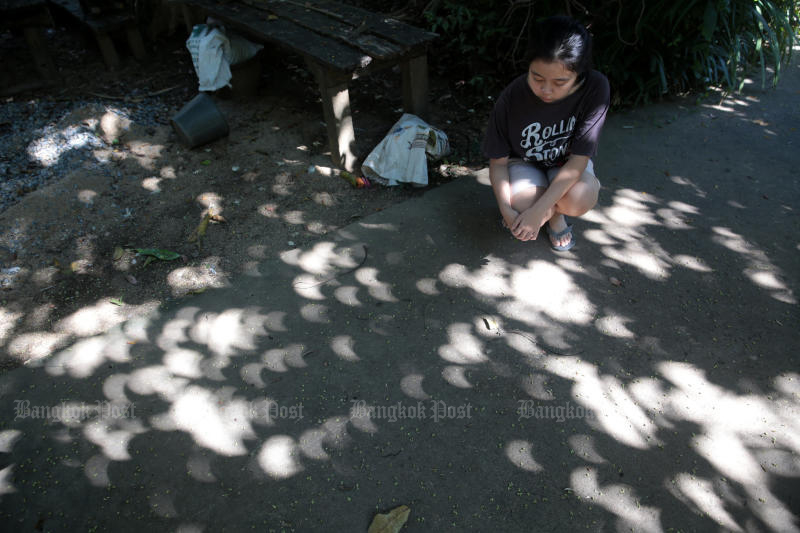 A girl watches the shadows of the partial solar eclipse reflected on the ground in Chiang Mai. (Photo by Chanat Katanyu)

Narong Yukrung, 52, took a break from his construction work in Muang district of Chai Nat to watch the event broadcast live on the Narit Facebook page on his mobile phone.

“I don’t know whether I will have a chance to see it again,” he said, thanking the agency for enabling him to watch the eclipse on his device, rather than don protective glasses.

The agency's Facebook Live stream drew 3 million viewers, along with 52,000 reactions and 36,000 comments. It also livestreamed the event on YouTube.