The Centre for Covid-19 Situation Administration on Monday gave the green light for all remaining entertainment facilities to reopen from Wednesday. All activities and businesses will be allowed to resume on Wednesday in the final phase of easing of the Covid-19 lockdown. (Photo: Wichan Charoenkiatpakul)

All night entertainment venues, including soapy massage parlours, will open their doors again on Wednesday as restrictions imposed to curb Covid-19 are further eased in the final phase.

The Centre for Covid-19 Situation Administration (CCSA) on Monday gave the green light for all remaining entertainment facilities to reopen from tomorrow. They include pubs and bars, karaoke bars, and bath-sauna-massage establishments. Health and physical distancing measures and monitoring will be required.

All premises that reopen will be required to use the "Thai Chana" platform, created to alert businesses and customers to any Covid-19 outbreak.

From tomorrow, shopping malls, department stores and community malls will be allowed to open until 10pm from the current 9pm.

Other premises allowed to reopen will include schools and educational institutes, while night entertainment venues, pubs, bars, karaoke joints, beer halls and beer gardens will be allowed to open until midnight, with the enforcement of social distancing rules. Customers must use the Thai Chana app to check in and out.

Gaming and internet cafes can reopen 24 hours for customers aged 18 and older. Younger patrons will be allowed in only at specified hours, he said.

Soapy massage parlours customers must use the Thai Chana app when checking in and out. Customers and staff must wear face masks all the time except when taking a bath, he said. 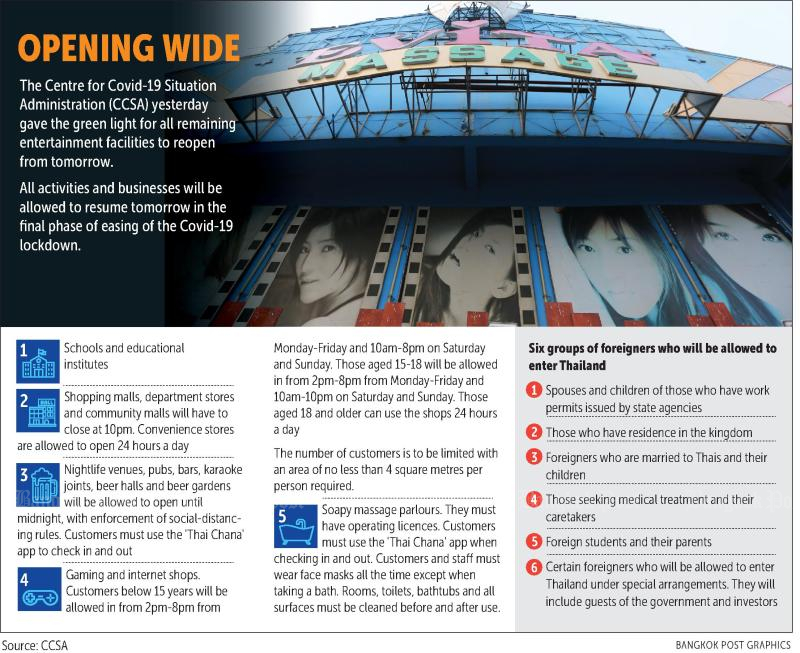 Dr Taweesilp said that the CCSA meeting stressed the need for massage parlours to strictly follow health measures while the meeting issued a stern warning against allowing the sex trade to take place in their premises.

If there are Covid-19 infections at their premises, the owners will face punishment, Dr Taweesilp said.

The decision to open up more businesses, and some travel, was made after more than a month without any new local infections being recorded in Thailand.

Restrictions were earlier lifted on restaurants, schools, malls and many sports activities -- with enforcement of social distancing and body temperature checks.

The meeting on Monday also agreed to extend the use of the emergency decree until the end of July after it was due to expire today. The proposed extension will be submitted for cabinet approval today, Dr Taweesilp said.

The extension was necessary because the country will open up more businesses and permit more travel, and all schools will be reopened tomorrow, he said.

Speaking after the meeting, Gen Prayut said that the emergency decree is being kept in force because it has played a key role in bringing the pandemic in the country under control.

The decree combines the power of more than 40 laws so it can deliver quick and efficient responses to the pandemic, the prime minister said while insisting that it was not a measure to silence critics.

According to the prime minister, the reason for allowing the remaining businesses which are in the highest-risk category to reopen is because the government wants to ease the plight of low-income earners who are struggling to make ends meet.

"It's important for Thailand to battle the pandemic and solve economic problems. I have to admit these cannot be fixed quickly. In considering any matters, I always pay heed to public health officials first.

"Some say I exercise my power alone, but I use the power for the sake of integration. I only lay down guidelines and principles and set goals for agencies to take the best course of action," Gen Prayut said.

The CCSA reported seven new coronavirus cases and no new deaths on Monday, taking the total number of infections in Thailand to 3,169 with 58 deaths since January.

All the new cases were Thai nationals in quarantine after recently returning from India and the US. There have been no local transmissions in the kingdom for 35 days.

Sukhum Kanchanapimai, permanent secretary of the Ministry of Public Health, said that the latest easing of restrictions may pose a risk of new surges in infections.

The Department of Medical Services found that hospitals in Bangkok have about 200 intensive care beds in both state and private hospitals, though there are more than 1,000 ICU beds nationwide.