The Centre for Covid-19 Situation Administration (CCSA) has been taking urgent measures after an Egyptian soldier confirmed to be infected with Covid-19 was found to have visited shopping malls in Rayong province.

Meanwhile, the family of a nine-year-old girl infected with Covid-19 is being investigated after its members were found to not be in embassy accommodation, having stayed in a condominium.

Deputy Public Health Minister Sathit Pitutecha will visit Rayong on Tuesay while a deputy director-general of the Department of Disease Control will visit a condominium in Bangkok.

The visitors from Egypt stayed in Rayong en route to a one-day trip to China, where they had military business, then returned to the province on their way home.

All were allowed to enter the country, says the CCSA, as they were defined as air crew under the conditions set by the Civil Aviation Authority of Thailand. They were not asked to quarantine because they were coming for less than 14 days but they were required to undergo virus tests.

The general manager of U-Tapao airport, Vice Adm Kitchpol Rienglekjamnong, said only one member of the group, a soldier, sneaked out to visit shopping centres.

Echoing many social media users who spread the hashtag #Covid19 (in Thai), the Drama-addict Facebook page, which has more than 2 million followers, urged authorities to reveal exactly which locations had been visited by the infected man.

The page said people had the right to know in order to protect themselves. The centre had at that stage only published the vaguest information, by identifying Rayong as the province visited.

Central on Monday announced it had checked and no Covid-19-infected patients visited the mall while the hotel said it had been informed by the Egyptian embassy that the group had passed Covid screening. 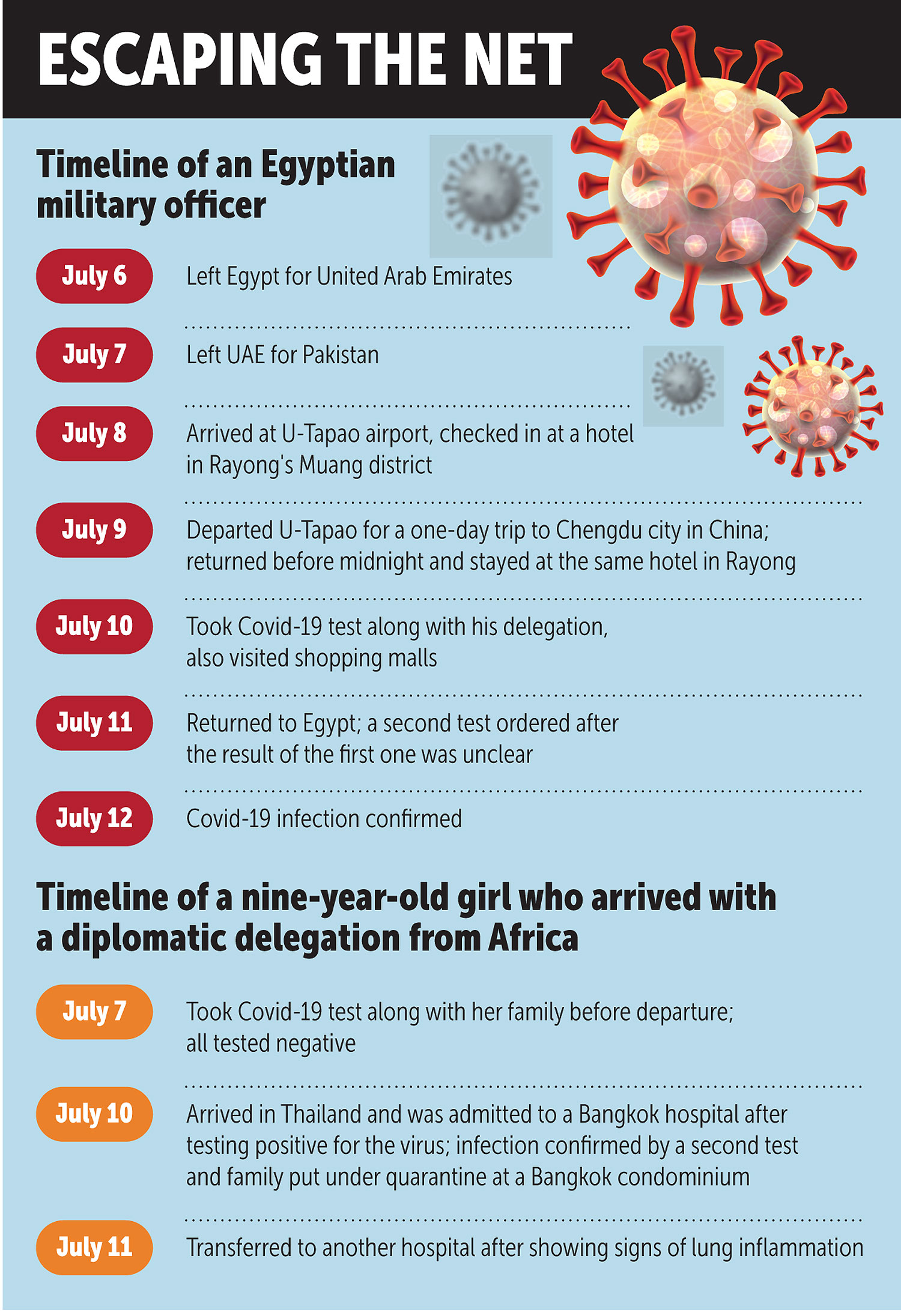 CCSA spokesman Taweesilp Visanuyothin said officials from Bangkok would join local staff in the province to check for coronavirus contagion at every place visited by members of the delegation, as well as everyone they came into contact with.

The health scare follows a positive result returned from the lab on Sunday after tests on a swab taken from the 43-year-old soldier. He was one of three new confirmed cases announced by the CCSA on Monday. The other two were Thais returning from working in Kuwait and Bahrain.

The soldier and 30 others, including crew of their aircraft, departed Egypt on July 6 and went to the United Arab Emirates. They then travelled to Pakistan the next day, Tuesday, and arrived at U-tapao airport in Rayong on Wednesday.

The UAE, Pakistan and Egypt are all hot spots for Covid-19 infections found in Thais returning home from overseas.

The information posted on the CCSA Facebook page said the group stayed at a hotel in the province.

The team left U-tapao for Chengdu, China, last Thursday and returned shortly before midnight the same day, staying at the same hotel.

Dr Taweesilp said health officials tested them on Friday and there were unconfirmed signs that the soldier might have caught the virus.

The group returned to Egypt on Saturday, the day before the lab confirmed the positive result.

The spokesman said the hotel where the soldier and other members of the delegation stayed was being cleaned. The group visited other places during their stay in the province, including a shopping centre, he said, but he would not name the locations.

"We will examine all the places they visited," said the CCSA spokesman.

Authorities would also improve the scanning at the airport in Rayong, which was not as strictly enforced as it was at Suvarnabhumi airport. "We will reconsider all practices," he said.

Officials from the Disease Control Department would be sent to conduct tests on everyone who visited the two premises, Mr Sathit said.

On Saturday, the CCSA also reported that a nine-year-old Thai girl who returned home from Sudan with her family had tested positive.

Dr Taweesilp said on Monday she had been hospitalised but the other four family members had not been quarantined because they were the family of a diplomat. They has reportedly self-isolated at a condominium in Bangkok, which the CCSA did not name.

The mother took everyone to get tested in Sudan last Tuesday before they left home, said Dr Taweesilp, and all tested negative.

Three days later, they were tested on arrival and the results were negative but more comprehensive tests showed the girl was infected.

Officials were continuing to investigate the case.