US Ambassador to Thailand, Michael George DeSombre, gestures toward a military painting — 'Washington and His Generals' — which shows General George Washington's farewell to his troops at Fraunces Tavern, New York City in 1783. (Photos: Somchai Poomlard)

Last week, US army chief of staff Gen James McConville visited Thailand to strengthen the 65-year-old military alliance, culminating in the signing of the Strategic Vision Statement. Early this month, China held a five-day naval drill near the contested Paracel Islands. Then the US carried out military exercises in the waterway showing support for the free and open Indo-Pacific, as the South China Sea has been subject to overlapping claims by many countries, including China.

It is not by chance that the new US ambassador to Thailand, who just took up his post in March, chose a series of military-related paintings for an exhibition at his residence.

In an interview with the Bangkok Post, US Ambassador Michael George DeSombre said the US had carried out its military engagement in support of freedom.

"That is what we have done in the Spanish-American War, World War I and World War II. That is the role we see our military provides in promoting freedom around the world and ensuring other countries have the ability to be sovereign, safe and secure, which is the foundation of our Indo-Pacific strategy," he said.

The ambassador said the US is now focusing attention on the South China Sea to make sure that Beijing does not illegally extend its control over the waterway.

"That is an important area for Thailand because Thailand, although not a claimant in the South China Sea, depends upon the freedom of navigation for exports of about 80% of your GDP, so export and import flows through a naval situation that is not free and open would be problematic," he said.

He voiced support for Asean's position on the South China Sea in the 36th Asean Summit on June 26 and stressed that it comply with the United Nations Convention on the Law of the Sea (Unclos).

From the US to Thailand

Ambassador DeSombre is the first political appointee to the US ambassador's post in Thailand in almost 50 years. Formerly a lawyer in business negotiations, he told the Bangkok Post in March his focus in Thailand would be promoting the economic relationship.

However, he said military history has been his passion since an early age. Before he went to law school, he studied economics and pursued a master's degree in East Asia, which covered Chinese military history.

"I have never been in the military. Sometimes, I wish I had gone," he said.

He is a member of the Army and Navy Club in Washington DC. He reached out to them and asked if they would loan the US Embassy in Bangkok some art. An exhibition programme is now running at the century-old US Ambassador's residence on Witthayu Road in Bangkok until the end of this year.

"I gave them a list and they gave me almost everything I wanted except a painting of President Ulysses S Grant. I hoped to have that painting because he was the very first president to visit Thailand in 1879," he said.

However, Ambassador DeSombre said he could borrow the eponymous replica of the original portrait of George Washington, who went down in American history as the founding father of the US.

"Obviously, he was a great general who led to the victory of the revolution, but the most significant thing is that he gave it all up. … [However,] they called him back later to become the president [in 1789]. It is a good example of the transition of power, not just from one president to the next, but even from one military to civilian," he said.

Ambassador DeSombre said the painting titled Washington and His Generals, which recreated his farewell moment, has a very personal connection because it occurred at Fraunces Tavern in New York City.

"It is like the British way of saying Frank's Bar. It is an old eating club which is right across the street from where I worked. The first lunch I went for with a senior lawyer at my law firm was at Fraunces Tavern. It is still there. It is an old colonial building oozing history," he said.

Next to the portrait of the first US president is the oil canvas of Commodore Stephen Decatur, the first post-revolutionary war hero in the early 1800s. The ambassador said he is renowned for conquering the Barbary Pirates in the Mediterranean Sea.

However, he said the power of the US navy became evident in the Spanish-American War in 1898, as reflected in the painting titled the Battle of Santiago de Cuba, which was a victory for the US and led to the independence of Cuba from Spain.

Meanwhile, the diplomat said American air power later rose to prominence, especially the use of B-29 flying fortresses to attack the Japanese in Thailand in World War II.

"That was another important period in our US-Thai cooperation. The original work between the Office of Strategic Services that became the Central Intelligence Agency (CIA) and the Free Thai Movement was cooperating to take action against the Japanese," he said.

When asked his view on the future role of the military, Ambassador DeSombre said nobody wants conflict, but we are in a period of great power competition.

However, there are other aspects of cooperation. For example, the Armed Forces Research Institute of Medical Sciences, the joint US-Thai infectious disease centre, is conducting vaccine research and developing coronavirus testing given the current pandemic. 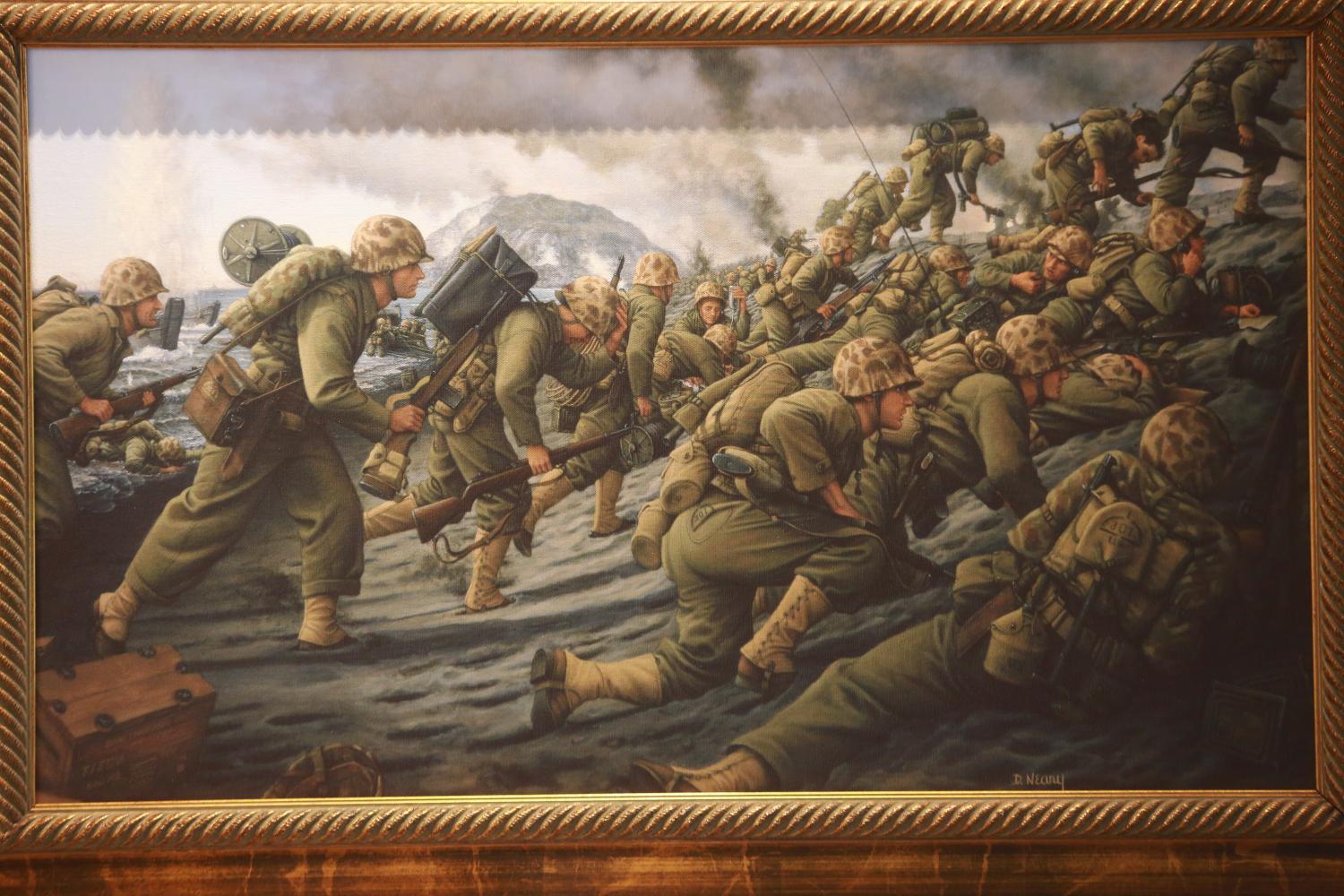 The painting titled '4th Marine Division Landing on Iwo Jima', right, shows a major 1945 battle in which US marines seized the island of Iwo Jima from the Japanese army.