'Lack of warning' over Egyptian group

People queue to be tested for Covid-19 at Passione Shopping Destination mall in Rayong province on Tuesday. (Photo: Wichan Charoenkiatpakul)

Villagers and businesses in Rayong are enraged by the government's failure to warn them about the movements of a coronavirus-infected soldier from Egypt who broke self-quarantine rules to go to a mall during a stopover in Thailand.

"We have been cooperating with the government's measures on Covid-19 all along. All we need from them is a timely warning about Covid-19 risks. Is that too much to ask?" said Nalinee Paipimai, a 29-year-old woman on her way to take a Covid-19 swab test on Tuesday.

Ms Nalinee was accompanied by her 11-year-old son. They were among more than 400 people who visited the Passione Shopping Destination on Saturday, the same day that a group of Egyptians was in the mall, one of whom later tested positive for the disease.

Like many other unlucky people who went to the mall that day, Ms Nalinee now needs to go into a 14-day self-quarantine and that means she won't be able to earn the overtime money she had expected.

Her son no longer has to go to school as 127 schools across the province were on Tuesday ordered to close to contain the risk of the infection spreading.

The Ministry of Public Health on Tuesday sent three Biosafety Mobile Units to provide Covid-19 nasal swab tests. These mobile units will be parked for 14 days directly in front of the Passione Shopping Destination, a shopping mall in the centre of Rayong province to allow local people to get tested.

Ms Nalinee was among 394 people summoned by the Ministry of Public Health to be immediately tested on Tuesday because she had been using Thai Chana, a location tracking app developed by the government to monitor the spread of the virus.

On Tuesday, hundreds of people queued up for nasal swab tests. Most of them looked more angry than fearful of catching the disease. Among the angry locals was Jeerapong Wongsrikeaw, a 42-year-old factory worker who went to get tested with his mother and daughter.

"The government has been hiding information from us. This case proves that our government might not be able to handle Covid-19," he told the Bangkok Post.

Mr Jeerapong said local people feared the Egyptian soldiers might have roamed around freely at night. "We need the government to reveal their itineraries," he said. "The more we know the better we can protect ourselves."

Rayong province has been damaged by the report of an infected Egyptian who broke quarantine instructions to stay in his hotel and sneaked out to visit the mall last week. 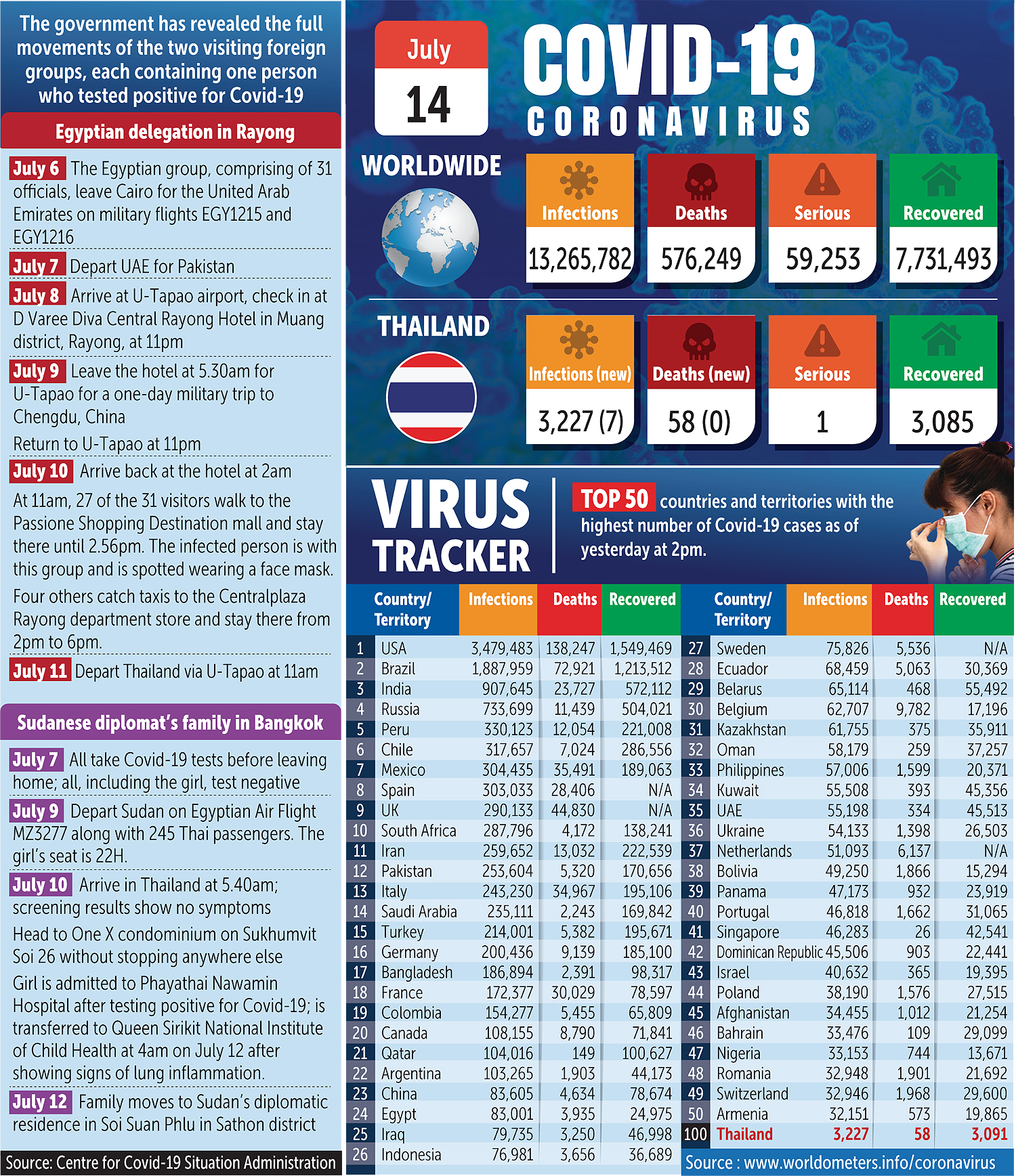 All 127 schools in the province were ordered to close on Monday and staff at the D Varee Diva Central Hotel, where the team of 31 officials stayed, as well as those who visited the shopping mall have all been ordered to go into a 14-day quarantine.

The ramifications of the incident were immediate as hotels found tourists cancelling trips planned for the upcoming long weekends. People retreated into lockdown mode.

A vendor at the the Passione Shopping Destination told the Bangkok Post that the latest Covid-19 case had come at the worst possible time.

"The situation was just starting to get better. People had started spending again and tourists were coming back. But now, the shopping mall is closed again," said the woman, who asked not to be named.

Deputy Public Health Minister Sathit Pitutecha on Tuesday led a team of officials on a fact-finding mission to the province.

Initial inquiries showed 27 out of the 31 Egyptian officials had visited the mall, one of them being the soldier who later tested positive for Covid-19.

The Public Health Ministry found four other officials also went to the Central department store while the ministry said 1,000 people were in the mall at the same time. Meanwhile, taxi drivers and staff at all the places visited by the Egyptian delegation have been tested and ordered into 14-day quarantine.

The ministry stresses these officials did not go out at night and spent most of their time in their rooms on the second floor of the D Varee Diva Central Rayong Hotel,where they stayed. Inquiries also indicate the infected soldier wore a face mask while in the hotel and did not speak with anyone but his friends.

These officials did not agree to being tested, however, and officials had to ask the Egyptian embassy to cooperate to get the job done.

There were 40 more Covid-19 fatalities and 2,331 new cases reported over the past 24 hours, the Public Health Ministry reported on Wednesday morning.