The government is pinning its hopes on two major projects to achieve its goal of becoming a digital hub in Asean.

A Low Earth Orbit (LEO) satellite business is being funded through an amendment to the Space Affairs Act and the country is expanding its submarine cable capacity to make it more efficient for Thais to access digital infrastructure at an affordable price, says Digital Economy and Society (DES) Minister Buddhipongse Punnakanta.

He told the Bangkok Post's "5G: The Game Changer" forum on Thursday that LEO satellites operate between 500- 2,000 kilometres above the Earth's surface compared to the 36,000km height of so-called geostationary satellites, the traditional types of communications satellites.

"The advantage of the lower orbit is lower latency. It will benefit everyone with access to high-speed internet services via 5G technology, IoT [Internet of Things] devices, M2M [Machine to Machine] technology," he said. 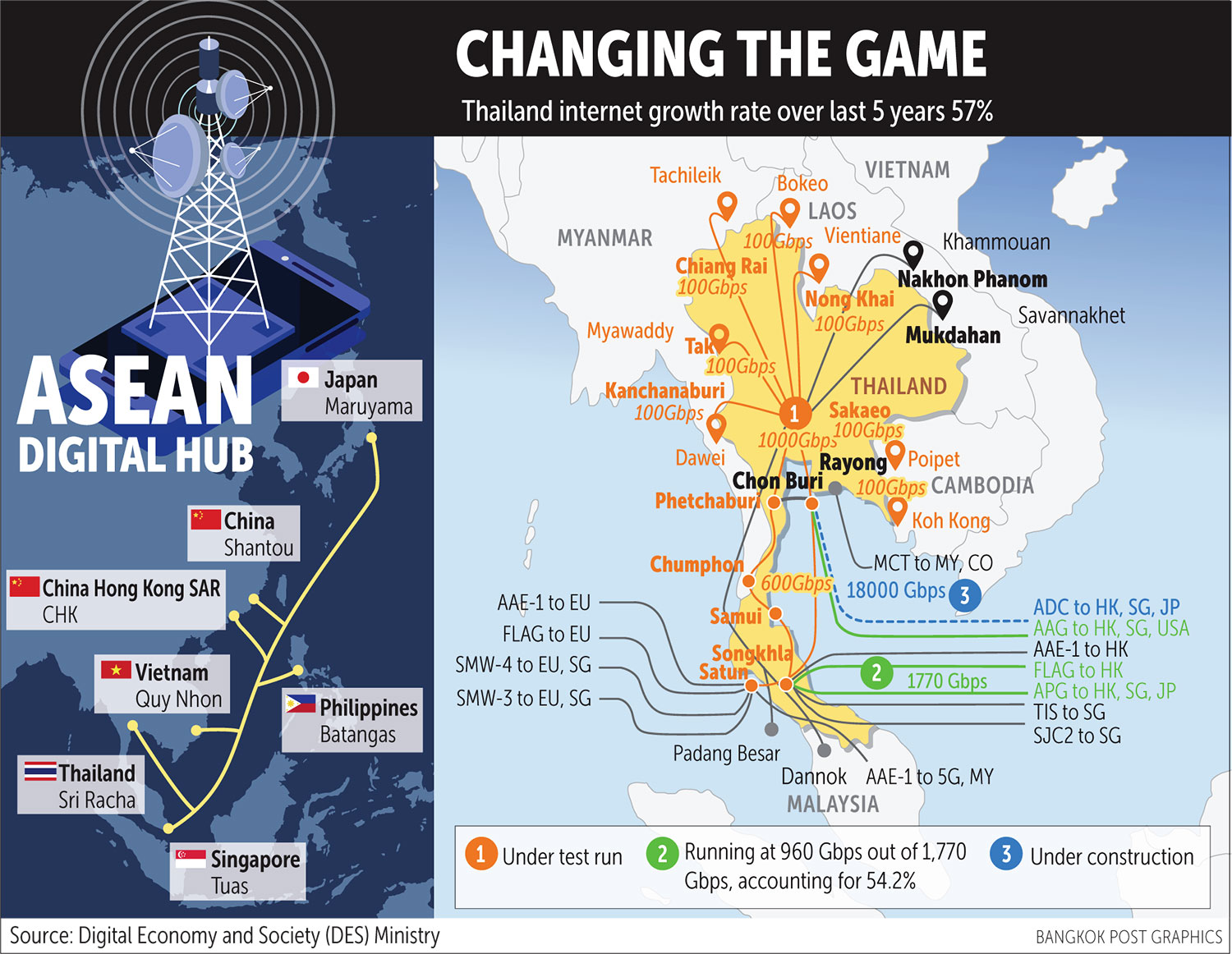 Other advantages include drone technology and applications in areas that require high levels of accuracy, such as remote surgery, and LEO satellite systems are ideal to power these applications due to their low latency.

Mr Buddhi­pongse said the government had added some key details to the Space Affairs Act, concerning licensing and business structure, enhancing its definition of space affairs infrastructure as well as types of satellite business categories.

Mr Buddhipongse said the government was, through CAT Telecom, developing Thailand to be the digital hub of Asean by expanding the capacity of submarine cables and creating new ones via a consortium agreement signed in February.

The new submarine cable under the consortium is expected to be completed in the next two years.

Mr Buddhipongse said 5G tech was becoming a major blood vessel in the digital infrastructure for Thailand's recovery as well as reshaping the country to lead the Asean region through a collaboration of public and private sectors.

"During the Covid-19 pandemic, Thailand has efficiently handled the outbreak thanks to critical infrastructure of the 5G network installation following the 5G licence auction in February," he said.

Mr Buddhipongse said the "new normal" had affected both society and the economy, driven by tech-driven factors and proactive healthcare measures.

More importantly, the new situation was already pushing public healthcare to be a major factor for attracting overseas investment.

These would make it easier for people to access healthcare services and related personal health data by using only a smart ID card.

The government realised the necessity for 5G tech innovation and Huawei Technology had helped by providing Covid-19 diagnosis services at Siriraj and Ramathibodi hospitals with 96% accuracy. "Reshaping the economy requires partnership from the public and private sectors," he said.