Donations pour in for jobless man in Pattaya
Thailand
General

Donations pour in for jobless man in Pattaya

Sarawut Wongthee lost his job at a Pattaya pub and was down to his last five baht when news of his plight began to spread, turning his life around. (Photo by Chaiyot Pupattanapong)

PATTAYA: Donations and public sympathy have poured in for a Si Sa Ket man who was down to his last five baht after losing his job in Pattaya because of the coronavirus outbreak.

Mr Sarawut on Saturday thanked all the people who had helped him overcome the hardship he was facing, including the local reporters whose stories caught the public’s attention. He said the cash donations — 89,281 baht as of Saturday — were very high and he did not want to accept any more. There were other people suffering hardship during the coronavirus outbreak and they needed help, he added.

“This amount is enough for me and I don’t want to receive any more. However, people keep transferring money to me. There are other people who are still facing tough lives. Foundations and hospitals are also affected by the coronavirus outbreak,” he said.

Mr Sarawut spent some of the donations to rent a room, sent some money to his family in Si Sa Ket, and gave some to alleviate the hardship of friends who were made jobless during the lockdown.

He also set aside 10,000 baht for needy people to get food at a stall in Pattaya that offered dishes at 20 baht each, and another 9,000 baht for the Baan Khu Ja child welfare foundation.

He is now looking forward to going to work in Rayong as Thai International Labour Co has given him a job at its factory.

Mr Sarawut earlier worked at a pub on the Pattaya Walking Street in South Pattaya. After entertainment venues were closed to prevent the spread of the virus, he and many others became jobless. He later earned a living by renting mats to visitors at Pattaya beach to make ends meet.

But when Pattaya closed all its beaches as part of its coronavirus containment drive, that job also disappeared. Mr Sarawut spent weeks looking in vain for work in the resort town and took shelter in a deserted bar when his money ran out. He had been left with only five baht and had to beg for food from people when a reporter learned of his plight. 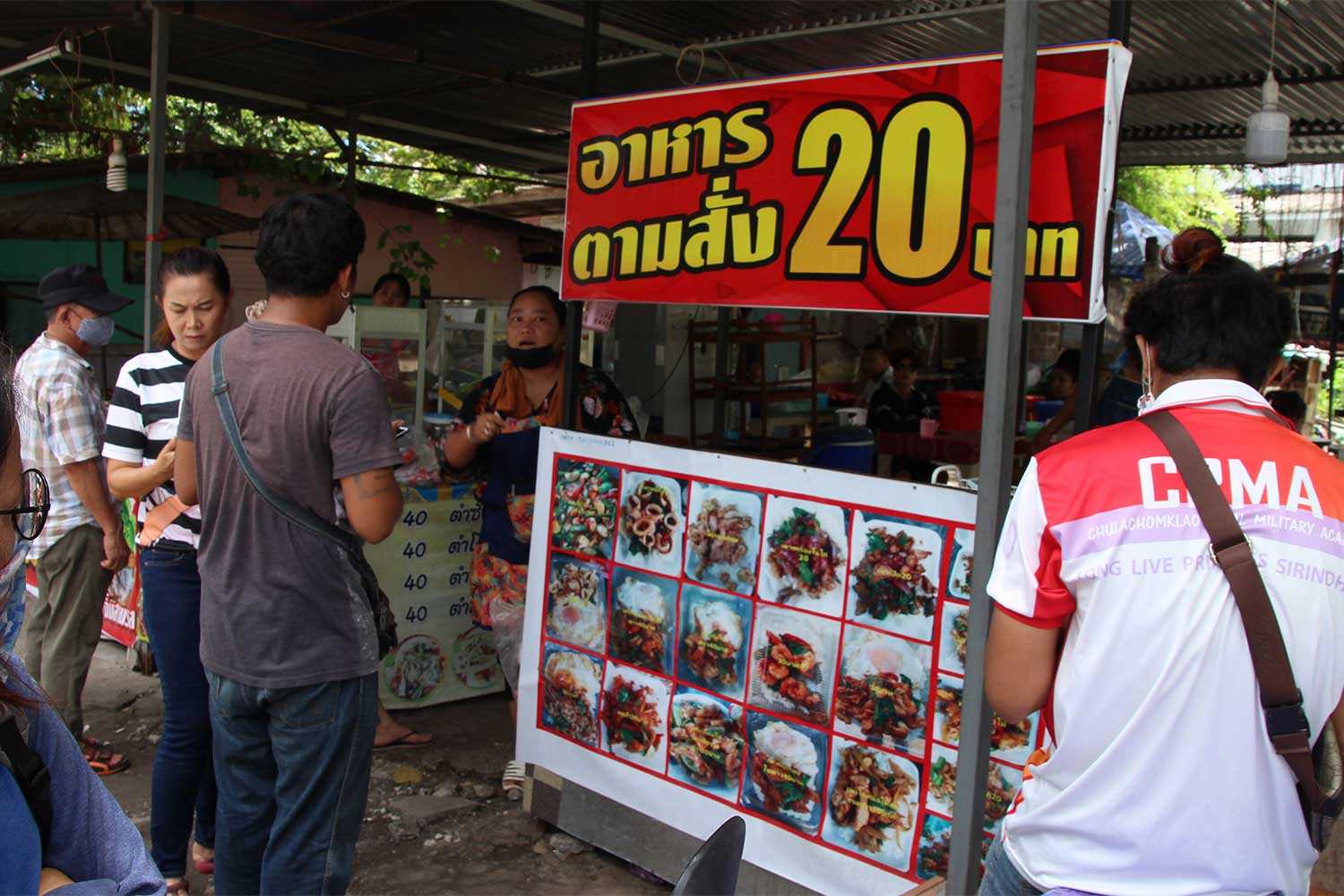 Sarawut Wongthee (in grey T-shirt) talks to a food vendor in Pattaya. He has set aside 10,000 baht of the donated money he received to provide free food to people in need. (Photo by Chaiyot Pupattanapong)