Robbers steal money, and a kiss

The 21-year-old accused robber, wearing a full-face crash helmet, is taken for a crime re-enactment at a 7-Eleven store in Tha Maka district, Kanchanaburi, on Friday following his arrest on Thursday night. The suspect and a 17-year-old accomplice are charged with holding up the store and taking a young woman employee hostage in the early hours of Thursday. (Photo by Piyarach Chongcharoen)

KANCHANABURI: Two young men robbed a 7-Eleven store in Tha Maka district, with one of them forcing himself on a young employee, kissing and forcing her to accompany them as they fled, early on Thursday morning.

The woman hostage was later released, terrified but apparently unharmed.

The two robbers arrived on a motorcycle about 3am. After they entered the store one of them produced a knife. They demanded the counter staff hand over the money in the till.

One of the robbers then pulled down a female employee's face mask and forcibly kissed her on the mouth, before making her leave with them as they fled with more than 10,000 baht.

The robbers abandoned the woman in a grove of trees about 5  kilometres away.

Police said she did not appear to have been injured, but she was very upset. The young woman was taken to hospital for an examination, Thai media reported.

Police arrested Anont Mangnoi, 21, at his house in tambon Tha Mai of Tha Maka district around 4pm on Thursday.

During a search of the house, they found two plastic bags, one containing 5 baht coins and the other 10 baht coins, and two bottles of alcohol also stolen from the convenience store  A motorcycle and a knife used in the robbery were also found in the grounds of the house.

About 9pm on Thursday, the parents of a 17-year-old youth took him to surrender to police. The teenager allegedly admitted to having colluded with Mr Anont  in carrying out the robbery.

The woman employee taken hostage was aged about 28 years and had been working at the store for only a month. 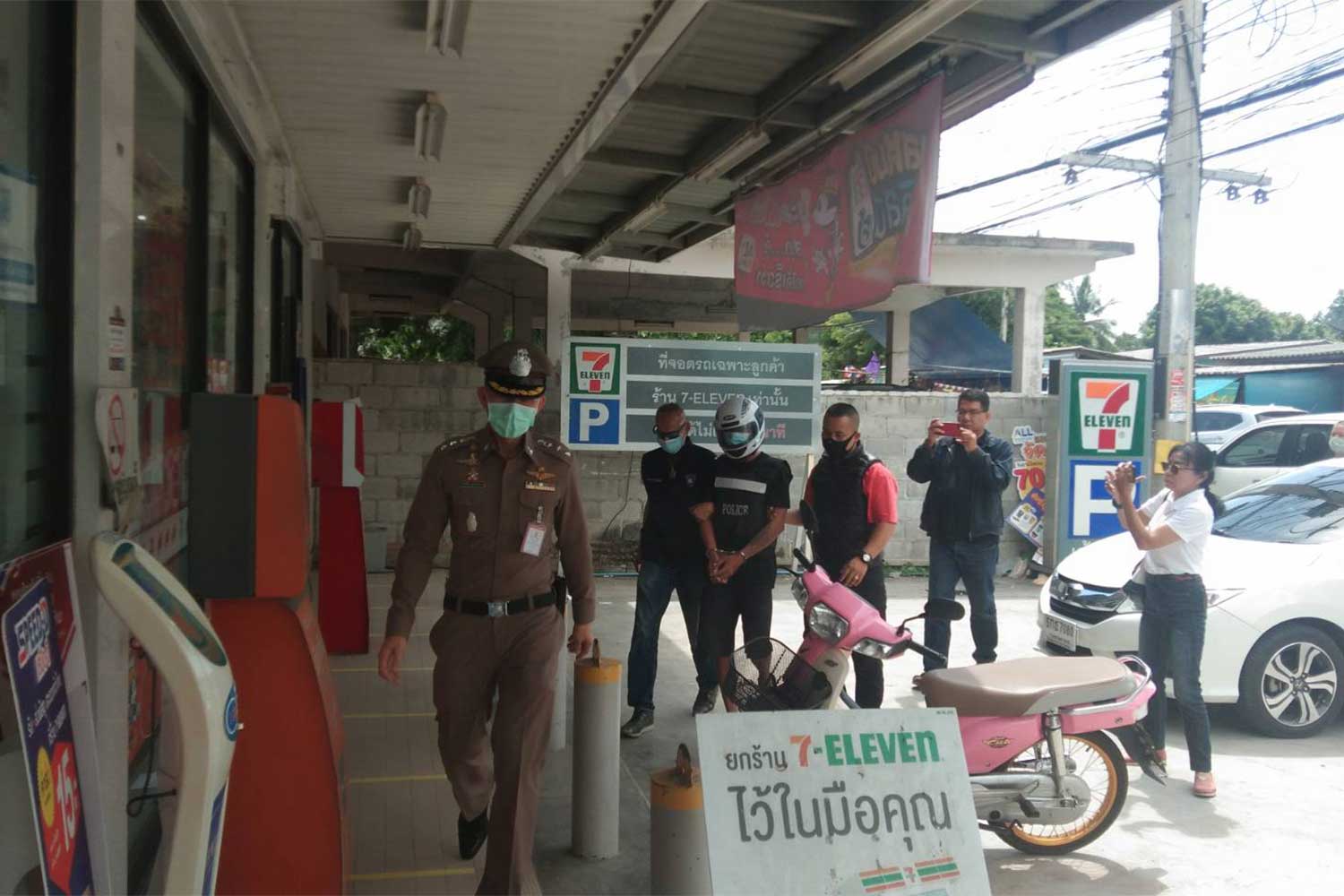 Police take Anont Mangnoi, 21, to the 7-Eleven store he allegedly robbed in Tha Maka district, Kanchanaburi, for a crime re-enactment on Friday. (Photo by Piyarach Chongcharoen)