Apirat tells students to tone it down
Thailand
Politics

Apirat tells students to tone it down

Kasetsart University students shine lights from their mobile phones during a rally at the university's Bang Khen campus. Their demands include charter changes, dissolution of the House and an end to violations of people's rights and freedoms. (Photo by Pattarapong Chatpattarasill)

Army chief Gen Apirat Kongsompong has warned anti-government protesters not to disrespect the royal institution while denying speculation that some politicians are behind the protests.

Gen Apirat said he was well aware of people's rights and freedoms in a democratic system but the protesters' actions were making people feel uncomfortable.

The army's top general said the current protest seemed like it may be part of a conspiracy but he refused to speculate who might be pulling the strings.

When asked if there was an effort to revive the 1932 revolution, the army chief said he was not concerned about this issue and the police would take care of it.

Gen Apirat added he did not think there would be a repeat of the bloody outcome that followed major protests by university students on Oct 6, 1976. 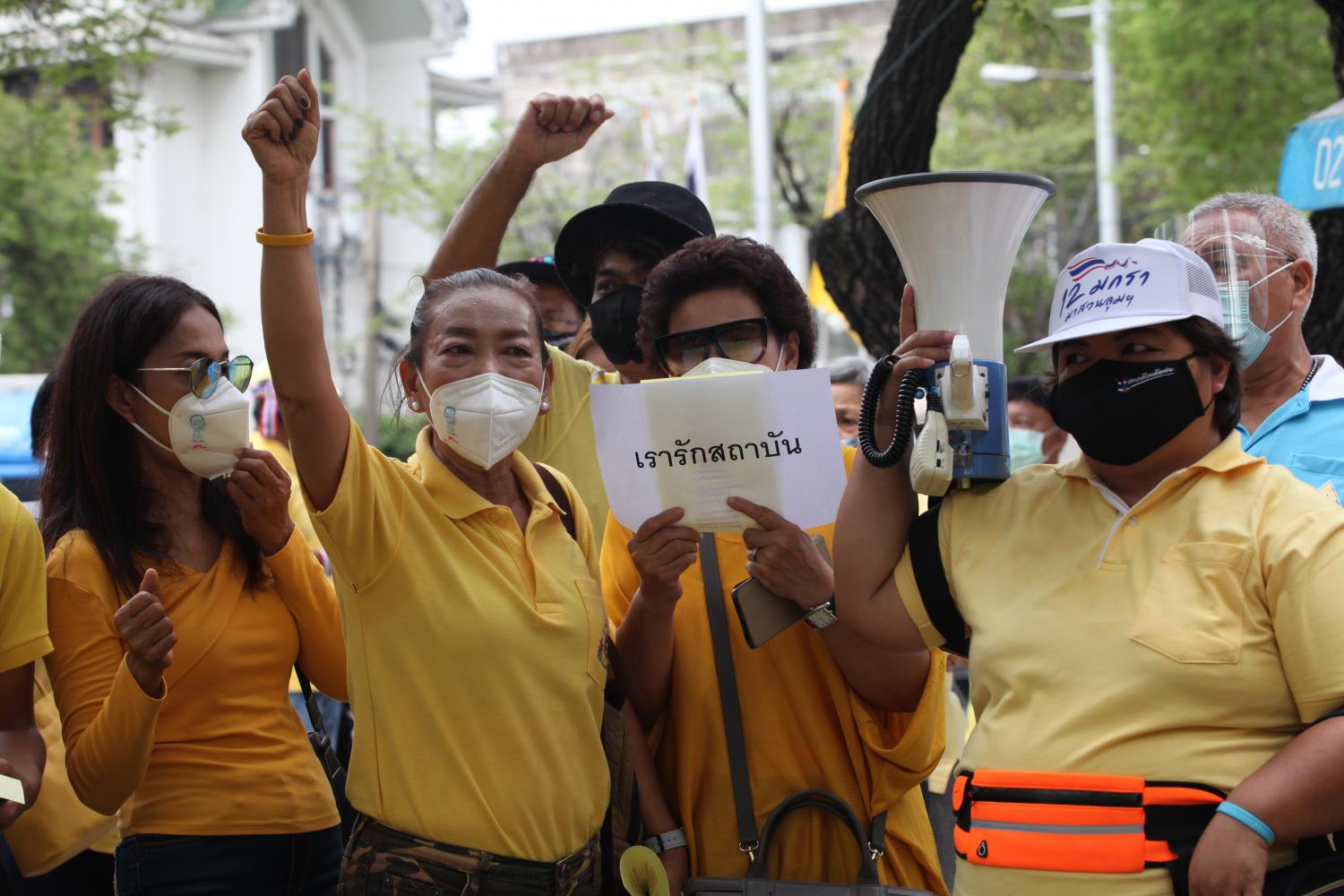 Royalists shows a sign reading 'We love the monarchy' as they head to the Royal Thai Army headquarters yesterday. The group submitted a petition to army chief Apirat Kongsompong asking him to look into disrespectful behaviour by anti-government protesters to the monarchy. Apichart Jinakul

In Chiang Mai, Prime Minister Prayut Chan-o-cha spoke with the press about the protest during his visit to the Bua Tong Waterfalls National Park. He said university students are the country's future and stressed that the three core institutions of Thailand are the nation, religion and the monarchy.

The PM also urged people of different generations to cooperate to create something new, saying that it was impossible to dismantle everything.

Around 300 police officers from many stations were sent to provide security at the protest site.

The protesters burned images of the PM and his deputy Prawit Wongsuwon before travelling to the government's complaint handling centre to air their grievances with the authorities.

The protesters said mismanagement by Gen Prayut, in his capacity as prime minister and defence minister, was the reason for the economic downturn.

They also accused the PM of mishandling the Covid-19 pandemic and demanded that he resign immediately and dissolve parliament to pave the way for a swift general election.

Meanwhile, Thai-Indian businessman Sathit Segal and a group of pro-monarchy supporters travelled to the Royal Thai Army Headquarters to submit a letter to the army chief, asking him to look into the anti-government protesters' disrespectful behaviour towards the monarchy.

Mr Sathit said he was concerned about the movement against the monarchy. The protesters had the right to freedom of expression but they must not offend the country's highest institution, he said.