The House committee on law and justice hears evidence from the Royal Thai Police and the Office of the Attorney-General following the prosecutors' decision to drop all charges against the Red Bull scion Vorayuth 'Boss' Yoovidhya in a 2012 hit-and-run case. The committee is chaired by MP Sira Jenjaka, right. (Photo by Pornprom Satrabhaya)

Prime Minister Prayut Chan-o-cha has finished setting up an independent committee to examine the 2012 hit-and-run case involving Red Bull scion Vorayuth "Boss" Yoovidhya, against whom all charges have been dropped without going to trial.

The prime minister said on Wednesday that he had ordered the committee be set up because the case was of intense interest to the public.

"So the government as the administrative body must make it clear by finding facts and problems in the case,'' he told reporters at Government House.

Society deserved to know all the facts, the legal aspects and everyone involved in the case, to ensure transparency. The committee could also propose reforms to the justice system, Gen Prayut said.

The prosecutors' decision not to arraign Mr Vorayuth on a charge of reckless driving causing death has drawn widespread criticism and affected people's faith in organisations, officials and the justice system. 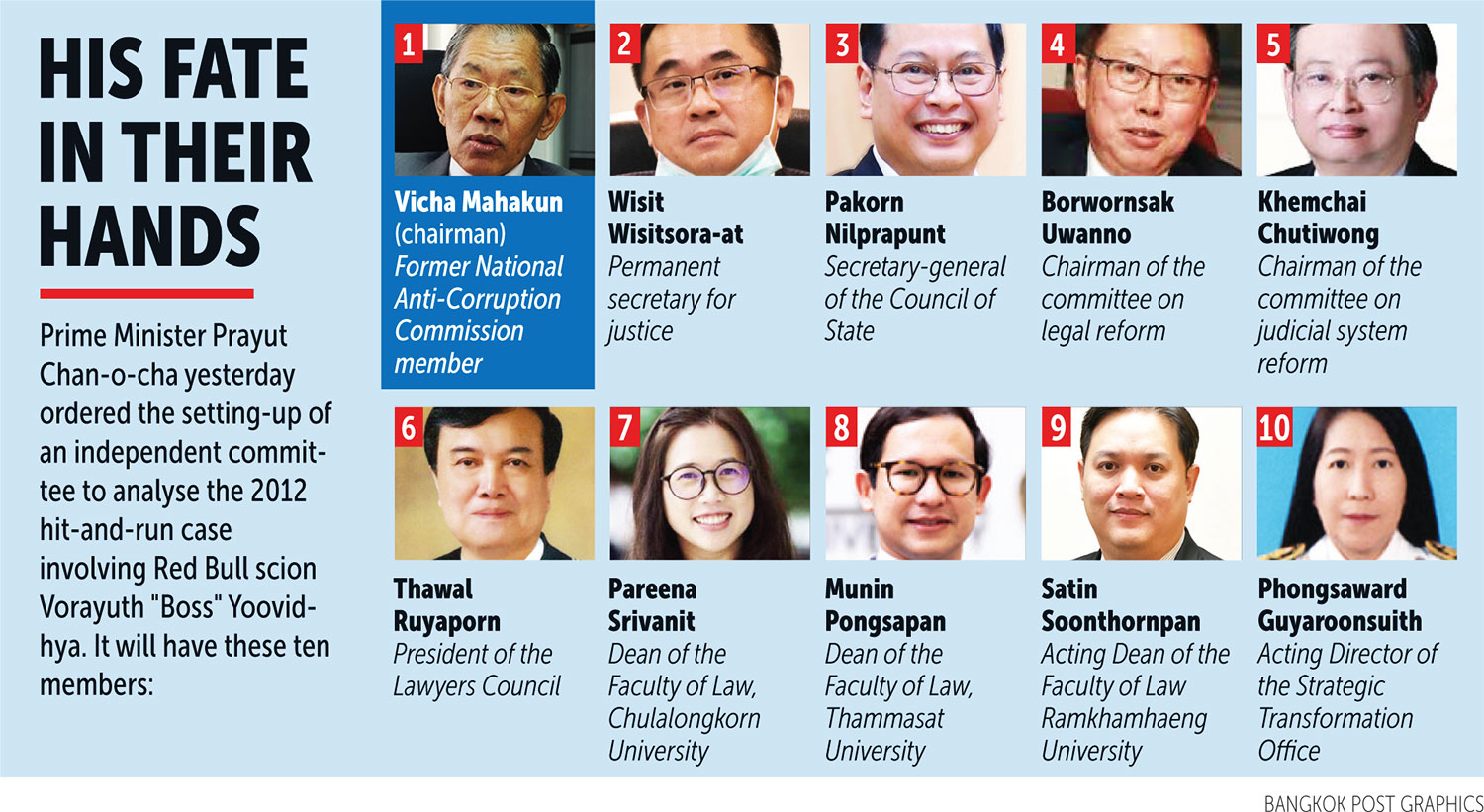 The panel will be able to seek information from various officials. It can also listen to opinions, recommendations and complaints from people but it can't intervene in the authority of officials responsible for the hit-and-run case. The committee is required to report its findings to Gen Prayut within 30 days, according to the PM's order.

Because this case had attracted a great deal of public attention since it occurred in 2012, the decision to drop the final and most serious charge against the suspect even before it reached court has sparked public outrage, the order said.

"This is a sensitive issue that may shatter public confidence in the judicial organisations, justice officials and even the entire judicial system," the PM's order declared.

The panel's findings could benefit both the law enforcement and judicial systems in terms of improving their efficiency and fairness, read the order, and could become a case study in the pursuit of urgent reform.

Mr Vicha admitted he was under a great deal of pressure to lead this committee. He was determined to find out not only the facts but also the "truth" behind the decision to drop the prosecution against Mr Vorayuth. "I'm duty-bound to also figure out mistakes in the case and report them to the prime minister,'' he said.

Meanwhile, the House committee on judicial procedure and human rights on Wednesday invited officials for questioning regarding the hit-and-run case.

Pol Gen Chanasit Watthanawarangkun, a police inspector who represented the Royal Thai Police (RTP), asked the committee to wait until findings are published by three fact-finding panels, from the Office of the Attorney-General (OAG), the RTP and the Prime Minister's Office.

Pol Maj Gen Chumphon Phumphuang, chief of Samut Prakan police and a former head of Thong Lor police, which investigated the case, meanwhile insisted a medical report containing results of a test on Mr Vorayuth was in the investigation file that had been submitted to prosecutors. However, he said most investigators believed the suspect should not be indicted on drug charges.

Three activists claimed previously they had evidence to prove that Mr Vorayuth had illicit chemical substances, including cocaine, in his system on Sept 3, 2012, the day of the fatal accident. They cited a copy of a letter by Vichan Peonim, head of the Forensic Pathology programme at Mahidol University's Faculty of Medicine at Ramathibodi Hospital, made to the head of the faculty's Department of Pathology.

Prayuth Petchkhun, deputy spokesman of the OAG, said the office next week would give a full public explanation about its handling of the case. Both Pol Gen Satawat Hiranburana, a special adviser to the RTP, and Pol Lt Gen Charuwat Waisaya, an assistant national police chief, insisted the case was now over, since the prosecution decided not to to indict the suspect on the final charge.