Cops back on Boss' trail

Police plan to use medical information that the chemical substances found in the blood of Red Bull scion Vorayuth "Boss" Yoovidhya could be a result of the use of cocaine to see if they can press a charge of drug use against him.

The dentist who provided dental treatment for Red Bull scion Vorayuth "Boss" Yoovidhya has meanwhile denied using cocaine in his dentistry after police said there might be a misunderstanding regarding police testimony over the use of the drug.

Pol Gen Satawat Hiranburana, a special adviser to the Royal Thai Police, who heads a police committee assigned to investigate why police and prosecutors decided to drop all charges against Mr Vorayuth in the hit-and-run case, said on Friday that officers handling the case received Mr Vorayuth's blood test results on Oct 11, 2012.

Two of the substances were from sleeping pills and coffee while and the others were caused by the digestion of cocaine and alcohol, he said. 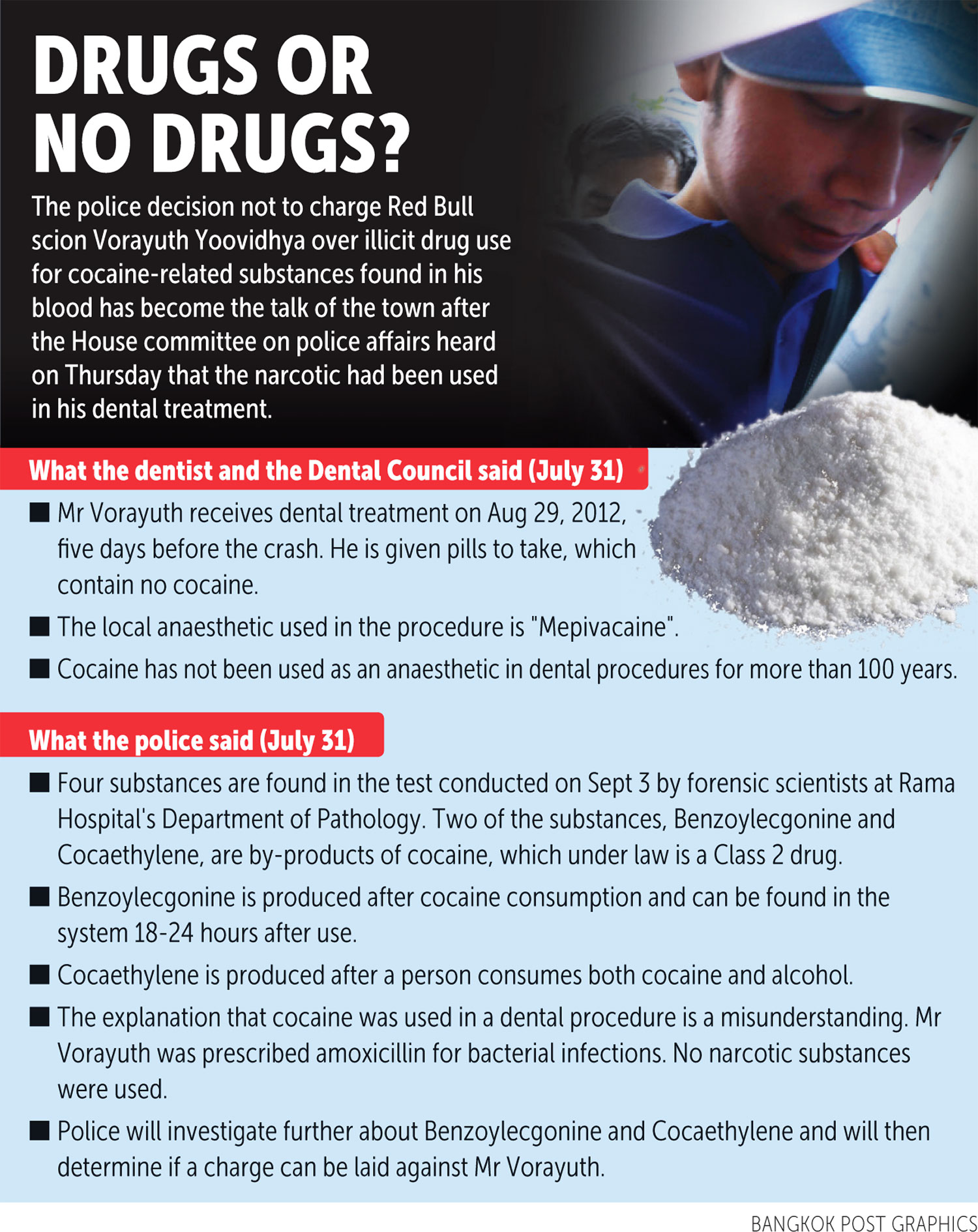 At the time, police summoned the dentist for questioning. The dentist, whose identity was withheld, confirmed that he administered medication without narcotics to Mr Vorayuth, Pol Gen Satawat said.

Investigators then sought clarification from doctors at the two institutes as to whether the test results might be caused by antibiotics or were actually the result of narcotics, he said.

Regarding the police's testimony before the House committee, Pol Gen Satawat said he believed it might be a misunderstanding.

The next step will be to ask medical experts at the Public Health Ministry to determine the source of the two substances, he said. If it is found that they are narcotics, he will ask the national police chief to take action, Pol Gen Satawat said.

Padate Tangngamsakul, the vice-president of the Dental Council, insisted on Friday that cocaine is not used by dental professionals as it is a narcotic.

Dr Padate said that the dentist, who asked not to be named, told the Dental Council that he gave dental treatment for Mr Vorayuth on Aug 29, 2012 -- five days before the hit-and-run incident which took place on Sept 3.

The treatment was for a gum condition which required the injection of an anaesthetic called Mepivacaine which is in the same group as lidocaine. After the procedure, the dentist only prescribed the antibiotic amoxicillin, Dr Padate said.

"The dentist in question has insisted that he told police several years ago that no cocaine was used in the dental treatment of Boss," Dr Padate said, adding that the dentist wondered why police officers reportedly said he used cocaine.

Asked whether the Dental Council will invite the dentist to give information, Dr Padate said the dentist needs time to prepare because the incident took place almost eight years ago.

Piyada Prasertsom, director of the dental health bureau of the Department of Health under the Public Health Ministry, said on Friday that cocaine had not been used in dentistry for more than a century.

On Thursday, Natchanon Srikokuea, spokesman of the House committee on police affairs, told a press briefing the panel had questioned officers who handled the case as to why they did not press charges related to illicit drug use against Mr Vorayuth despite a positive blood test proving the use of narcotics.

The officers told the committee they did not press the charge because a dentist confirmed he had administered medicines which had cocaine as a component for dental treatment. When Mr Vorayuth drank alcohol, it mixed with the medicines which caused some chemical substances in the body to be released, Mr Natchanon quoted the police as saying.

However, the police had no medical documents to prove that chemical substances found in Mr Vorayuth's body were the result of dental treatment, Mr Natchanon said, adding it was just a verbal explanation.

Three activists claimed previously they had evidence to prove that Mr Vorayuth had illicit chemical substances, including cocaine, in his system on Sept 3, 2012, the day of the fatal accident.

They cited a copy of a letter by Vichan Peonim, head of the Forensic Pathology programme at Mahidol University's Faculty of Medicine at Ramathibodi Hospital, sent to the head of the faculty's Department of Pathology.

The letter, dated Oct 1, 2012, was "about the substances found in the body of Mr Vorayuth Yoovidhya as requested by the Thong Lor Police Station". The letter showed that Mr Vorayuth's body contained Alprazolam, Benzoylecgonine, Cocaethy­lene and caffeine.

Alprazolam, commonly sold under the brand name Xanax, is used to manage anxiety disorders. The drug is classified as a Type 4 stimulant, and it is highly regulated in the kingdom, the letter said. Alprazolam residues can be detected in urine from one to five days after the drug is consumed, it said.

Sira Jenjaka, chairman of the House committee on legal affairs, justice and human rights, said on Friday that the committee will invite the dentist who treated Mr Vorayuth and the vice-president of the Dental Council to testify.

"We are beginning to see the light at the end of the tunnel... If we find that the information given by the dentist was not in line with the professional code of ethics, the dentist must be held legally accountable,'' Mr Sira said.

Ms Rosana called on the parliament president to use his power to disclose information on the NLA panel's handling of the case.

Society wanted to know whether the prosecutor's decision to drop charges against Mr Vorayuth was the result of the panel's investigation, she said.