CCTV clip shows crime scene might have been tampered with

Police investigators and forensic experts arrive to collect evidence at a gambling den where four people, including a police major, were killed in a shooting in Yannawa district of the capital on Monday night. (Photo by Wichan Charoenkiatpakul)

The suspect, known only as “Boy Baan Khrua’’ in the gambling circle, turned himself in and confessed to having shot dead Thavorn Seesod, 51, at the gambling den on Soi 66 of Rama III Road, Thai media reported on Thursday.

During the interrogation, the suspect said he had fired shots at Thavorn in self-defence as he claimed the man was aiming randomly when opening fire.

The fatal shooting occurred on the ground floor of a four-storey commercial building at Soi 66 off Rama III Road on Monday night.

One man shot dead Pol Maj Watthanaset Samniangprasert and two other women. The shooter, identified later as Thavorn, was then shot dead by one or more persons, who fled the promises.

Pol Lt Gen Pakkapong Pongpetra, chief of the Metropolitan Police Bureau, on Thursday confirmed the shooting scene was a gambling den. However, he said police did not know how long it had been operating.

After the shooting, a number of people removed security cameras at the gambling den. The investigation also found there might be more than one suspect who opened fire on the shooter.

Police were gathering evidence to issue arrest warrants, he said after testifying before the House panel on police affairs over the incident.

A video clip on social media on Thursday showed a number of men hastily remove the security cameras at the premise. Pol Lt Gen Pakkapong said police were checking it and welcomed more information. (continued below)

“The prime minister and the national police chief have ordered the MPB to handle the case in a straightforward manner and take action against all involved,’’ said Pol Lt Gen Pakkapong.

On media reports that the gambling den was operated by a man known as "Hia Tee", the police investigators were also looking into it, he said. Police had obtained information about the person who rented the building and are investigating whether Hia Tee was involved, said the city police chief.

He confirmed the shooting was motivated by debts, but did not know the parties involved.

On the three dead bodies, the investigators have not concluded they were all shot dead by Mr Thavorn as they have yet to receive forensic and bullet trajectory reports.

In response to criticism, including from the House panel, that police were slow to act after the incident, Pol Lt Gen Pakkapong said they had been alerted about the shooting at 10.30pm on Monday and rushed to the scene at 10.45pm.

Speaking after the meeting of the House panel on police affairs, Chalong Riewraeng, adviser to the panel, asked why police arrived so late at the scene since the incident took place at around 8pm.

He asked police to investigate whether the crime scene was tampered with since the clip showed gambling equipment and closed circuit cameras being moved from the place.

Chuwit Kamolvisit, former leader of Love Thailand Party who claimed to know a lot about police and criminal activities in the capital, told Thai media on Wednesday that the gambling den had been operated for over 20 years by a man known as “Hia Tee’’. 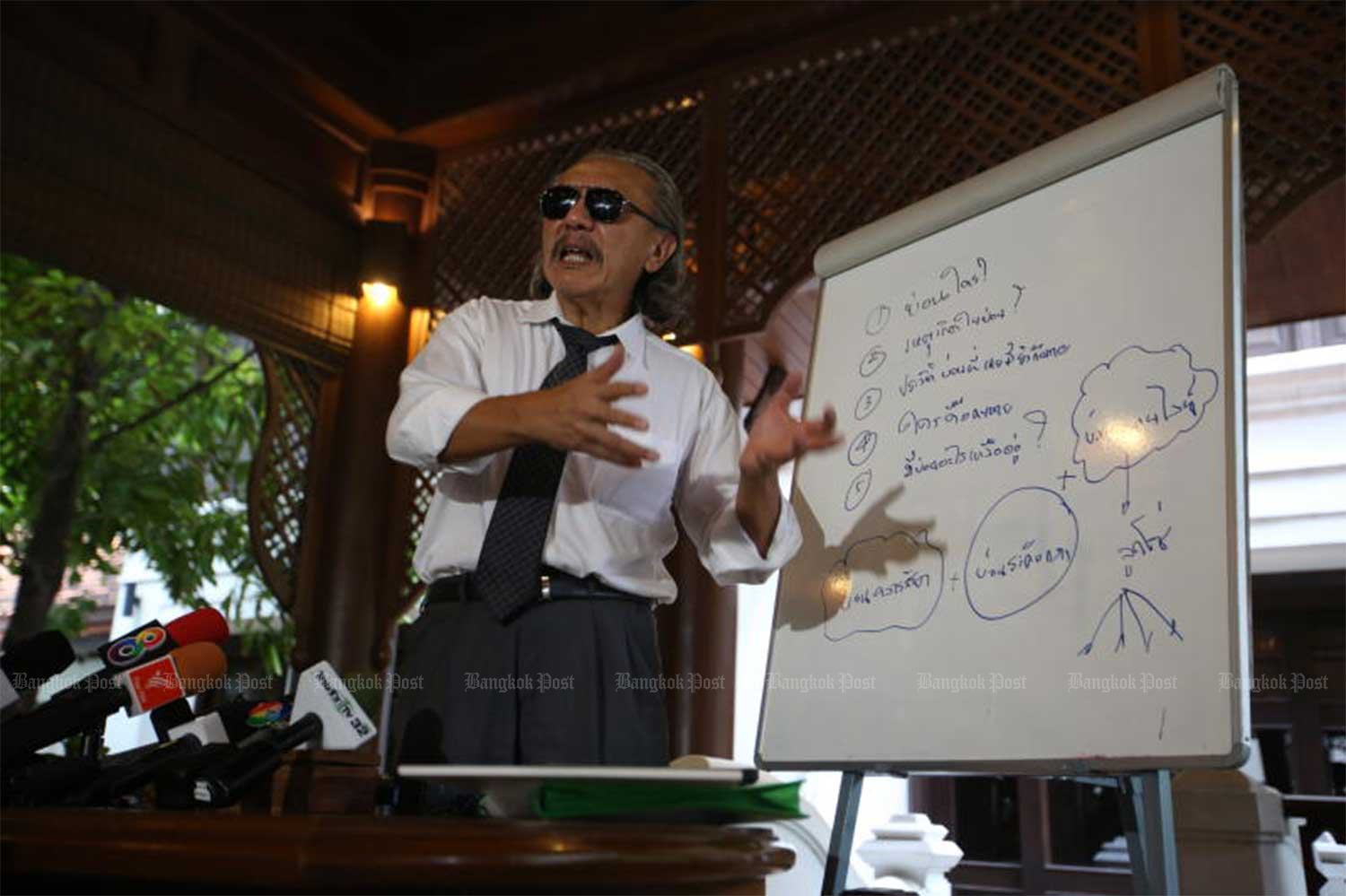 Chuwit Kamolvisit shows his notes to media as he explains about the gambling den operation in Yannawa district in which the fatal shooting on Monday night. Four people, including a police officer, were shot dead. (Photo by Arnun Chonmahatrakool)