Pro-democracy protesters stand outside the Criminal Court building demanding that a representative be allowed inside where Anon Nampa and Panupong “Mike Rayong” Jaadnok were facing a detention hearing on Saturday. (Reuters Photo)

The Criminal Court on Saturday approved bail for a lawyer and a student activist who were arrested on Friday on multiple charges including sedition in connection with their involvement in a recent anti-government rally.

Anon Nampa and Panupong “Mike Rayong” Jaadnok were released on a surety of 100,000 baht each, but the court said one of the terms is that they not commit offences in the same manner that led to their arrest in the first place.

As they left the court, hundreds of their supporters were gathering at the Skywalk across from the Bangkok Art and Culture Centre, where they flashed three-finger salutes and chanted “We are not afraid”.

Mr Anon posted a message on Facebook at 6pm saying that he would travel to Chiang Mai for a rally on Sunday as planned earlier. There, he said he would speak on the same topic he raised last Monday, when comments he made about the constitution and the monarchy touched on some highly sensitive matters.

Police had brought the two men to court on Saturday morning seeking an order of detention, saying they needed time to question six more people in connection with the Free Youth rally held on July 18 on Ratchadamnoen Avenue.

The pair were taken into custody by police armed with warrants on Friday afternoon. Samran Rat police have sought arrest warrants for 15 more demonstrators and were told to apprehend them all by Monday, Matichon Online reported, quoting police sources.

Police are also reported to be in the process of collecting evidence to seize 16 more people, bringing the total number of suspects from the July 18 rally to 31.

Mr Anon and Mr Panupong were first brought to the Samran Rat police station on Friday to acknowledge the charges against them. They were then brought to the Bang Khen station where a crowd of supporters came to monitor the situation and stayed late into the night.

In the evening, police took them to the Criminal Court to seek their detention. The court dismissed the request at 9.50pm, saying it had been submitted outside of office hours.

According to criminal procedure, police may detain a person accused of a serious crime and question them for up to 48 hours. After that, they need court approval to detain the person further. Criminal suspects can be detained for up to seven 12-day periods, or 84 days, before an indictment must be made.

For other offences deemed less serious, police need to seek an arrest warrant from the court before taking action.

After the court dismissed the first detention request, Mr Anon and Mr Panupong refused to cooperate when police tried to take them to the Huai Khwang station to lock them up.

The lawyer told police they were breaking the law. The officers argued that the court had simply returned their detention request — it did not reject it. They forcibly dragged the pair to a van and they spent the night in a cell at the Huai Khwang station.

A video clip of police officers dragging Anon and Panupong into a police van and taking them to be detained at the Huai Khwang Police Station, despite the Criminal Court dismissing the temporary detention requests. #saveทนายอานนท์ #saveไมค์ภานุพงศ์ #หยุดคุกคามประชาชน https://t.co/5xiMIM4IAW

At 10.30am on Saturday, police took them to the Criminal Court to seek their detention again. While at the court, Mr Anon sent another note to supporters encouraging them to continue the fight.

“I know a rally has been called at the Skywalk near the cutural centre at 4pm today. I’d like to ask our older members to take good care of the students. Whatever will be, will be,” he wrote.

He also wrote another note addressed to the students, urging them to campaign for issues beyond freeing him and Mike because “besides us, more of our friends are on arrest warrants”.

“If possible, I’d like that our demands be related to our previous three demands we have always stood by. Don’t ever let them use the detention of Mike and me to sway our demands,” read the note.

The protest movement has been demanding that the current government be dissolved, that the state stop harassing those who disagree with it, and that a new constitution be drafted.

Mr Panupong also wrote a note urging his peers to fight to ensure the law is not put at the service of bad people.

“Our arrests are a clear testimony that the dictators don’t want people to assemble,” he wrote. “If, having seen that, we still don’t fight, we’ll be enslaved by dictators and bullied by a judicial system that is not just.

“The time is up for fear. Let’s fight like brave people.”

He ended the note with the hashtag used by the student demonstrators — “Let’s end it in our generation”.

In front of the court, supporters demanded an open deliberation so that they, or at least their representatives, could join. Officials later agreed to allow two outsiders to attend the hearing.

The charge under Section 116 carries a maximum penalty of seven years in prison. 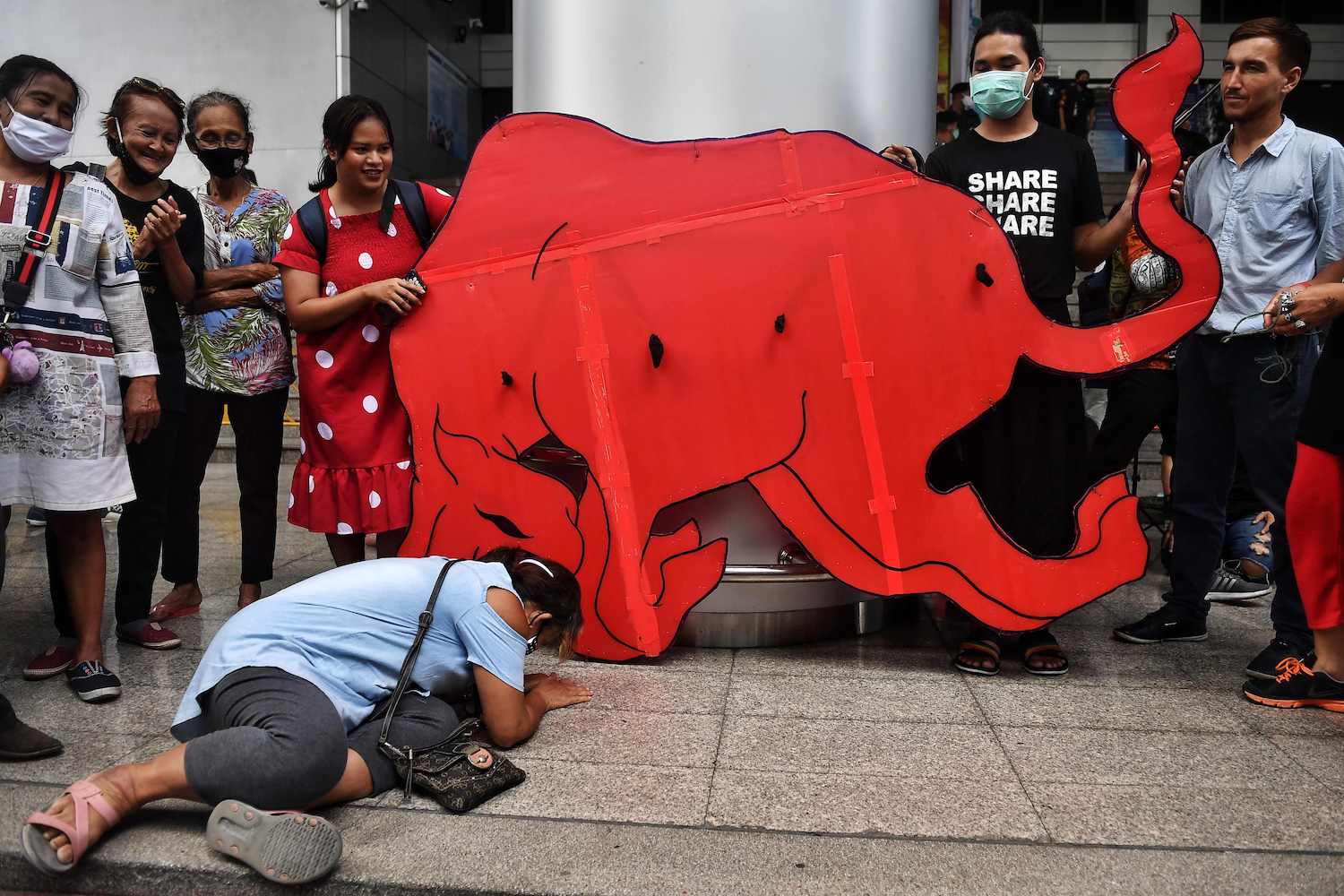 A protester prostrates herself in front of a giant Red Bull logo to draw attention to what are perceived as double standards in the Thai justice system, outside the Criminal Court where Anon Nampa and Panupong Jaadnok were appearing on Saturday. The reference was to the case of the Red Bull scion Vorayuth “Boss” Yoovidhya, who has gone free in connection with the hit-and-run death of a policeman eight years ago. (Reuters Photo)