Protesters call for the dissolution of the House during a rally at the Skywalk in Bangkok on Saturday. (AFP photo)

The gathering under the Free People banner took place while two of the movement’s highest-profile figures — human rights lawyer Anon Nampa and student activist Panupong “Mike Rayong” Jaadnok — were appearing in court where police sought to detain them for 12 days on multiple charges, including sedition, for a previous gathering in mid-July.

The court granted them bail on condition that they not commit offences in a similar manner again. However, Mr Anon vowed to travel on Sunday to Chiang Mai as planned earlier, where he said he would speak on the sensitive subject of the constitution and the monarchy.

Some 100 police at the scene tried to stop the Skywalk rally as rain sprinkled down. They used loudspeakers to inform the demonstrators that the assembly was illegal because it did not receive prior approval and violated the emergency decree still in force to deal with the coronavirus. (story continues below) 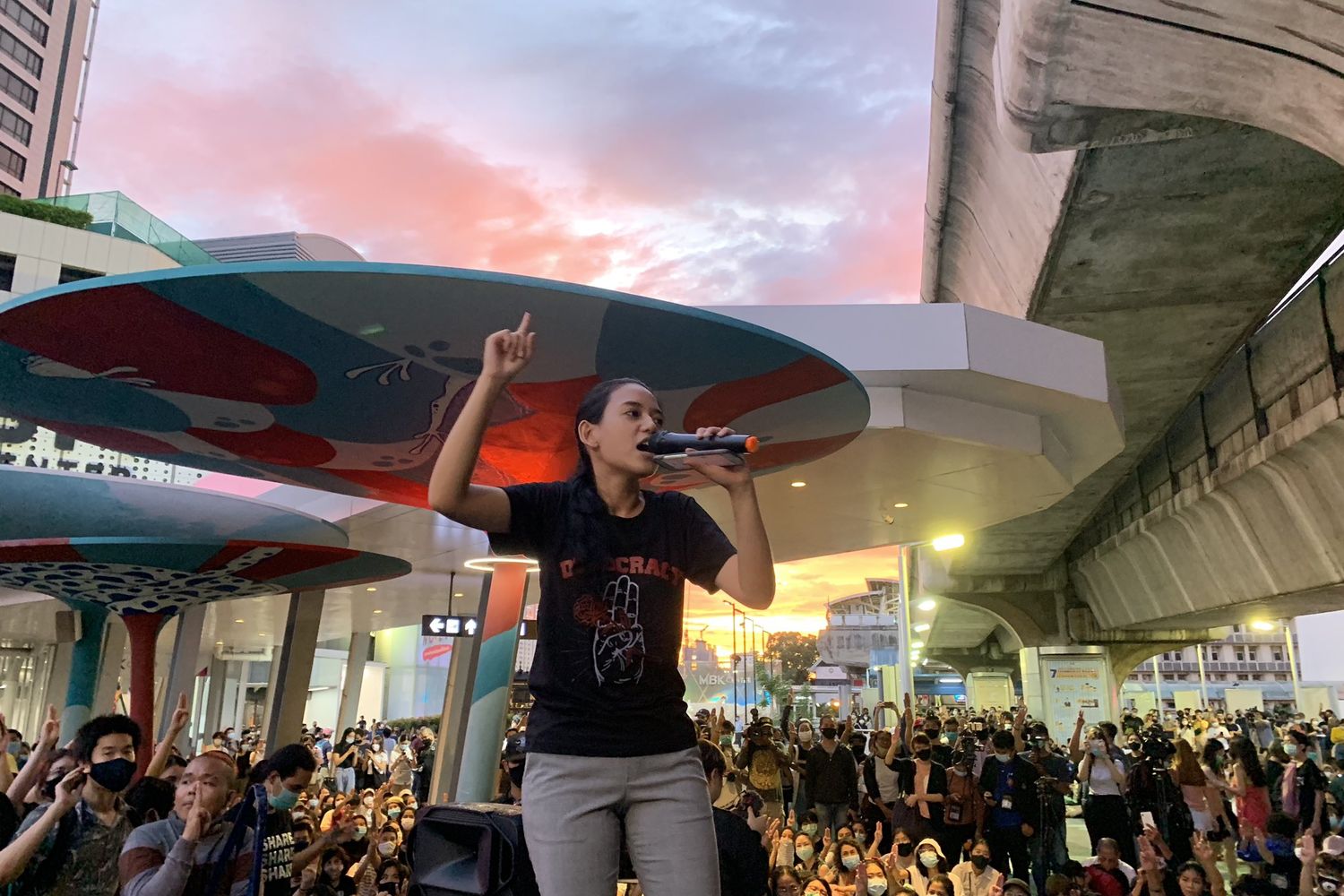 Patsaravalee Tanakitvibulpon, one of the protest leaders, speaks during a flash mob rally in Bangkok on Saturday. (Photo from Twitter@FreeYOUTH)

Juthathip Sirikan, one of the leaders of the movement, read a statement reiterating its three demands.

First, she said, the government must stop intimidating people exercising their rights and liberties. Everyone should be free to express their opinions or criticise injustice and inequality in society.

Second, they want a new constitution that reflects the will of the people and upholds the public interest, not one engineered to benefit certain groups over others. The charter in effect today, the protesters believe, has led to a dead end.

Third, they want the government to dissolve the House after fulfilling the previous demands to pave the way for a fresh election under fair rules and to show responsibility for its own failures and inefficiencies.

They also insisted on two principles — no more coups and no “national unity” government, a compromise floated by some in which all parties would have roles in the administration.

A large red mockup bull was also brought to the site as a symbol of the movement’s fight to seek justice for Mr Anon and Mr Panupong. It was intended to remind people of double standards — a son of a Red Bull owner walks free after killing a policeman in a hit-and-run eight years ago while anti-government demonstrators are prosecuted.

Some young protesters also mentioned university degree certificate presentation ceremonies, which many have vowed not to attend.

Music and three-finger salutes were also featured at the event, which was expected to end around 8pm.