Student leader arrested ahead of rally

Thanathorn calls for talks, not crackdowns, as Parit faces sedition and other charges

Student leader Parit Chiwarak was arrested on Friday on multiple charges including sedition, as tensions escalate ahead of a major pro-democracy rally planned for Sunday afternoon in Bangkok.

The arrest took place at Muang Thong Thani as the Thammasat University student prepared to join an anti-government event in Nonthaburi. After a Metropolitan Police Bureau official read out the arrest warrant, four plainclothes officers picked Mr Parit up by the arms and legs to drag him into an unmarked car after he refused to go.

Dozens of onlookers used their phones to take videos that were posted to Twitter, where #SaveParit started trending instantly, attracting 1.6 million tweets as of 9.30pm.

He was taken to the Samran Rat police station where he faces charges including sedition, assault and holding an event that could spread a disease. Dozens of supporters were gathering outside the station in the rain on Friday night to demand Mr Parit’s release. They cheered when he appeared briefly in a second-storey window and waved to them.

The allegations stem from a rally staged by the Free Youth movement at Democracy Monument on July 18. It was the first major protest against the government since the easing of restrictions imposed to stem the coronavirus outbreak.

Mr Parit, known by his nickname Penguin, is also reported to be facing a lese majeste charge but it was not included in the charge sheet on Friday.

The Free Youth and Free People movements issued a statement demanding the immediate release of the student activist, saying the police action underlined the intention of authorities to intimidate critics of the government.

Soon after the arrest, a number of individuals and groups, including Thammasat University, stepped forward to offer to help Mr Parit seek bail.

The arrest came a week after the seizure of human rights lawyer Arnon Nampha and Rayong student activist Panupong Jadnok, who are charged with the same offences as Mr Parit. They are currently free on bail after the Criminal Court declined a police request last Saturday to detain them for 12 days.

One of the conditions of the men’s bail is that they refrain from any acts similar to those that led to their original charges. The police say they have since breached those conditions and have petitioned the court to withdraw bail. A hearing is scheduled for Sept 3.

Mr Panupong was at the Samran Rat police station on Friday night to show his support for Mr Paritt.

The political temperature has been rising all week as students continue to press their demands, which include House dissolution, the end of intimidation against critics of the government, and the drafting of a new constitution.

The potential for confrontation has been increasing since Monday, when thousands who rallied at Thammasat University heard speakers issue an unprecedented 10-point manifesto calling for reform of the monarchy under the constitution.

Prime Minister Prayut Chan-o-cha said that while people had the right to free expression, dragging the monarchy into the debate was out of line. He has also ordered an investigation into the funding of the Thammasat event, which included elaborate audio-visual displays.

Progressive Movement leader Thanathorn Juangroongreangkit said earlier on Friday that the protesters’ demands should be on the table for talks, as crackdowns will not solve the country’s political problems.

He also called for all sides to be open-minded about finding a solution and criticised Gen Prayut for a lack of sincerity. The prime minister earlier said he wanted to set up a forum to listen to what the students had to say, but now the authorities have been brought in to tame them, the former leader of the court-dissolved Future Forward Party said.

Mr Thanathorn made the remarks before the arrest of the student activist. 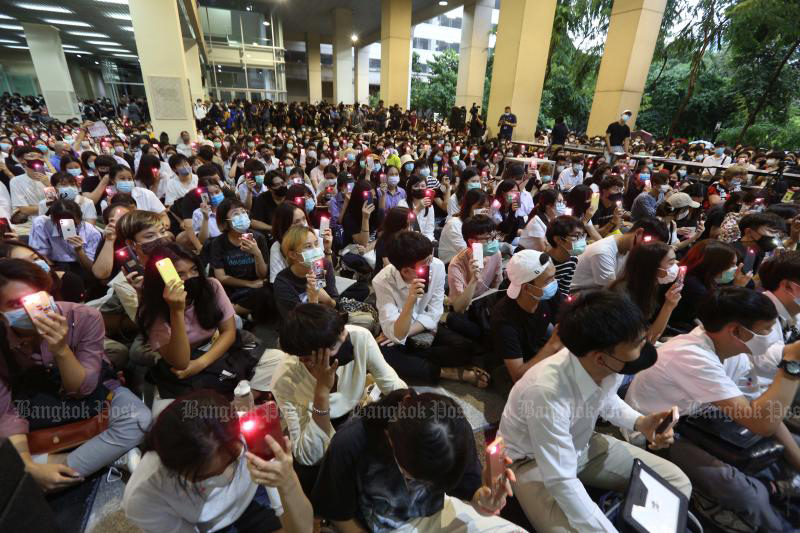 Students gather for an anti-government rally in the Faculty of Arts building at Chulalongkorn University on Friday afternoon. (Photo by Pattarapong Chatpattarasill)

Elsewhere on Friday, hundreds of protesters braved the rain to gather at the Faculty of Arts of Chulalongkorn University demanding the restoration of democracy, despite the university’s refusal for them to use the campus for a demonstration, citing safety concerns. The area around two royal statues was fenced off to prevent students from approaching it.

In any event, the rain eventually forced the demonstrators inside the faculty building, where the crowd grew to about 800 as the evening wore on.

#MilkTeaAlliance Parit, a student activist, was arrested by security officials. He was carried to a car without the police logo. Before the arrest, he posted on sns that he was filed charges of lese majeste. Let’s #SaveParit pic.twitter.com/kqM6OenzBS