Provinces in the lower part of the northern region are braced for flooding after downpours have submerged several areas for several days.

Chamnan Chuthing, director of the irrigation project in Phitsanulok, said on Sunday it was diverting water from the Yom River to tributary canals as it expected more water from the river to reach downstream provinces -- first in Sukhothai and later Phitsanulok -- by Sunday.

He said the department was also preparing for possible flooding in low-lying fields in Phitsanulok and warned people living along the Yom to stay vigilant and closely watch the water level.

The latest forecast from the Meteorological Department showed rain was subsiding in the northern and northeastern regions. But duty officer Prapaporn Wongsaming said people living along the western border should not lower their guard. 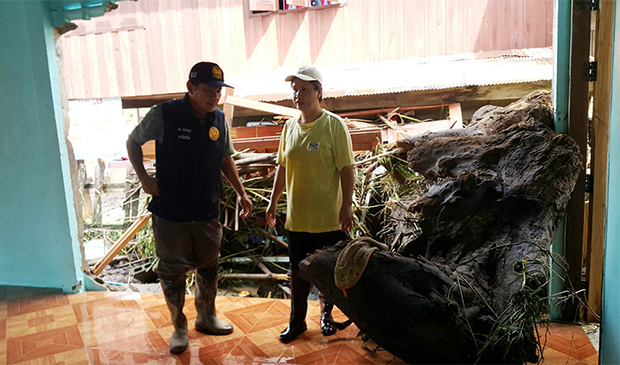 Provinces in the upper the northern region have been inundated since Thursday due to heavy rain. Wieng Sa in Nan was among the hardest-hit districts.

Floods hit eight northern provinces, including Nan -- where one man was killed -- and affected almost 4,000 households, according to an update of the Disaster Prevention and Mitigation Department issued on Sunday.

Khammalin Khampaengla said on Friday that runoff carried part of a huge tree trunk into her house at Ban Pong Sanuk after her family escaped to higher ground.

"The floodwater was strong so I and my husband decided to evacuate for safety," she said upon returning to repair her house on Sunday.