Students join hands on Monday in a bid to protect the Chao Mae Thap Thim shrine from demolition. (Photo by Arnun Chonmahatrakool)

The #SaveChaoMaeThapThimShrine hashtag in Thai appears to be a last-ditch effort of a group of Chulalongkorn University (CU) students to save an old shrine from being flattened by the university's property management office to make way for another commercial complex.

About two dozen CU students on Monday formed a human chain at the Chao Mae Thap Thim Shrine and rallied in front of the Property Management of Chulalongkorn University office on the campus to protest the plan to dismantle the symbolic dwelling of the goddess.

"Do not demolish the Chao MaeThap Thim shrine, our heritage united with our spirit," reads a banner of the protesters outside the office.

The property management arm is responsible for generating revenue from more than 385 rai of the university's land, an area in the heart of the capital stretching from Siam Square to the Suan Luang and Samyan areas.

"Maximise value for society," the office proclaims in a motto on its website, which claims its work focuses on the harmonious coexistence of development and the local community.

The students have argued that the decision to bring down the shrine, located near the Samyan market, in order to build a dormitory for students and university personnel goes against that principle. 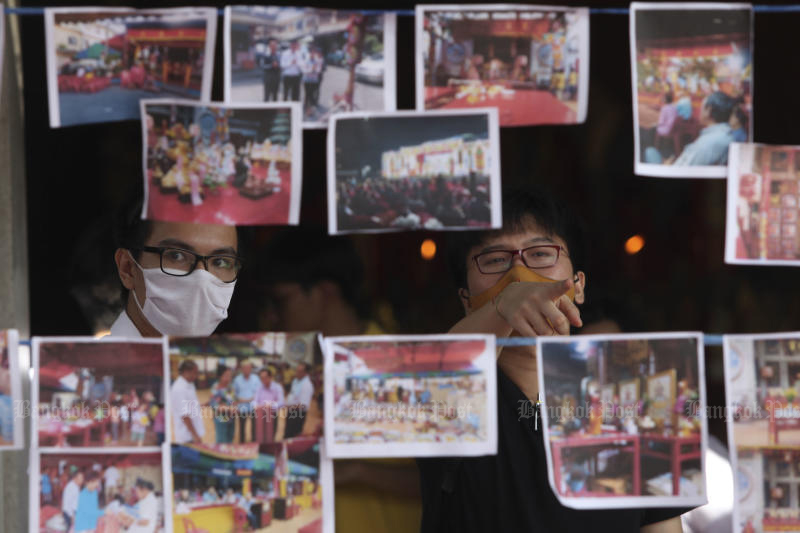 A photo exhibition is displayed at the shine in the Suan Luang neighbourhood to protest against the plan to relocate the shrine to a new site. (Photo by Arnun Chonmahatrakool)

Under the plan, all the buildings around the shrine would be flattened and the shrine relocated to the university's Centennial Park nearby.

The new location "will be suitable in all aspects, from safety and cleanliness to parking space and accessibility," the office said.

But present and former students argue the office has concentrated on making money while ignoring history and the bond between the local community and the goddess of the shrine.

"The new generation of students wants to protect history [and prevent the shrine's demolition] for the construction of a condo," student activist Netiwit Chotiphatphaisal tweeted.

The shrine is particularly cherished by people living in the Suan Luang and Samyan communities where it is located. The present shrine was built in 1970 after it was moved from another site.

The demolition of the shrine has been delayed from June 15, but the office posted a banner saying the new shrine will be ready by early next year.

The protest on Monday came amid expectations that the shrine will be demolished soon.