Parit “Penguin” Chiwarak (centre) gives a three-finger salute outside the Muang district police station on Saturday, where he and two colleagues heard charges related to a July 26 rally in Lampang. (Photo by Assawin Wongnorkaew)

LAMPANG: Three activists reported to police on Saturday to hear charges against them in connection with an anti-government rally in this northern province in July.

Among them was Parit “Penguin” Chiwarak, a Thammasat University student who already faces multiple charges including sedition stemming from his activities in the pro-democracy movement in Bangkok. He was joined on Saturday by Phinit Thongkham, a student at the Thammasat Lampang campus and a leading member of the Pirab Khao Pheu Muanchon (white doves for the people) group; and Thanawat Wongchai, who helped run the Wing Lai Lung (Run to Oust the Uncle) events last year

Muang district police had issued summonses to the trio on charges of colluding in organising an activity or assembly that provoked unrest and holding an activity that increased the risk of spreading contagious diseases. The event in question took place at Khuang Nakhon in Muang municipality on July 26.

About 30 students and supporters of the activists converged in front of the police station with a banner bearing the Pirab Khao Pheu Muanchon logo, and another one that read “Stop harassing people, draft a new constitution and dissolve Parliament” — the three core demands of the youth-led movement.

They flashed three-finger salutes and brought white ribbons to symbolise their opposition to the military-aligned government that retained its power through a contentious election last year. Mr Parit and his two colleagues were released after meeting with police to hear the charges.

Mr Parit said more police stations were preparing to issue summonses to him and he vowed to report to every one and continue making speeches in support of the cause.

He said human rights lawyer Anon Nampa was also issued a summons to report to Lampang police. However, Mr Anon and fellow activist Panupong “Mike” Jadnok had their bail revoked this week and are now behind bars in Bangkok Remand Prison.

A few dozen supporters staged a rally outside the prison late Friday in support of the pair, tying white ribbons to the prison gates.

He said he rejected all the charges against him and was prepared to continue fighting the legal battle.

Mr Parit has also vowed to lead protesters to occupy Sanam Luang when they gather again for a major rally planned for the Tha Prachan campus of Thammasat University in Bangkok on Sept 19. 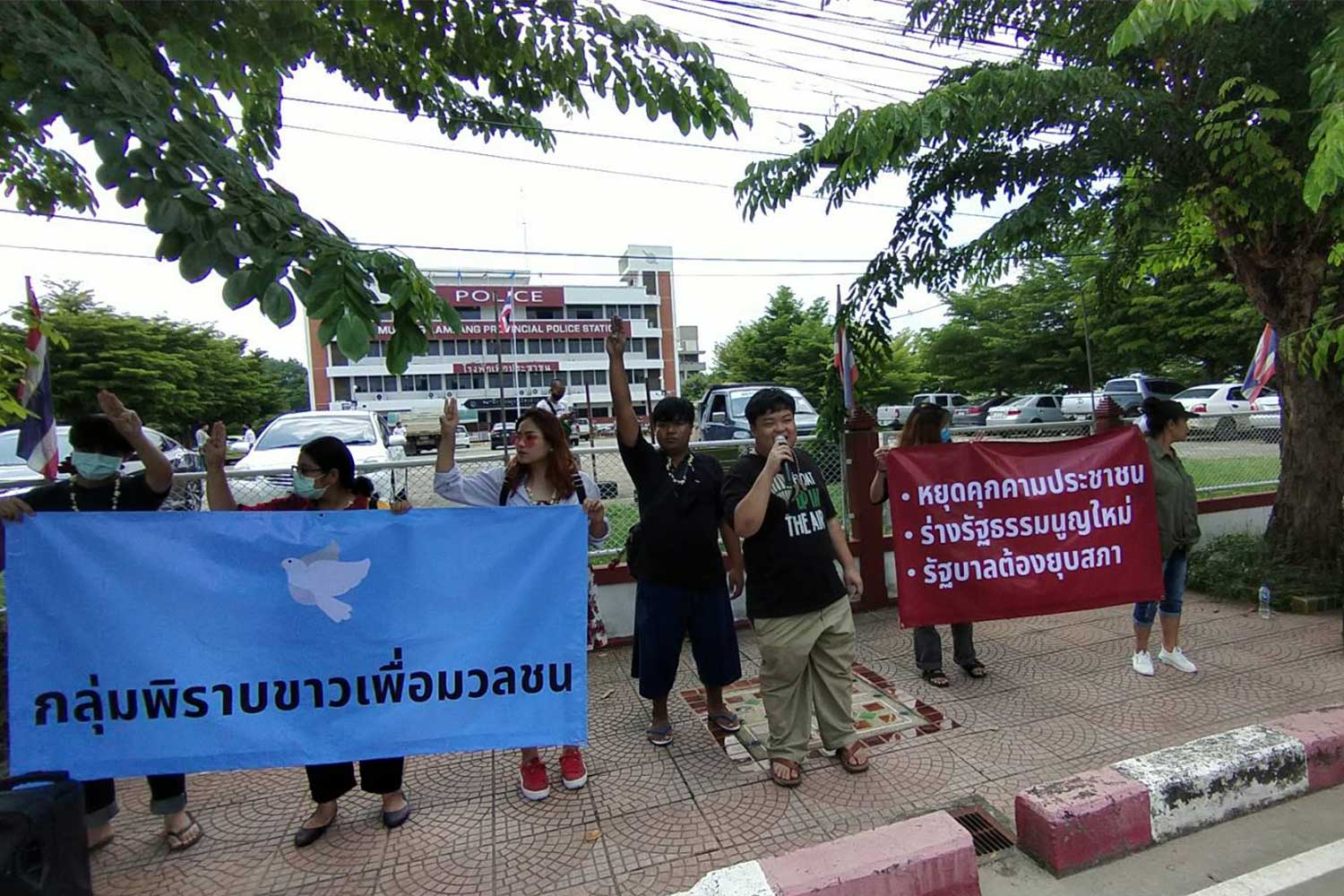 Student activist Parit “Penguin” Chiwarak, centre, makes a speech outside the Muang district police station in Lampang on Saturday. Supporters carry a banner bearing the logo of the Pirab Khao Pheu Muanchon (white doves for the people) group, and another one that reads “Stop harassing people, draft a new constitution and dissolve Parliament”. (Photo by Assawin Wongnorkaew)