Plans to divert water from Songkhram River a worry

The Songkhram River is home to a large area of ecologically rich wetland in Nakhon Phanom which was formally recognised by Unesco as a 'Ramsar Site' in May. (Photos by Pattarapong Chatpattarasill)

The Office of National Water Resources (ONWR) is going to submit the environmental impact assessment (EIA) on two controversial barrages to be built on the Songkhram River, known as one of few pristine rivers in the country, and home to wetland recently registered by Unesco.

Somkiat Prajamwong, secretary-general of the ONWR, said the office hired a private environmental firm named Mahanakorn Consultants to carry out the EIA on the proposed barrages.

He told the Bangkok Post that the office is intent on speeding up the project and the study, which is almost complete, will be forwarded to the Office of Natural Resources and Environmental Policy and Planning (Onep) to give it the green light to proceed.

"The project is very important in order to keep as much water as possible in Thai territory for use in the dry season. We don't want to let it flow into the Mekong River without obtaining any benefits as water [shortages] will be an even bigger issue in the future," said Mr Somkiat, adding that the whole system can feed 408 million cubic metres of water annually to 690,595 rai of farmland.

The project comprises 1,644 big and small water irrigation systems such as canals, flood gates, barrages and reservoirs. The Royal Irrigation Department (RID) will oversee the project and by next year at the latest ask the government to approve a 14.8-billion-baht budget for the developments.

However, the two barrage projects along the Songkhram River are worrying conservationists. One will be built in the middle of the river course and the other four kilometres away from the mouth of the river which links it to the Mekong River in Tha Uthen district of Nakhon Phanom province.

The barrages will be designed to channel flow inland. According to the ONWR, the barrage to be placed in the middle of the river in Sakhon Nakhon's Akat Amnuai district will be 12.5 metres in length and 11.5 metres in height, with eight flood channels.

The sluice gates will mostly be closed during the dry season and prevent water from flowing down to the Mekong River. Pumping stations will be set up to divert water from the river into 81 nearby retention zones. Farmers will then have to pay the electrical costs of the pumping stations which will channel the water to their paddy fields.

The 14.8-billion-baht project is expected to change the course of the Songkhram River, one of the few rivers in the country currently unencumbered by man-made infrastructure.

The Songkhram River is 420 kilometres in length and snakes through Sakhon Nakhon, Udon Thani, Nong Khai, Bung Kan and Nakhon Phanom in the upper northeastern region

In May, Unesco registered the 34,381 rai wetland area in Nakhon Phanom as a Ramsar Site, a term for areas with significant ecological value.

This watershed area is home to over 124 freshwater fish and 208 plant species, together with birds, reptiles and other animals.

The local fishing community also catches 45,000 tonnes of fish a year, which contributes significantly to the local economy.

Hannarong Yaowalers, a veteran con- servationist, said the barrage will affect water flow and block fish migration. He also warned about water salinity intrusion as the upper river is connected to the underground salt dome. "Supplying water into that area might introduce salt water into the freshwater ecology," he said.

Mr Hannarong also advised the ONWR to send the project to the National Environmental Board (NEB) to approve instead of the Environment Ministry due to its experience in approving high-level projects and the fact that it has a dedicated special committee and experts on wetland ecology.

Sanit Piriyapongpun, managing director of Mahanakorn Consultants, however, moved to allay fears, saying the project will include special fish passages so that seasonal breeding migration to the inner wetland will not be disrupted.

"The Kam River basin model shows that the majority of fish species use these passages so we are confident that there will be no impact on fish traffic along the river," he said.

Mr Sanit said the Songkhram River basin was more fertile in the past, with 183 fish species between 1978 and 2005. Last year, he said, only 10 species had been noted. 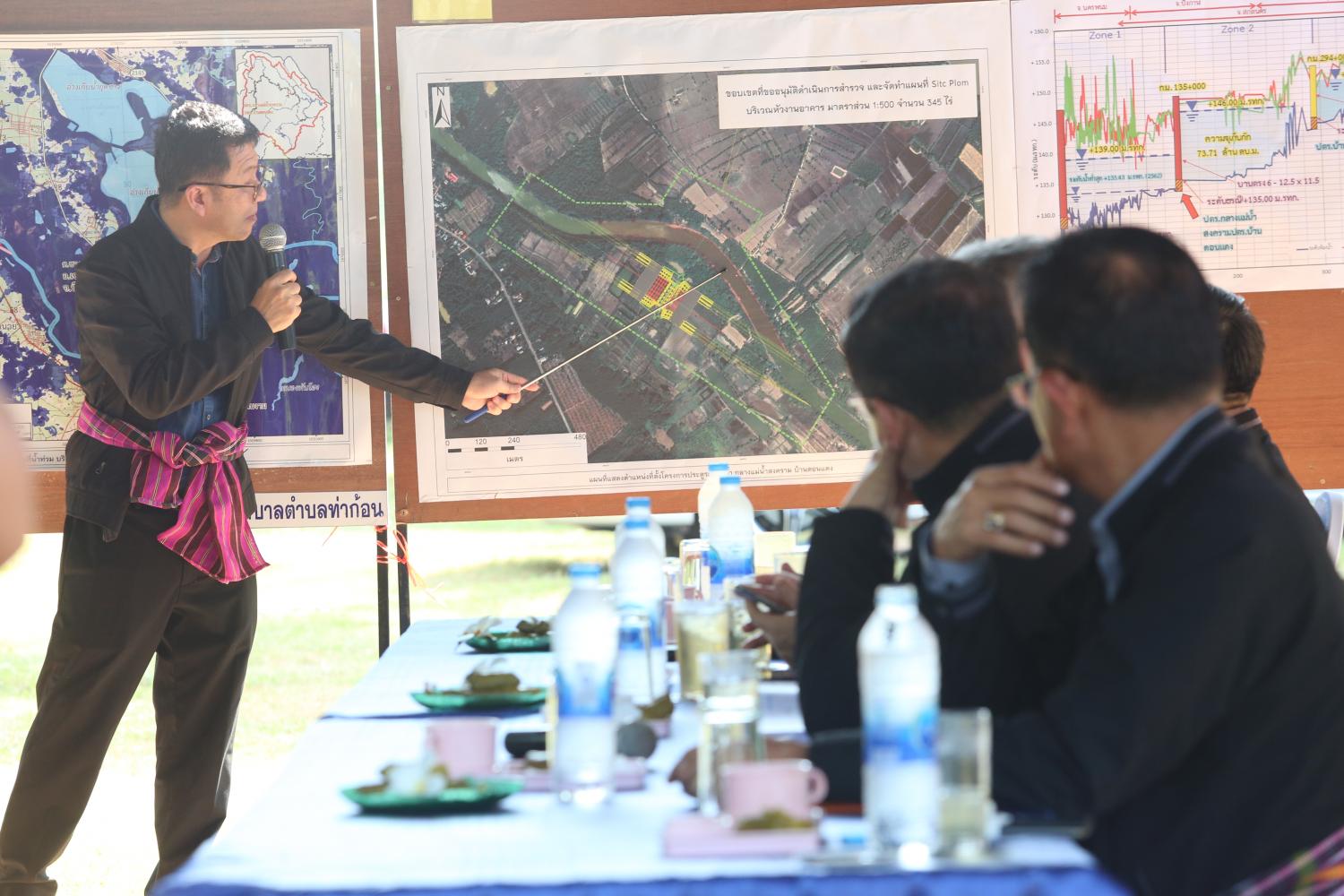 Somkiat Prajamwong, secretary-general of the Office of Natural Water Resources, far left, gives a briefing on the project during a visit to Sakhon Nakhon province last week.