A worker walks toward one of the seven fire engines that will be on standby at Government House to prepare for a rally that protesters intend to stage on Sunday. (Photo by Chanat Katanyu)

Pro-democracy protesters may have to defy rain this weekend, as the capital is an expected target of tropical storm Noul, which already drenched some northeastern provinces on Friday.

The latest Meteorological Department warning, issued at 5pm on Friday, said Bangkok would be among some 50 provinces hit by rain or heavy rain through Saturday.

The weather in Bangkok might be better on Sunday, with a weakened storm affecting about a dozen provinces.

The weather agency said 90% of Greater Bangkok would be covered by thundershowers on Saturday and the percentage would fall to 60% on Sunday.

Noul made landfall in Vietnam on Friday, triggering heavy rain in the central part of the country, though authorities later downgraded the weather system. It moved across Laos and then into northeastern Thailand, where it caused floods in many locations.

Saturday’s student-led rally is scheduled to start at 2pm, and the protesters have vowed to camp out overnight before marching to Government House on Sunday. They vow to stage the protest at the Tha Prachan campus of Thammasat University, although the school has banned the activity. Another possible site will be nearby Sanam Luang.

Tens of thousands are expected to join the demonstration, with protesters from other provinces travelling to the capital, including activists in Nakhon Ratchasima who have said that at least 200 will board buses to Bangkok on Sunday.

Amid a daily drumbeat of warnings from officials about the possibility of violence — the students insist it won’t come from their side — authorities have made extensive preparations with more closed-circuit TV cameras installed at Government House and surrounding areas and seven fire engines seen in the compound.

Deputy Prime Minister Prawit Wongsuwon, who is overseeing the security response, said all important state buildings would be well protected.

The Metropolitan Police Bureau has advised motorists to avoid roads from Sanam Luang to Government House on the weekend. (story continues below) 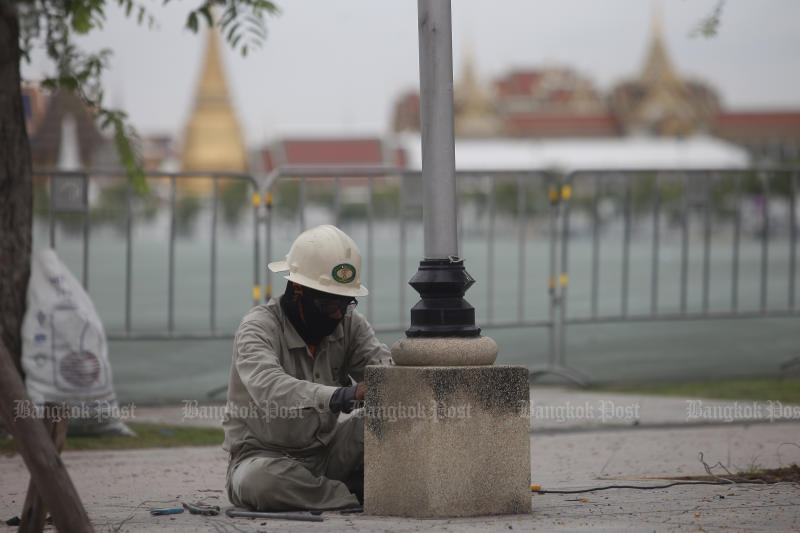 A Metropolitan Electricity Authority worker checks a lamp standard at Sanam Luang ahead of a major demonstration planned against the government on Saturday. (Photo by Nutthawat Wicheanbut)

The Free People movement posted a Facebook message on the eve of the rally urging authorities to provide safety for the protesters throughout the weekend.

The protest organised by the United Front for Thammasat and Demonstration group will focus on three demands: a new constitution, House dissolution, and no votes from senators to select a prime minister.

However, one prominent student leader said on Friday that calls to reform the monarchy were still on the table.

“We are peaceful, but there could be tension this weekend,” Panusaya Sithijirawattanakul, a Thammasat student leader, said on Friday.

She vowed that protesters would repeat their call for reforms to the monarchy, a once-taboo topic that has led many conservatives to criticise the youth-led movement.

“The plan is not to destroy the monarchy but to modernise it, to adapt it to our society,” she said.

The demonstrations that have been taking place since July have been peaceful, though their unprecedented calls for frank and public discussions about the monarchy have sent shockwaves through the kingdom.

“We believe that if the government does not start violence, there will be no deaths,” said Jatuporn Prompan, a leader of the red-shirt United Front for Democracy against Dictatorship (UDD). The so-called red shirts, supporters of ousted former premier Thaksin Shinawatra, staged massive protests in the capital a decade ago that ended in a military crackdown that left dozens dead, while arson and violence were also blamed on protesters.

“When people want political change, they only have one way, which is street protest,” said Pipob Thongchai, a former leader of the People’s Alliance for Democracy — the anti-Thaksin yellow shirts who in 2008 staged an economically crippling shutdown of Suvarnabhumi Airport for several days.

Authorities have so far arrested more than two dozen student protesters, charging them with sedition before releasing them on bail.

Gen Prayut has in the past warned that the country could be “engulfed in flames” if the student movement goes too far.

On Thursday he urged against large gatherings, saying it could increase the risk of a second coronavirus wave in the kingdom.

“Sparking a new wave could cause a bad impact. … The protests will cause a delay in our economic recovery,” he said in a televised address.

Police said they would deploy 10,000 officers around the area to monitor events.