A person is seen running away from a huge fire. The scene was captured by an on-dash mounted camera. (Photo by Ton Prakan)

SAMUT PRAKAN: Energy company PTT is investigating the cause of a gas pipe explosion in Bang Bo district yesterday afternoon, which killed three women and injured more than 50 people.

The company said the explosion happened after natural gas leaked from a pipe leading to the Asia Industrial Estate Suvarnabhumi at about 1pm and caught fire.

PTT has set up a operations centre at Preng Ratbamrung Temple for people affected by the blast and said they would be given accommodation and food.

The company has also said it will foot the medical expenses of the injured and pay compensation to the families of the deceased. 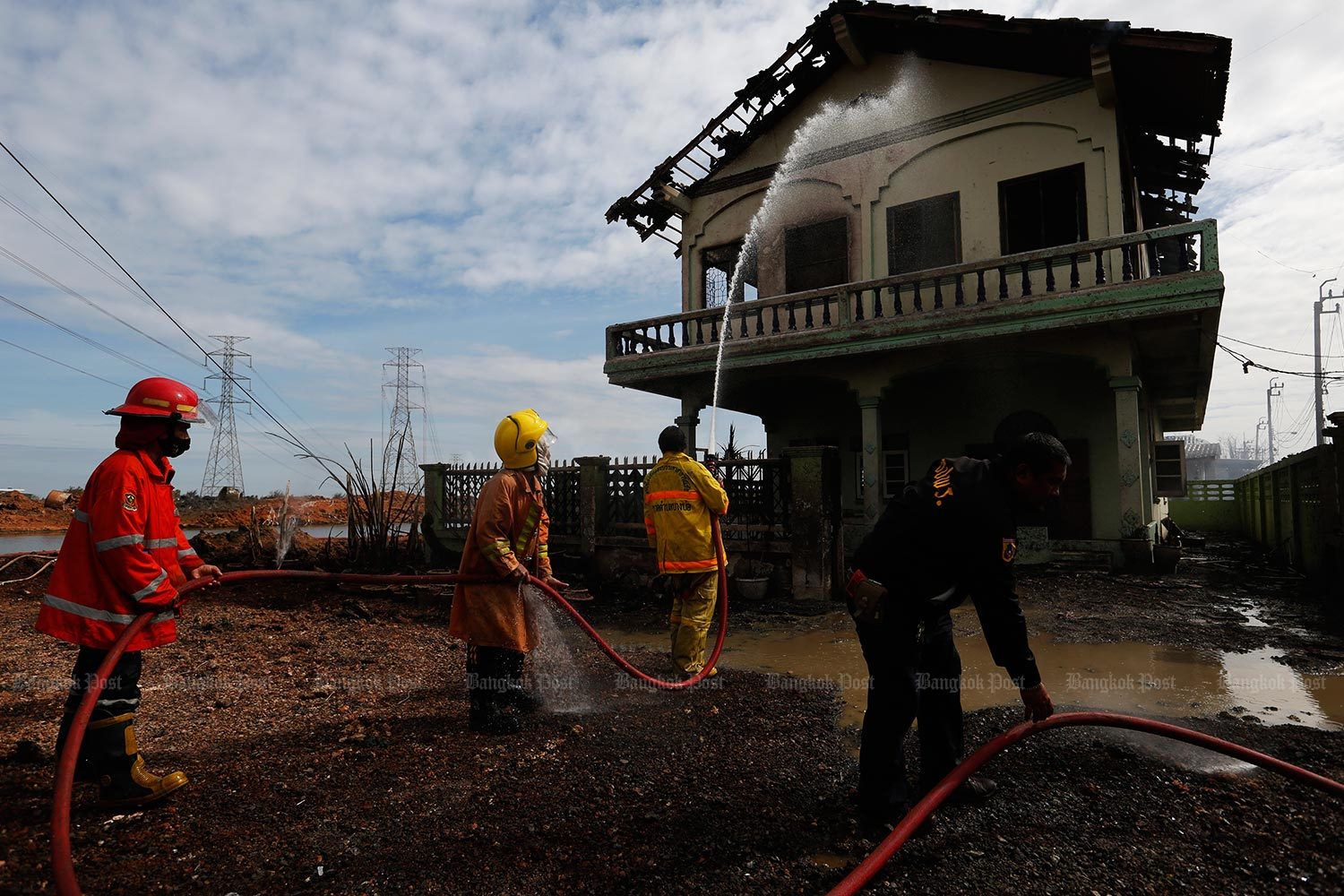 Firemen douse a house that was caught in a gas pipeline blast in Samut Prakan yesterday. Three women were killed and at least 50 others injured when the PTT gas pipe exploded in Bang Bo district. (Photos by Arnun Chonmahatrakool) 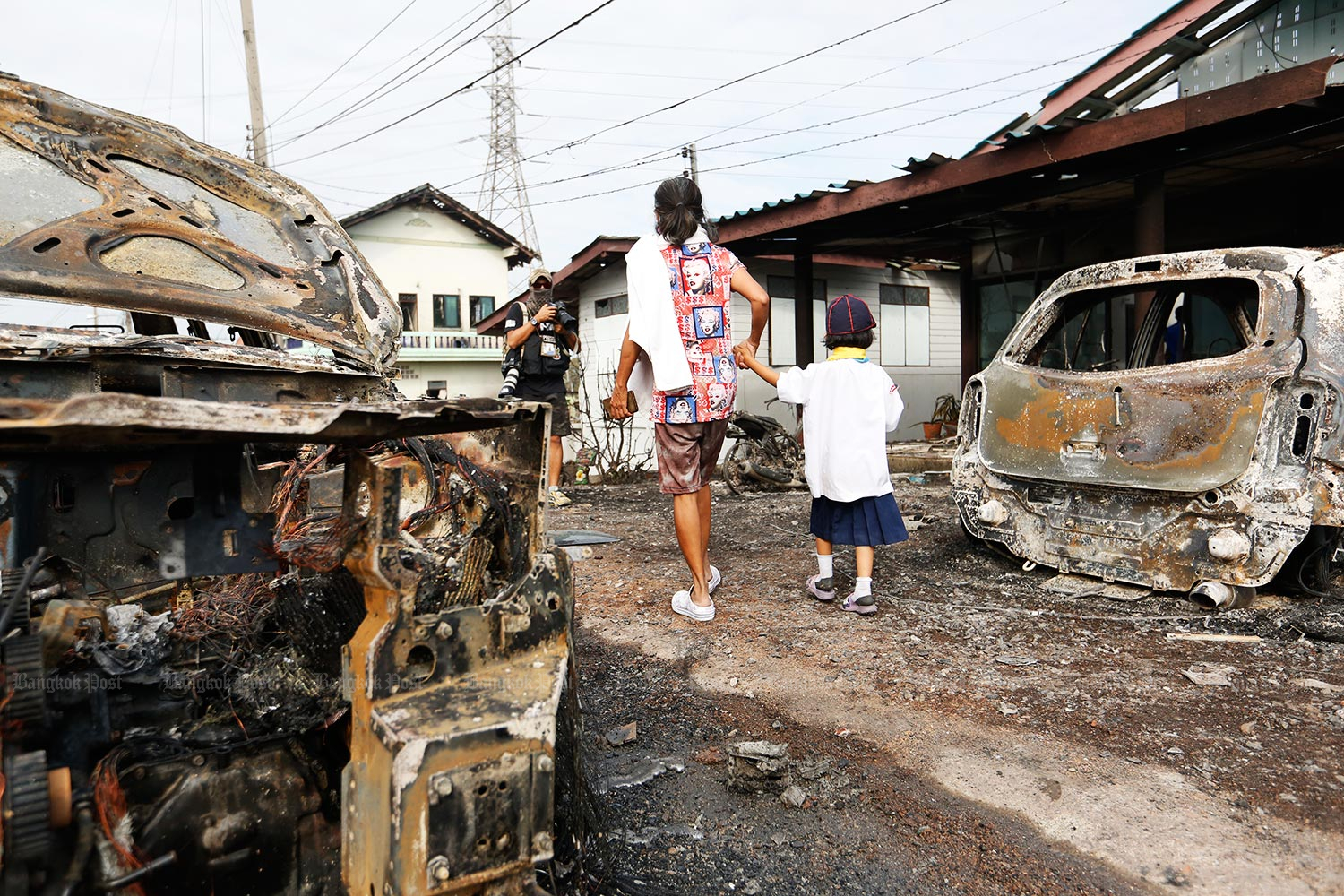 A woman and a girl walk through a badly damaged part of their community following the huge blast and fire. (Photos by Arnun Chonmahatrakool) 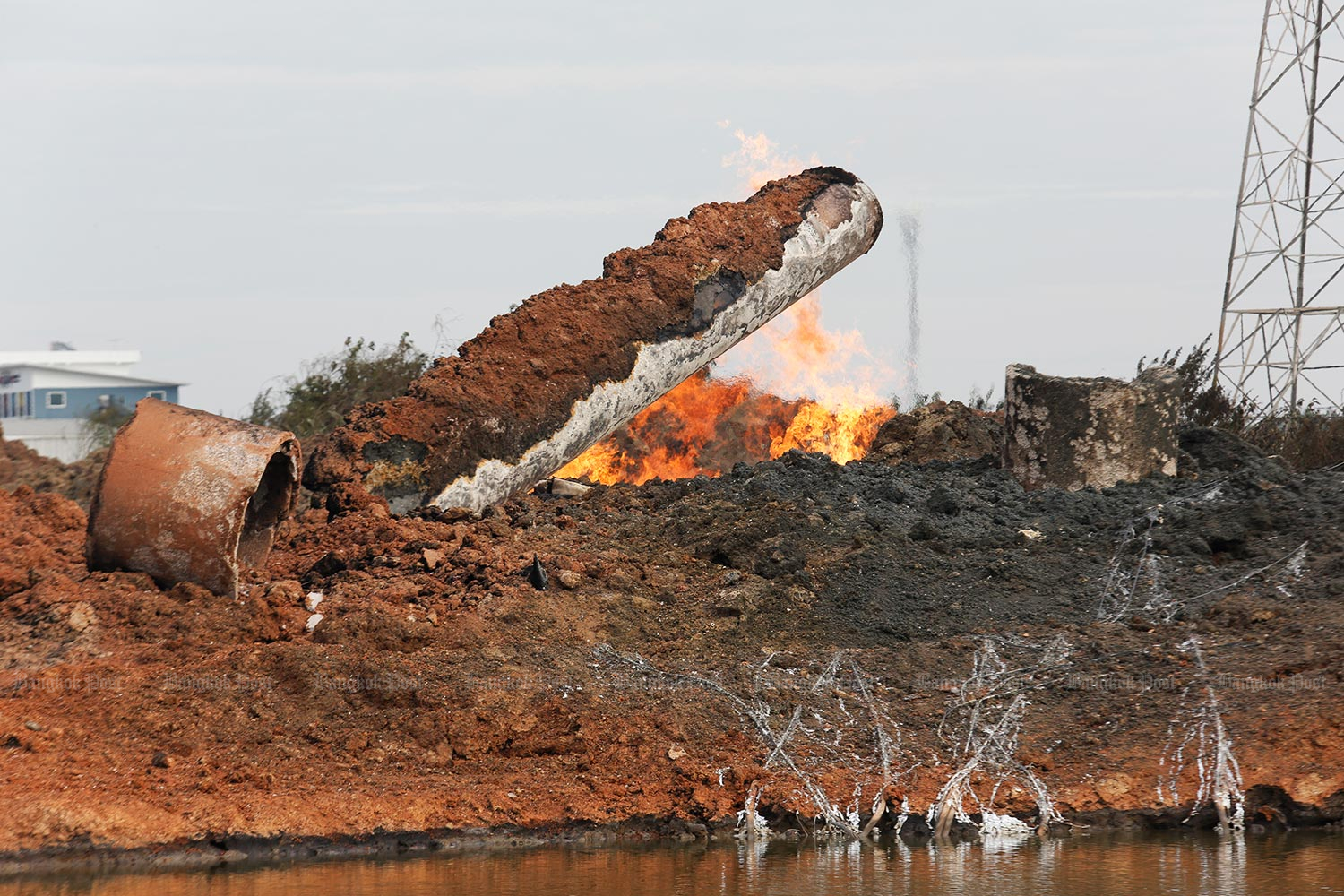 A fire burns in the distance as firefighters battled blazes that were brought under control by late afternoon yesterday. 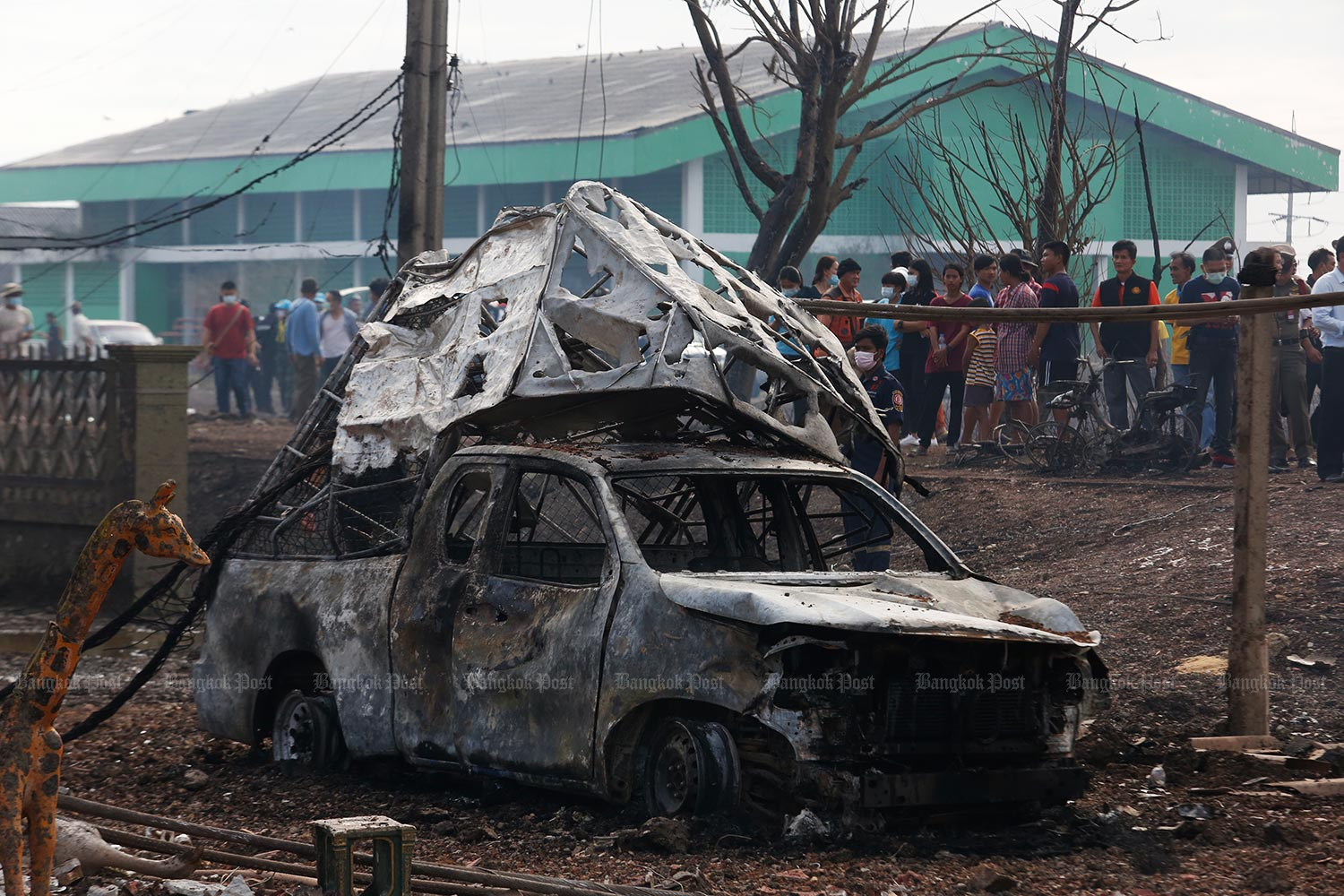 A burnt-out vehicle is seen here as a crowd of onlookers survey the scene of devastation. 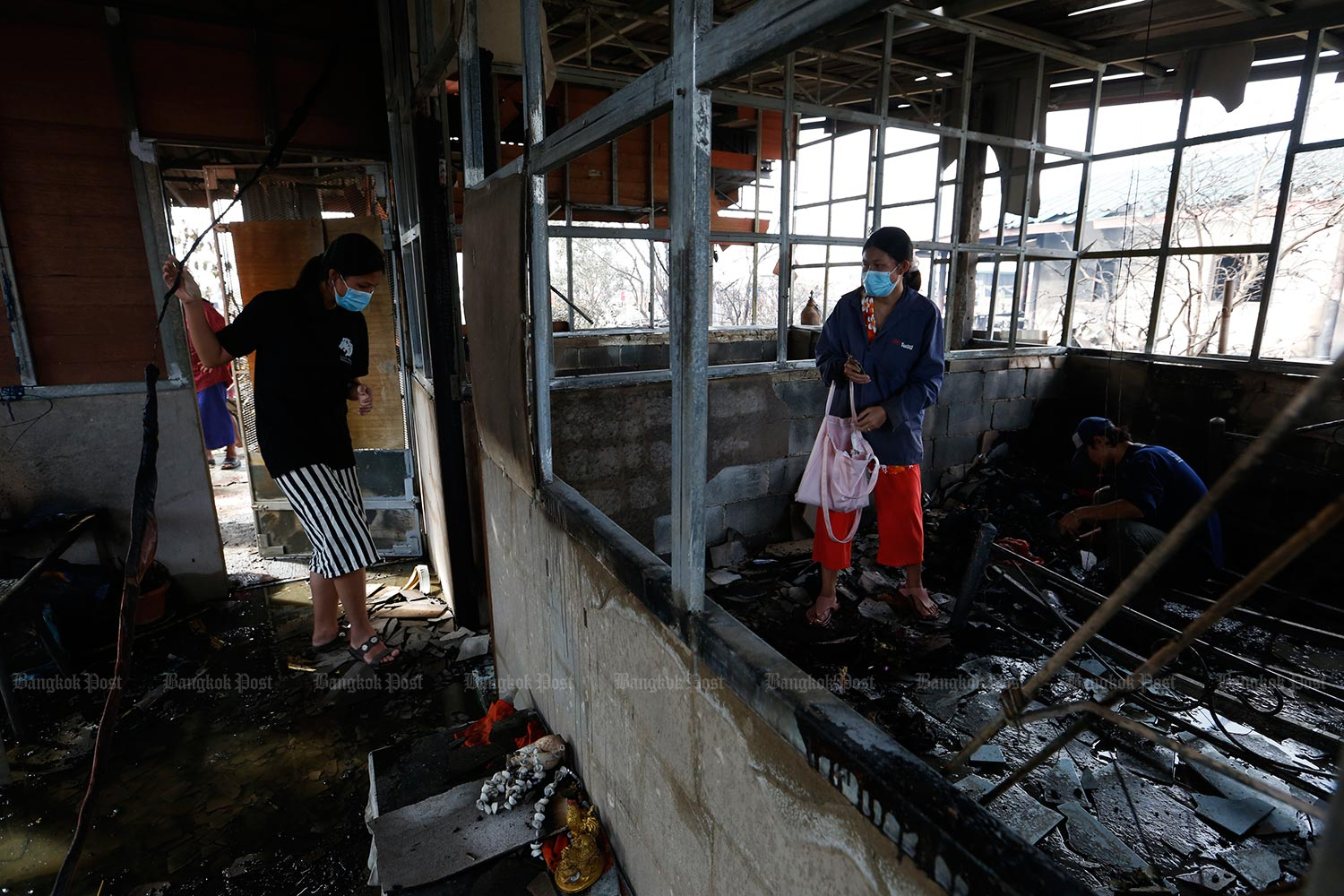 People examine the damage in one of several buildings set ablaze in the huge explosion.

Police said the explosion was on 200 Years Road, opposite Preng police station, and caused nearby residents to flee. Some of their homes were seen engulfed in flames, which quickly spread, and other residents were evacuated by police.

The victims were identified as Mali Boonman, an 81-year-old bedridden woman, who died in her house, and Lamai Harnhiran, 82, who died in hospital. At press time last night the third victim had not been named.

Pol Col Chootrakul Yosmadee, chief of Samut Prakan police, said the fire spread to a wide area and the smoke and fumes were noticeable more than 1km away.