King thanks man who held up royal picture
Thailand
General

King thanks man who held up royal picture

Their Majesties the King and Queen thanked supporters, including a former yellow-shirt leader and a man who last week raised a photo of His Majesty King Bhumibol Adulyadej The Great and Her Majesty Queen Sirikit The Queen Mother near a rally site of young demonstrators demanding monarchy reform, as yellow-clad royalists converged in mass gatherings across many provinces and vowed to protect the monarchy yesterday. 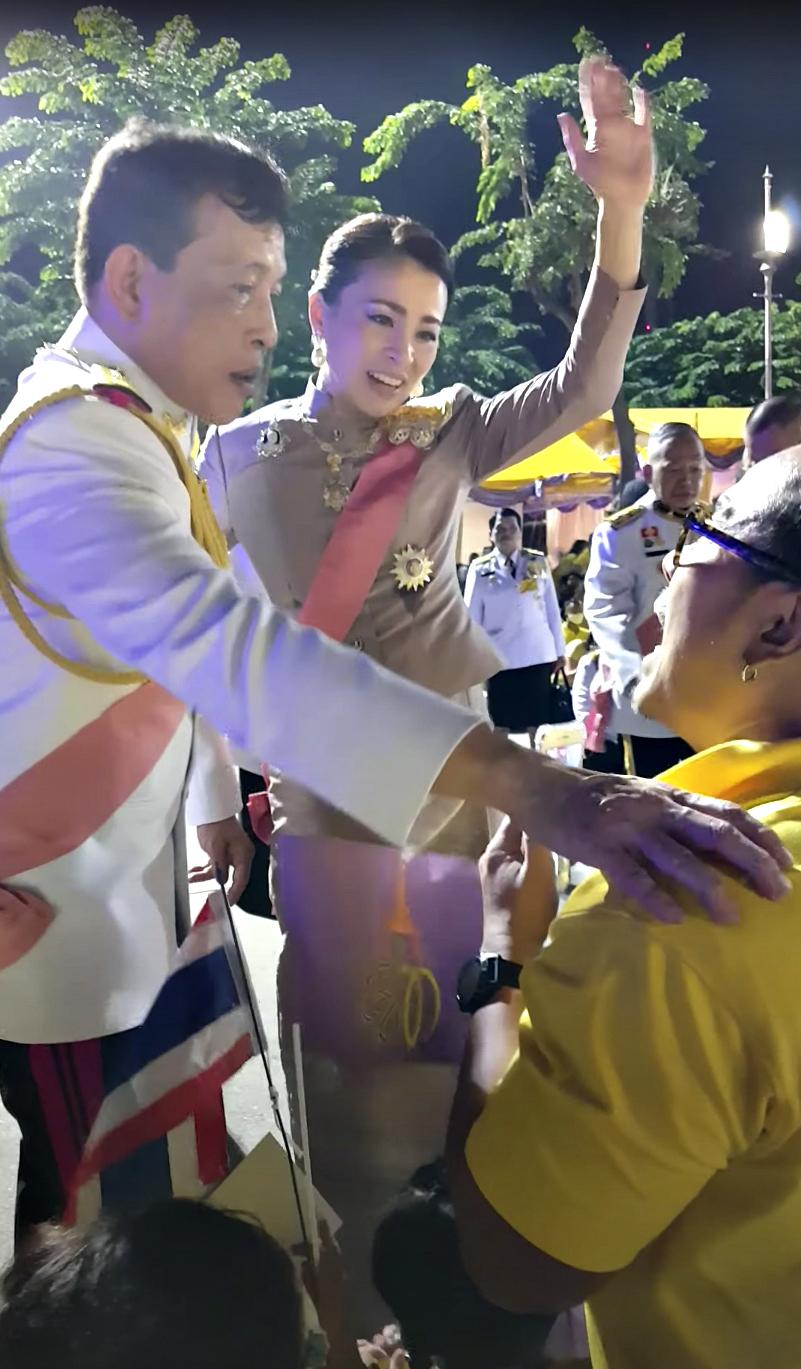 kind gesture: His Majesty the King thanks a man who held a large portrait of His Majesty King Bhumibol Adulyadej The Great and Her Majesty Queen Sirikit The Queen Mother above his head at the Central Pinklao mall on Wednesday (see picture on right). Her Majesty the Queen, meanwhile, waves to people as the couple visited the Grand Palace on Friday evening.

The King and Queen on Friday night presided over a religious ceremony marking the memorial anniversary of King Rama V at the Amarin Winitchai Throne Hall in the Grand Palace. They were accompanied by the King's daughters -- HRH Princess Bajrakitiyabha Narendiradebyavati and HRH Princess Sirivannavari Nariratana Rajakanya.

On their way back to the Amporn Sathan Residential Hall at Dusit Palace near the Royal Plaza, people wearing yellow -- the colour of the King's birthday -- lined the streets to pay their respects to the King and Queen while chanting "long live the King".

Their Majesties stopped a few times along the way, including in front of the First Army Area headquarters on Ratchadamnoen Nok Avenue, to greet their subjects. People who were overjoyed later shared video clips of their encounter with the monarch on social media.

One clip by Facebook user Thitiwat Tanagaroon showed the Queen pointing to a man and saying to the King: "This man held a [King Bhumibol] poster amid the [student] protesters. Thank you very much. I remember. Thank you so much."

The King then thanked him again and the man said it was the greatest moment of his life.

"We're so proud of what you've done," the Queen added. "Thank you so much."

The man made the news on Wednesday when he held a large portrait of King Bhumibol and the Queen Mother above his head at the Central Pinklao mall near a crowd of protesters from the Khana Ratsadorn movement, a pro-democracy group calling for monarchy reform.

Another video was posted on Facebook by a user using the handle Luang Pu Buddha Isara with "thank you" written in the description. The footage showed His Majesty touching the shoulder of a man in white twice before talking to him.

The man was Suvit Thongprasert, formerly known as Luang Pu Buddha Isara, a co-leader of the People's Democratic Reform Committee, a group that rallied against the Pheu Thai Party-led administration that was subsequently toppled by the 2014 military coup.

Mr Suvit had asked his supporters to join him in a show of force to protect the royal institution on Oct 14.

Another video uploaded on social media showed people changing their chant from "long live the King" to "keep fighting, King".

All of the clips have been widely shared, accompanied by the hashtags: #กล้ามากเก่งมากขอบใจ #ในหลวงสู้สู้ #23ตุลาวันตาสว่าง -- which were trending on Twitter. They roughly translate to "very brave, excellent, thank you very much"; "keep fighting, King"; and "October 23, enlightenment day".

Meanwhile, yellow-clad people turned up in droves to display their loyalty for the monarchy across many provinces yesterday.

In Prachuap Khiri Khan, more than 2,000 people rallied at the provincial hall in Muang district where they held up pictures of His Majesty the King and those of His Majesty King Bhumibol Adulyadej The Great.

Boonchu Jongrak, head of the kamnan and phuyaiban local leaders' club in the district, led the crowd in singing the national and royal anthems before the people joined a march around town.

In Phitsanulok, about 500 members of the province's kamnan and phuyaiban groups converged at the provincial hall. They vowed to protect the monarchy and raised a placard with "no nation without religion and the King" written on it.

In neighbouring Phichit, more than 2,000 people in yellow shirts waved flags to signify their allegiance to the monarchy.

Addressing the gathering, provincial governor Rangsan Tancharoen said people upheld the nation, religion and the monarchy and their faith in these pillar institutions will never waver.

In Nakhon Ratchasima, about 500 residents from 12 tambons assembled in Phimai district, led by Jaturong Thanomklang, a former district chief. They marched through the district centre and encouraged people to come out to protect the monarchy.

Also in Yala's Muang district, a similar mass gathering was held in which its leader, Chanon Jehama, said: "Those who oppose and express themselves against the monarchy have angered people who respect and are loyal to the institution."

Meanwhile, the government firmly recognises people's civil and political rights and is properly handling the protests, said the Ministry of Foreign Affairs.