24 arrested, hundreds of kilogrammes of crystal meth, heroin and other narcotics seized

Narcotics Suppression Bureau officers display drugs seized in eight cases, including 1,470kg of crystal meth and 431kg of heroin, at a briefing on Friday in Bangkok. (Supplied photo)

Police on Friday announced details of a series of recent drug arrests that resulted in the seizure of 1,470 kilogrammes of crystal methamphetamine, 670,000 speed pills, 431kg of heroin and other narcotics and assets worth over 8 million baht.

The operations were discussed at a media briefing held on Friday by the Narcotics Suppression Bureau (NSB). Information on when the arrests took place was not available.

In the largest case, NSB officers, working with US Drug Enforcement Administration (DEA) officials, arrested four men in Pluak Daeng district of Rayong and seized 1,031 bars of heroin, weighing 412kg, 500kg of crystal meth, six cars, six motorcycles, one gun, and deeds to four land plots from their rented house, said Pol Maj Gen Pornpitak Ruyuenyong, commander of the NSB sub-division 1. The assets were worth about 7 million baht, he added.

In the second case, NSB officers arrested Kesorn Dangkaesee, 47, and seized 500kg of crystal meth hidden in the back of his pickup truck in Tao Ngoi district of Sakon Nakhon province.

In the third case, three men were caught with 450kg of crystal methamphetamine, 51kg of ketamine, 590,000 speed pills and 4,000 ecstasy pills hidden in two pickup trucks in Thep Sathit district of Chaiyaphum. 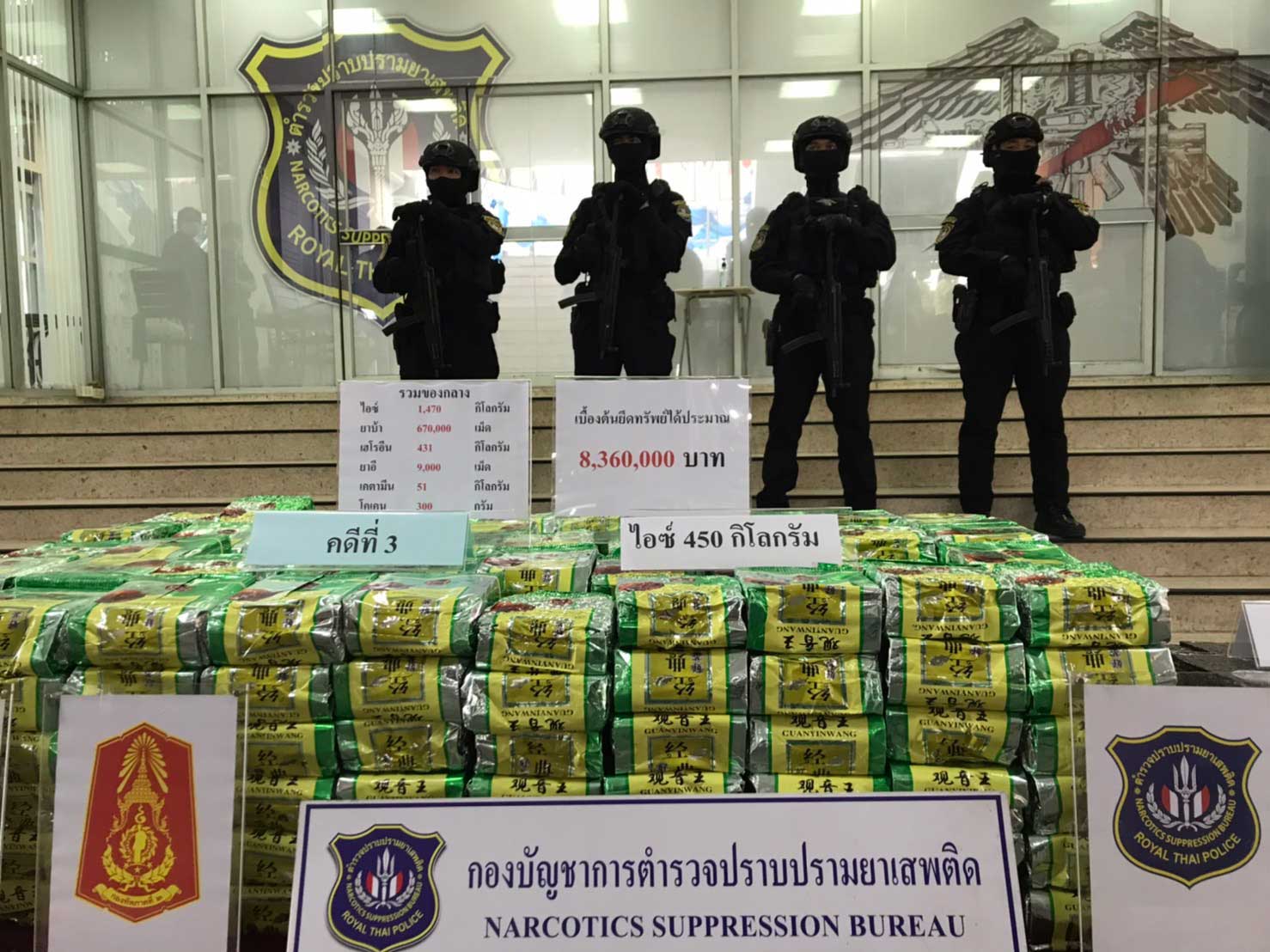 In the fourth case, police seized a parcel containing 1.5kg of heroin from a logistics firm in Bang Khae district of Bangkok. The heroin was destined for Australia, said Pol Maj Gen Banphot Muangchobklang, commander of NSB sub-division 3.

Officers later seized another parcel containing 6kg of crystal meth from another logistics firm in Bang Phlit, Samut Prakan. The drugs, destined for Australia, were hidden in a car bonnet. Another 10kg of heroin was found stuffed in cans of processed durian. The parcel containing the heroin was sent from Taiwan.

An NSB investigation led to the arrest of three men said to have been involved in sending the parcels: Anusorn Khwanrod, 28; Kamol Buathong, 33, and another man at a parcel delivery firm in Phatthalung province.

In the sixth case, three women — Thipaporn Termkrathok, 28; Patcharee Padsri, 29; and Nujaree Somsri, 28 — were caught in Saraburi with a parcel containing 300 grammes of cocaine. The drugs had been sent from South Africa.

In the seventh case, police arrested Khachorn Sae Wan, 36, and seized 4kg of crystal meth at Suvarnabhumi airport. Mr Khachorn, an overseas worker, was about to board a flight to Israel, said Pol Maj Gen Banphot.

In the eighth case, police arrested Somchai Panatheuk and six others with 80,000 speed pills and 4kg of crystal meth in Chumphon. Seized were 1.36 million baht worth of assets, said Pol Maj Gen Wutthipong Nawin, commander of NSB sub-division 4.