The good news is hermit crabs are everywhere on Moo Koh Lanta Marine National Park. The bad news is not all of them have homes.

Officials at the park off the southern mainland in Krabi asked for donations from the public for single shells for the crustaceans.

The message was uploaded on the national park's Facebook account on Wednesday and on Thursday alone the park in Koh Lanta district received pledges to donate at least 200 kilogrammes of the shells.

An official at the park said the number of hermit crabs is rapidly growing on the islands but there are not enough large shells for them to stay as they grow up.

Hermit crabs have to find new, bigger shells to fit their sizes. With more hermit crabs than shells, many are forced to live in leftover plastic items, glass bottles or caps.

The official, who requested anonymity as he was not authorised to speak to media, credited the clean environment to the vast number of hermit shells at the park. The official, however, dismissed as untrue a theory that the shortage was caused by tourists taking shells home.

"Some tourists might take shells home but that was not the underlying cause of the problem," the official said. "There are simply more hermit crabs than shells."

Although the use of bottles and caps shows how adaptable the crustacean are, the artificial homes could pose a danger for the population of hermit crabs. As they outgrow the shells, they tend to get stuck inside and could not find food, reported Massive Science, the media dedicated to scientific research, citing a study of the University of Tasmania. 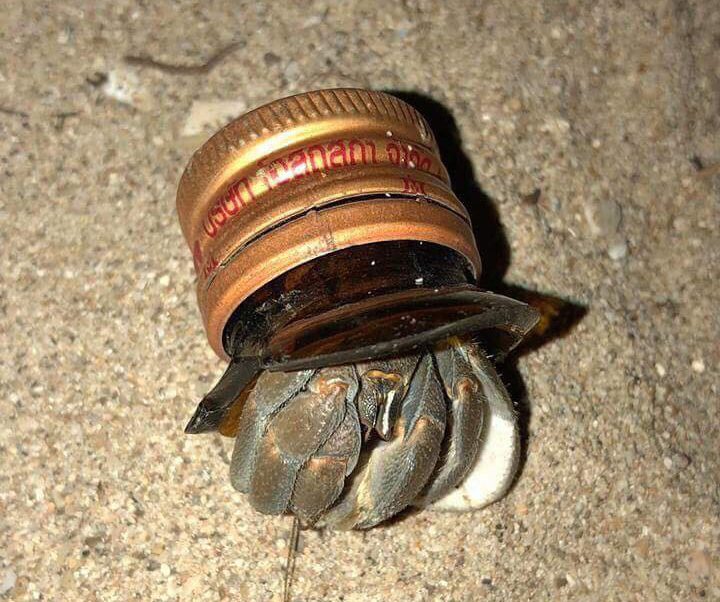 A hermit crab lives in a cap of an energy drink bottle. (Photo from O'pal Pancharatt Facebook account)

A Facebook account under the name of O'Pal Pancharatt posted the pictures of hermit crabs living in bottle caps of energy drink glass bottles in 2018 and the photos drew sympathy for the crustaceans. The account owner did not say where the photos were taken but the Seub Nakhasathien Foundation said it showed the degrading environment.

"It was not a miracle or an innovation. The post showed there was more debris on the beaches than shells," the foundation wrote in an article.

The problem of artificial shell homes for hermit crabs is found everywhere in the world and not limited to Moo Koh Lanta and other places in Thailand. National parks in the kingdom call on visitors not to leave  garbage behind when they go home.

"We still need more [shells]," said the same park official. "All donated items will be dropped on beaches for hermit crabs to choose as their new homes."