Hundreds of activists turn backs on Royal motorcade passing nearby

Protesters show the three-finger salute atop Democracy Monument after wrapping it with a banner during a rally for reform on Saturday evening. (Reuters Photo)

Three pro-democracy rally groups came together on Saturday to wrap Democracy Monument in a huge cloth banner bearing messages denouncing the government and calling for reform.

As vehicles carrying Their Majesties the King and Queen to a ceremony to inaugurate a new subway extension passed nearby, the demonstrators faced the other way, raised three-finger salutes and sang the national anthem.

As the evening wore on, speakers in front of the covered monument reiterated their demands for a new constitution, the resignation of Prime Minister Prayut Chan-o-cha and reform of the monarchy.

The charter was the main focus of their attention, as Parliament is scheduled to debate amendments on Tuesday and Wednesday. Seven bills, six of them drafted by political parties, are on the agenda but the youth-led movement wants lawmakers to adopt the one drafted by the civil group iLaw.

The three groups — Bad Students, Free Women and Mob Fest — are all allied with the Free Youth group, which marked its first anniversary on Saturday.

Bad Students, mostly high schoolers who have been pressing for educational reform, were the first to take to the streets, arriving at the Education Ministry shortly after noon.

They brought a framed photo of Education Minister Nataphol Teepsuwan attending a right-wing demonstration in 2014, small paper flowers, lamps and a coffin — items associated with a cremation — to stage a mock ceremony.

The cheerful youth mob, some of them dancing to tunes by the K-Pop idols Blackpink, were greeted by a securely locked gate reinforced with chained iron barriers.

The students then propped Mr Nataphol’s photo against the logo in front of the ministry building as they decried his failure to solve their problems.

They placed several gold stickers bearing an image of the Ratsadon plaque on the walls and a few small white ribbons on the ministry logo.

The group then set off to to join the Mob Fest nearby at around 1.50pm, carrying a 30-metre-square white cloth above their heads.

The cloth, it turned out, was the one that would be used to wrap Democracy Monument later in the day, after demonstrators had been invited to write messages on it.

“Children are often compared to a blank canvas and this canvas will be written at Democracy Monument to show young people and citizens want to write their future with their own hands,” one of the group’s co-leaders said.

“People’s wishes will be written on this fabric," she said.

Mob Fest gathered at Democracy Monument at 2pm. They also invited cabinet ministers, senators and MPs to come and listen to their problems.

The group, which describes itself as a flash mob demanding equality through creative means, asked people who joined them to drop a one-baht coin each in a box to keep track of the number of participants.

The request was made in response to claims by authorities that the protests have been losing steam with a drastic drop in numbers, according to one of the group’s Facebook posts.

Two kilometres away, thousands of royalists were waiting for the arrival of His Majesty the King at Sanam Chai MRT station near the Grand Palace, for a ceremony to inaugurate the Blue Line extension.

As the Royal motorcade passed close to the rally site, His Majesty was seen waving, but few of the demonstrators saw him because their backs were turned. (Story continues below) 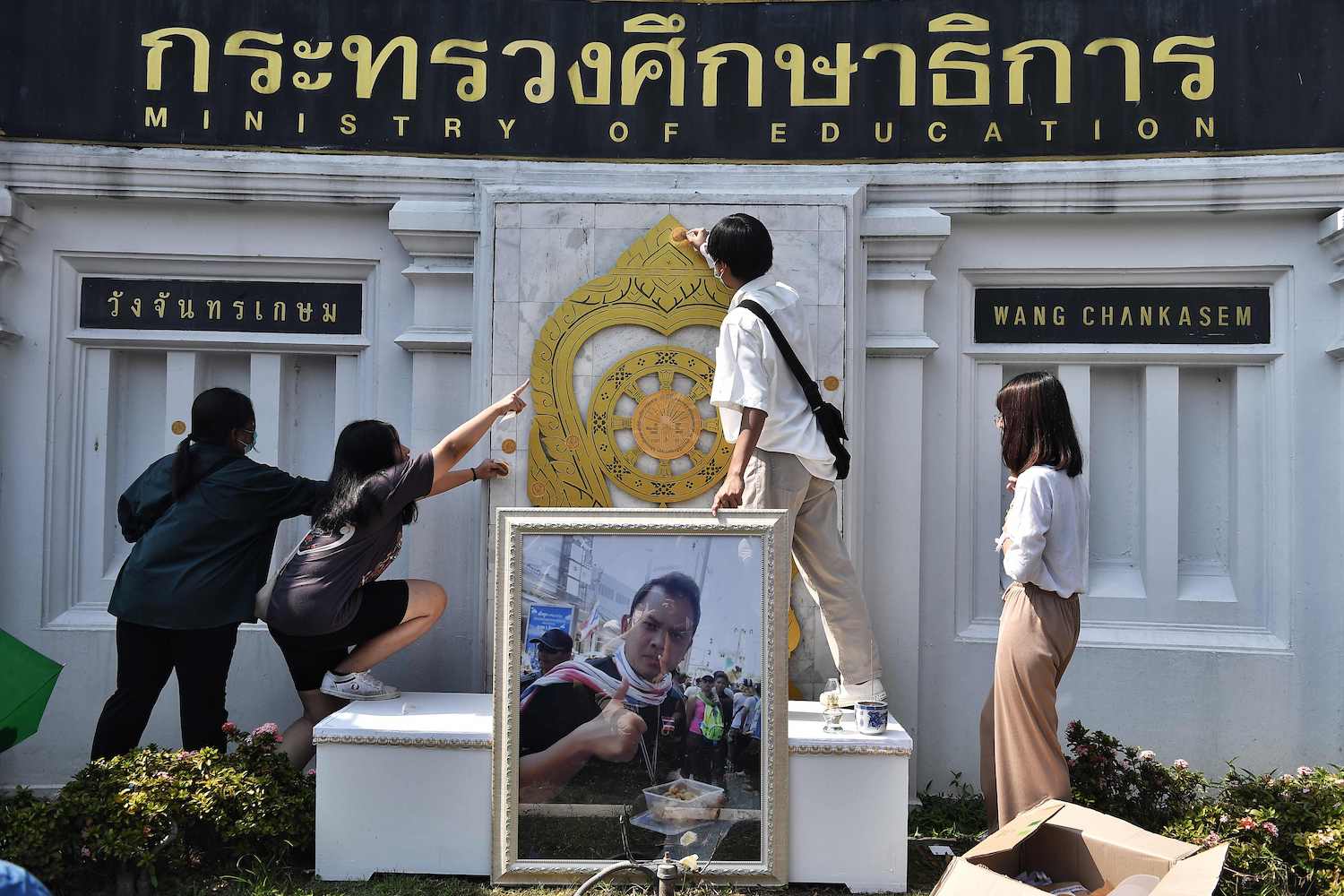 Young protesters place stickers on the Education Ministry building next to a portrait of Education Minister Nataphol Teepsuwan and other items assembled for a mock cremation ceremony on Saturday. The picture of the minister was taken in 2014, when he was a key figure in the People’s Democratic Reform Committee (PDRC) movement whose rallies against the elected government paved the way for the military coup in May of that year. (AFP Photo)

At Democracy Monument, Thai media reported that more than 5,000 police officers were on hand to keep the situation under control at strategic locations.

Many border patrol, plainclothes and female police  officers armed with batons and riot gear gathered at City Hall near the protest site. A group of yellow-shirted men with cropped hair — a giveaway of their military or police affiliation — also arrived in chartered buses.

Police were also seen filling water cannon trucks with tap water in front of Parliament. “It’s definitely clean,” said one of them.

The assurance came after reports that water used to disperse protesters near the Grand Palace on Nov 8 had a bad smell and was itchy. The water used earlier to disperse crowds near the Pathumwan intersection on Oct 16 was also laced with unknown chemicals and blue dye. Police later admitted to a parliamentary committee that the water had contained “a small amount” of tear gas.

To prevent the crowd from spreading, police blocked Si Yaek Kok Wua with BMTA air-conditioned buses, which are said to be harder to move than the old red “hot” buses they have used at past rallies. In any case, members of the BMTA union continue to speak out against the use of public buses in such highly politically charged circumstances.

Meanwhile, Rap Against Dictatorship debuted its new song Patiroop (Reform) on YouTube on Friday. The lyrics, with an English translation liberally sprinkled with the F-word, are about the need to rally and reform. By Saturday afternoon, it had attracted more than 1 million views.