Young “Bad Student” activists gathered on Saturday beneath the Siam BTS skytrain station, a day after it was revealed that two of their teenaged leaders were facing charges for taking part in protests.

The demonstrators sheltered under the skytrain platform in front of the Siam Paragon shopping centre after rain forced them to change the rally venue from the nearby Ratchaprasong intersection.

Police confirmed that organisers of the rally had informed them about their activity, which was given permission to go ahead. It was expected to end around 9pm.

As the day went on, the crowd of a few hundred grew to a few thousand, who settled in as a rally stage was set up for the evening’s entertainment and speeches.

“#Bye bye dinosaurs” was the theme of the event that was publicised on the Bad Student Facebook page.

“If parliament cast in the role of ‘dinosaur’ rejects and refuses changes, students like us will be the meteorite that collides with the backwardness of senior figures in society,” another message read. “As our calls for educational reforms are being ignored, see us at the Ratchaprasong intersection on Nov 21. Students will talk about all the things the dinosaurs don’t want to hear!”

In keeping with the theme, participants dressed in dinosaur costumes were being pelted by inflatable meteorites launched at them from the crowd.

But amid all the good-natured fun, there was a serious side to the participants’ presence.

“We are here to ask for the freedom that has been taken away from us as well as for reforms to education,” said high school student Mameaw, 18, who declined to give her full name. “We want a real constitutional monarchy.”

The protests that have been staged since July have three core demands: the removal of former Prime Minister Prayut Chan-o-cha, a new constitution and reforms to the monarchy.

But the high school students also seek greater freedom and fairer treatment within an education system that they say is archaic and aimed primarily at enforcing obedience. Many spoke of the importance of gender equality as well.

“I have been sexually abused by teachers. School is not a safe place,” said a placard held by one student who sat in uniform with her mouth taped shut in protest.

The Bad Student group has staged a number of protests, including two at the Education Ministry where they demanded the resignation of the minister, Nataphol Teepsuwan.

Volunteers from Amnesty International were seen handing out colour-coded wristbands to the student protesters on Saturday so that authorities can distinguish minors from adults in case police are planning any arrests.

Police confirmed on Friday that they would summon two teenaged leaders of the Bad Student group to answer charges of violating an emergency decree by taking part in an anti-government rally on Oct 15.

The summonses issued on Tuesday called on Benjamaporn “Ploy” Nivas, 15, and Lopnaphat “Min” Wangsit, 17, to report to Lumpini police on Nov 30. A police spokesman said the two would be questioned in the presence of their parents and a lawyer.

Not all of those in the crowd were students. One parent told AFP she was upset that families have to fork out extra money on tutoring because of the poor quality of teaching.

“I spend so much for my daughter’s tutoring fees and need to enrol her in a faraway school so that she could get a good education. It should not be like this,” said Supaporn Pratumrat, 41, who attended the rally with her daughter. 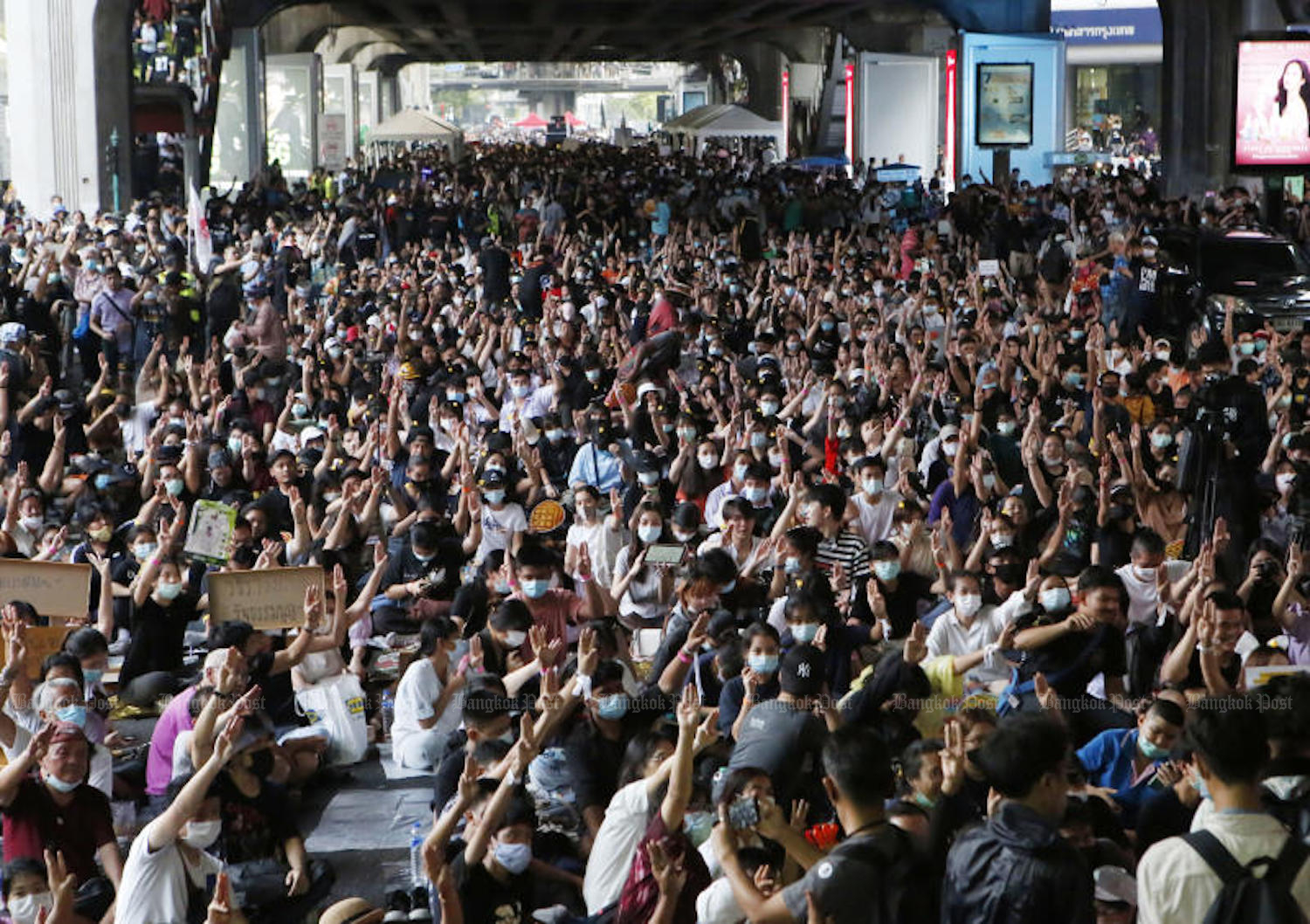 A large crowd settles in for the evening’s entertainment beneath the Siam BTS station on Saturday. (Apichit Jinakul) 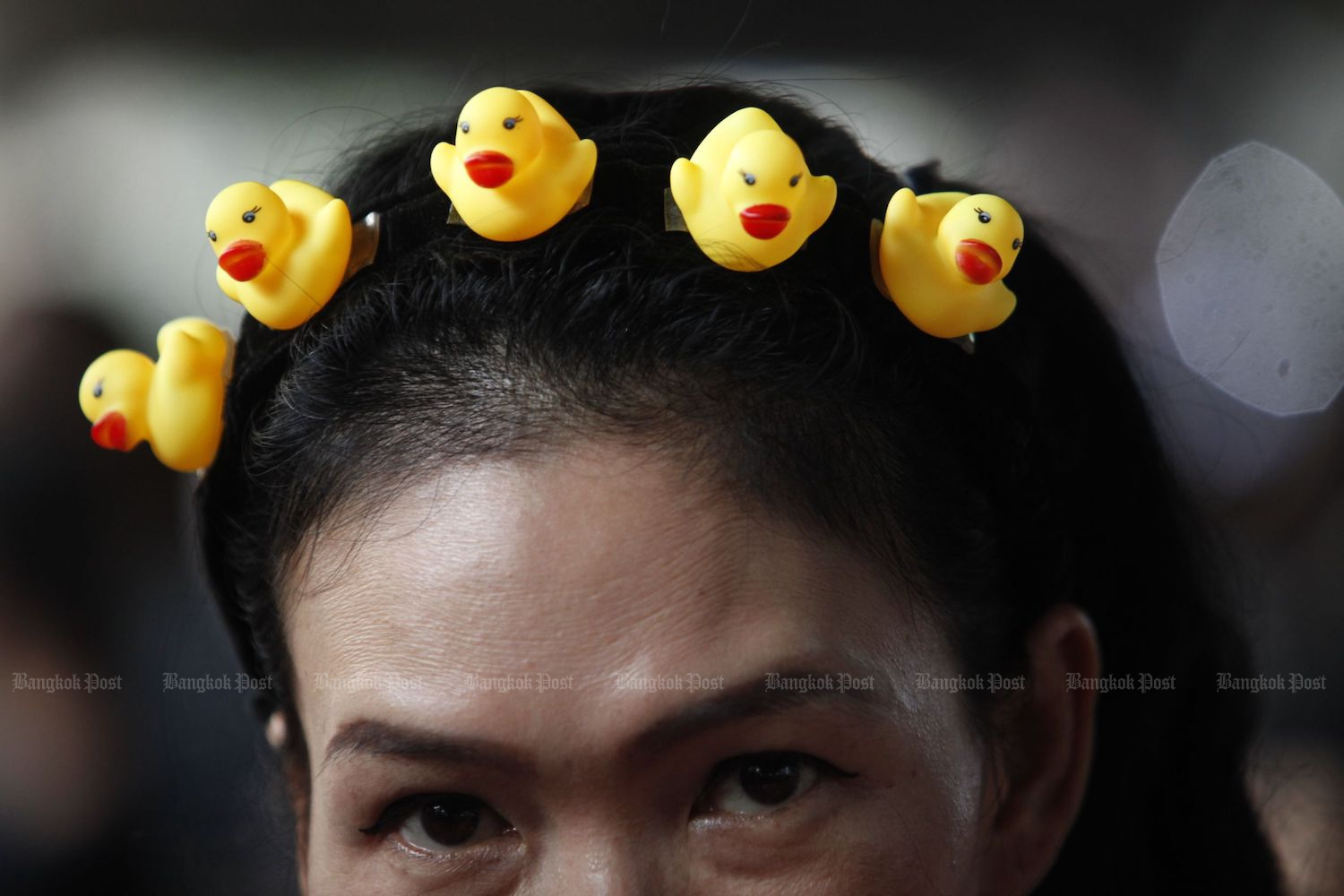 A young demonstrator sports a rubber-duck headband, the latest fashion statement among protesters, who used giant inflatable ducks on Tuesday to shield themselves from police water cannon and tear gas. (Photo: Wichan Charoenkiatpakul) 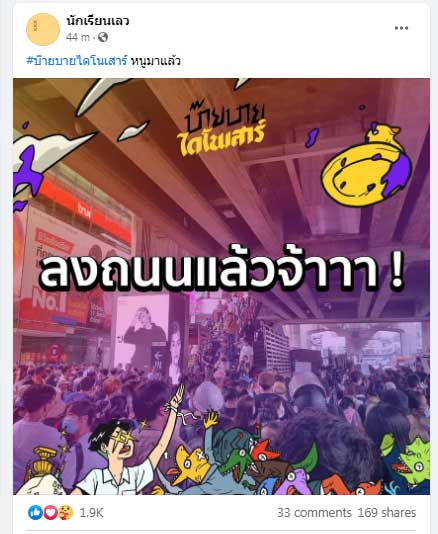