Thanathorn reports to police to hear charges filed by EC

Thanathorn Juangroongruangkit, former leader of the disbanded future forward party, is greeted by supporters as he reports to Metropolitan Police Bureau sub-division 2 in Don Muang on Tuesday. A woman behind him holds a paper sign with a drawing of a heart and the message, "Want a prime minister named Thanathorn". (Photo: Nutthawat Wicheanbut)

The EC filed a complaint against him with Thung Song Hong police, accusing him of wrongfully registering as a candidate knowing he was not qualified under Section 151 of the 2018 MP Election Act.

The move followed the Constitutional Court's decision disqualifying him from parliament on Nov 20 last year, ruling he still held shares in V-Luck Media Co Ltd on Feb 6, the date the party submitted to the EC the names of its party-list candidates for the general election. Mr Thanathorn was at the top of the list.

In March, the EC resolved to take criminal action against the auto-parts tycoon. The penalties for the offence are a jail term from 1-10 years, a fine from 20,000 to 200,000 baht and a ban from politics for 20 years.

A group of 20-30 yellow-shirts waiting in front of the police station played the old ultra-nationalist song "Nak Phaendin (Burden on the Land)" and held up paper signs scolding him.

Police were on duty outside the police station to ensure peace and order.

One yellow-shirt demonstrator claimed members of the Progressive Movement team present at the police station carried black and red shortwave radios. He questioned whether they had permits to use them and wanted police to investigate. (continues below)

Mr Thanathorn told reporters he was answerig a police summons for him to hear the charges the EC filed against him. He denied the charges and insisted in his innocence.

He said he was in good spirits even though there were many cases filed against him, and attempts by certain groups of people to oppress his rights and freedom of travel. He would concentrate on his job and not be shaken by intimidation.

He mentioned the Constitutional Court’s ruling acquitting government MPs of also holding shares in media companies, particularly the case of Pada Vorakanon, a Palang Pracharath MP for Bangkok. She was not found guilty of a media shareholding. She had testified that the media firm she held shares in was already closed down.

Mr Thanathorn said his media business had also been closed. Intention should be taken into consideration in the matter. He said he had proof of the sale of his media shares.

On the anti-government rally planned for Wednesday, Mr Thanathorn asked police and the government to be tolerant and listen to what students and other people had to say.

Those demonstrators chose to gather at the Crown Property Bureau because their demands were being ignored. A draft of charter amendment proposed by iLaw and supported by many people was rejected by the joint sitting of parliament, he said.

iLaw, or Internet Law Reform Dialogue, confirmed that its "people's draft" had not passed the the first reading last Wednesday, after overwhelming rejection by members of the appointed Senate, whose power it would limit.

Mr Thanathorn said he did not expect any untoward incidents during the planned rally on Wednesday. He also did not believed the conservative group had the social resources to stage a coup.

Asked about use of Section 112 of the Criminal Code, the controversial lese majesty law, he said using it against people who had different views would be like throwing petrol on a bonfire. This was not the right time to crack down on demonstrators.

If those in power thought he was pulling the strings behind anti-government protests they were wrong, he said.The government needed to open its mind and accept the truth in a mature manner, he said

Mr Thanathorn said he spent most of his time helping candidates of the Progressive Movement with their campaigns for the approaching provincial elections. If time permitted, he would join in the rally, as on previous occasions.

He was greeted by supporters with a cardboard box containing an orange balloon, the colour of the disbanded FFP and the Progressive Movement, and a birthday cake. Mr Thanathorn turns 42 on Wednesday, Nov 25. 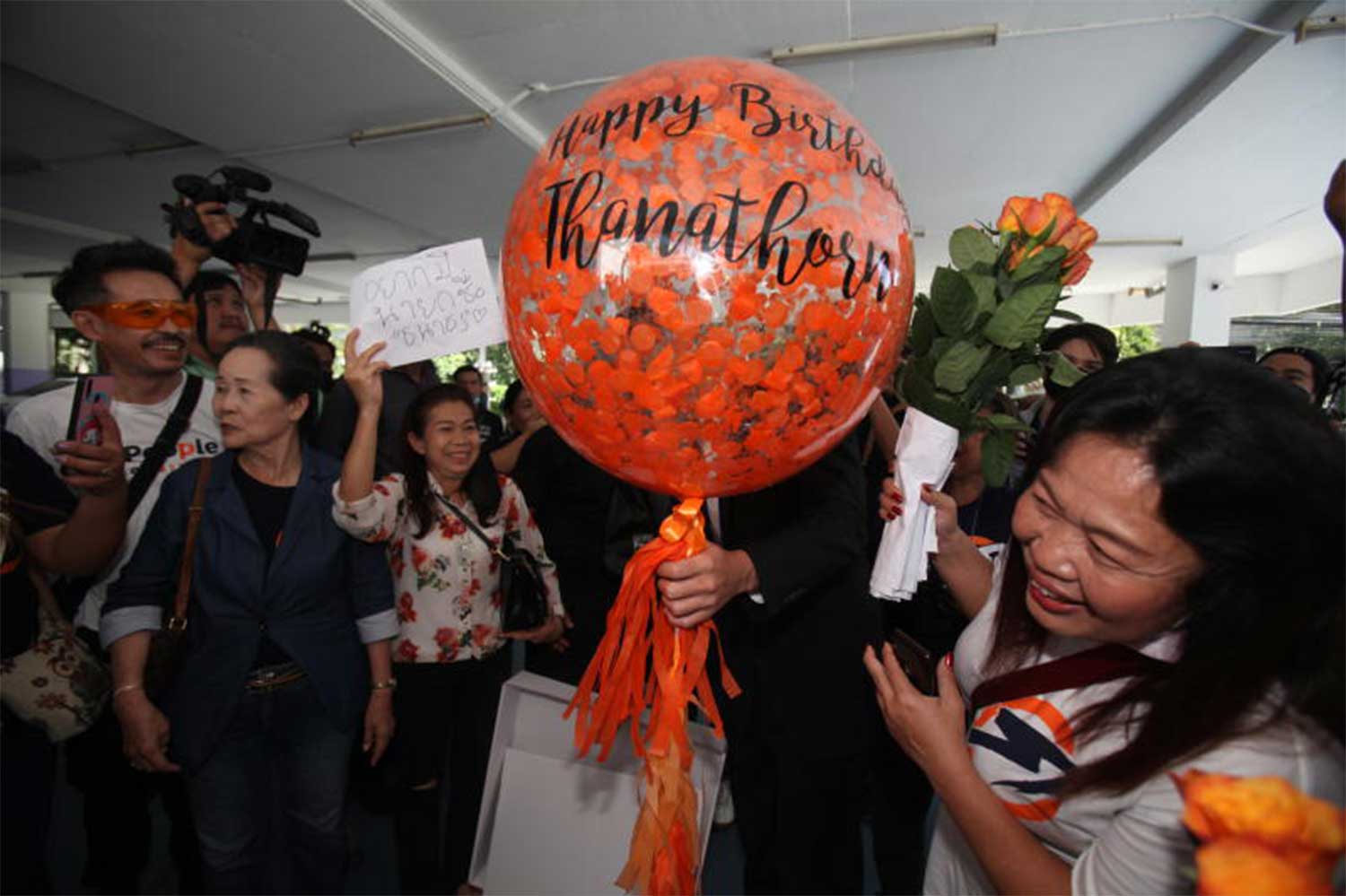