His Majesty the King paid tribute to King Rama IX's contribution in laying the foundations of the country's progress as he led Thais in lighting candles at Sanam Luang to mark the birthday of His Majesty King Bhumibol Adulyadej The Great and National Father's Day yesterday.

It was the first time Their Majesties the King and Queen presided over the annual ceremony and joined Thais in lighting candles for the occasion. Other members of the royal family were also present.

In an address to a gathering of cabinet ministers, government officials, armed forces leaders and the public at Sanam Luang, His Majesty said he was glad to join a candle-lighting ceremony marking King Rama IX's birthday in the presence of people from all walks of life. 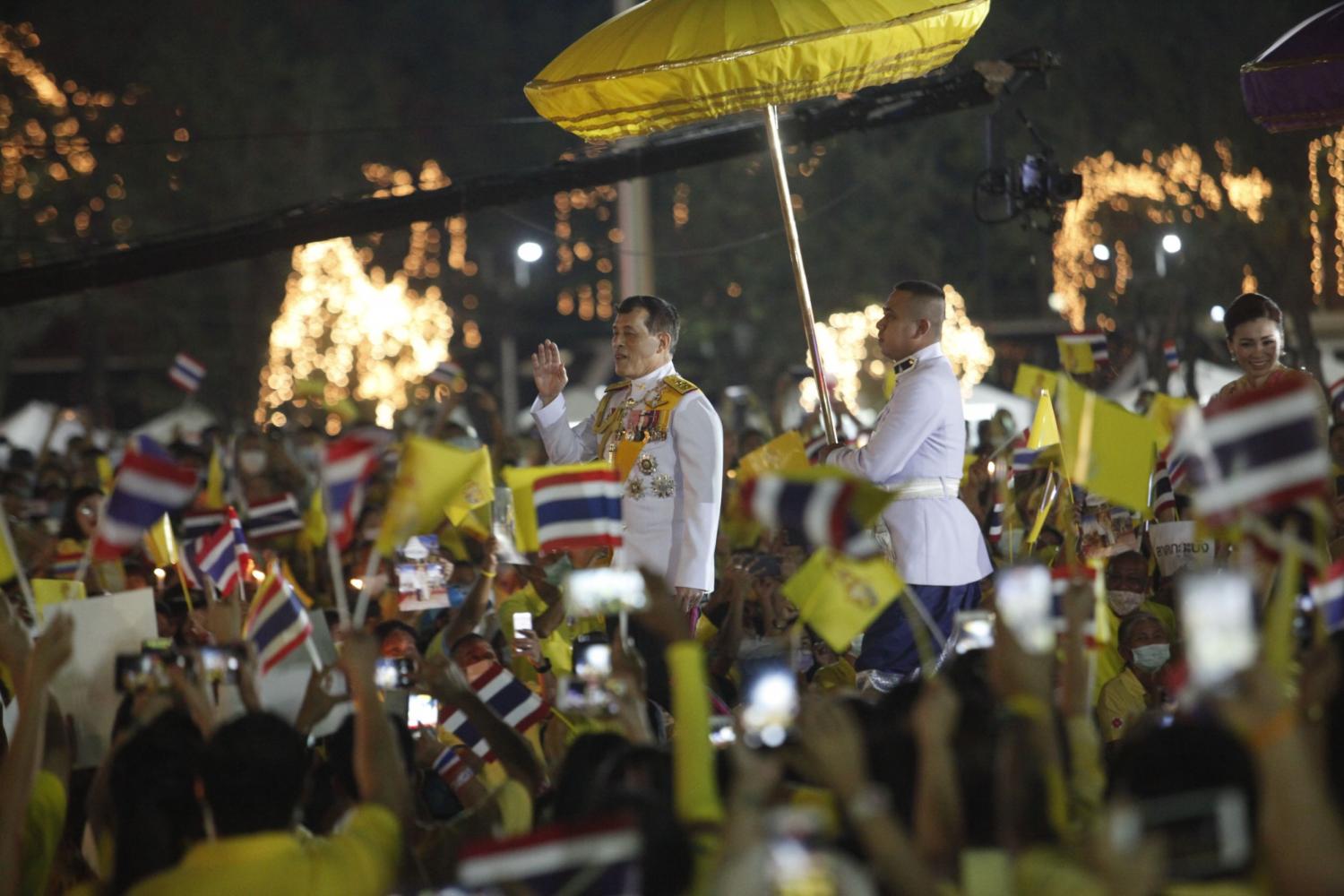 Tributes flow: Their Majesties the King and the Queen meet people at Sanam Luang last night while walking to a stage to preside over a candle lighting ceremony in remembrance of His Majesty King Bhumibol Adulyadej The Great.

''His Majesty King Bhumibol Adulyadej The Great persevered with his tasks for the benefit of the country and people during the 70 years of his reign. It is clear that he laid the foundations for the nation's sustainable development and people's livelihood by promoting education, medical services and public health, as well as management of natural resources and the environment,'' the King said.

"He also offered the sufficiency economy principle which stresses moderation, prudence, and reasonableness, with accurate knowledge as a tool and moral virtues as guidelines,'' the King said.

''This provides everyone with a secure foundation which they can build upon for further progress and to cope with global changes, which helps Thailand remain strong. For this reason, Thais have always upheld and respected him as the Father of the Nation, and regarded his birthday on Dec 5 as National Father's Day and Thai National Day,'' His Majesty said referring to his father King Rama IX.

Earlier yesterday, His Majesty the King presided over a royal merit-making ceremony for the late King in the Grand Palace. 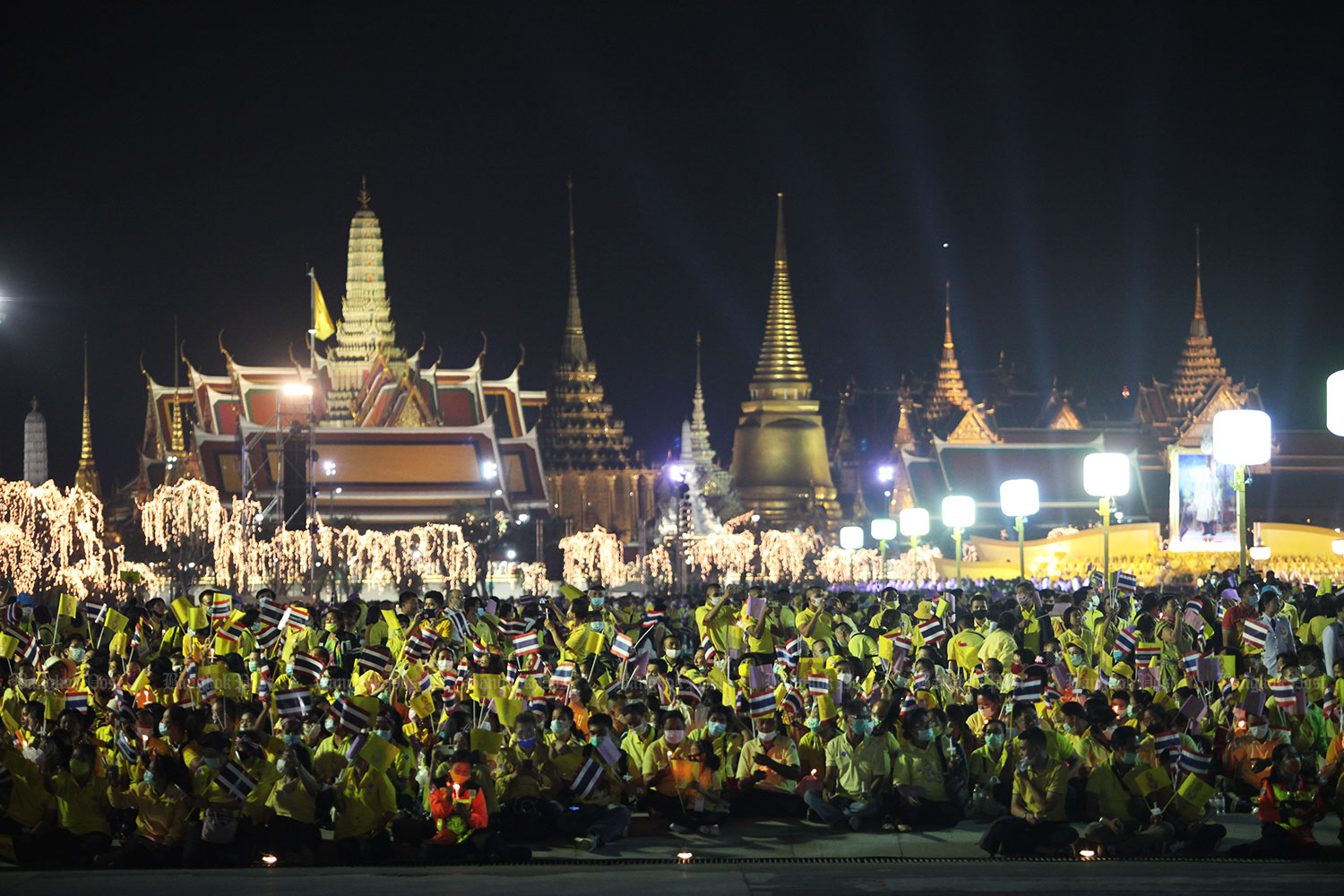 A sea of royalists clad in yellow-shirts gather at Sanam Luang ground to pay tribute on King Rama IX’s birthday. They waited since morning to attend the ceremony and candle-lighting and shows which started at 7.19pm. (Photo by Apichart Jinakul) 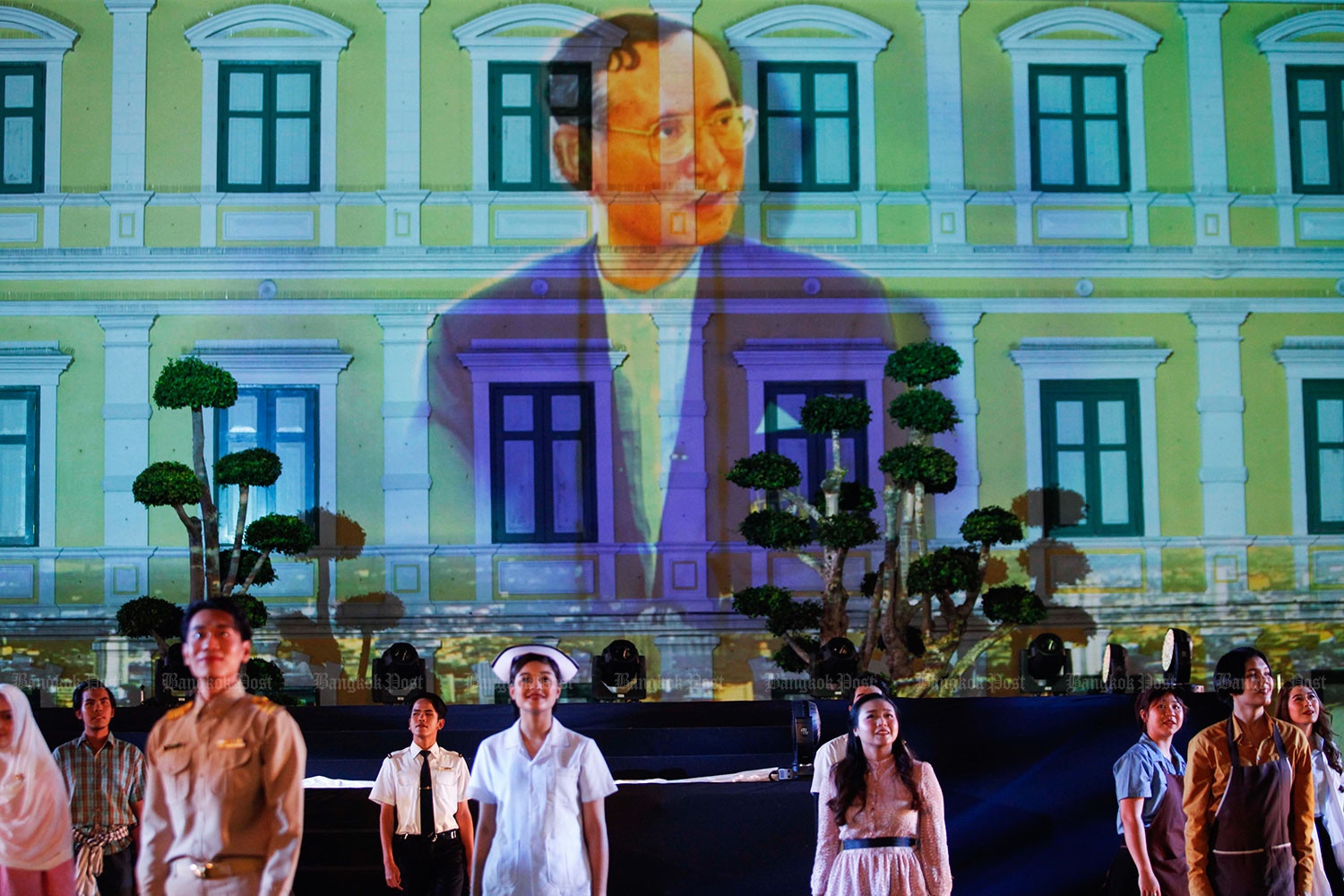 A multi-media show is displayed at Sanam Chai Road. (Photo by Pattarapong Chatpattarasill)

Thousands of yellow-clad people gathered at Sanam Luang yesterday to greet Their Majesties and attend the candle-lighting ceremony in the evening. Checkpoints were set up around Sanam Luang to screen people entering the ceremonial ground. Medical aid was available to people while royally-sponsored kitchens were also set up to provide food to them.

The Royal Household Bureau also granted the public permission to enter the Royal Pantheon in the Grand Palace and pay homage to the statues of previous kings which are enshrined there.

Holding a portrait of King Bhumibol Adulyadej in his hands, Somchai Yangyen, 69, from Bang Sue district, said he came to Sanam Luang because he wanted to pay respects to the late King.

''No one has done so much to improve the livelihood of people as King Bhumibol. He initiated several development projects that have greatly benefited the country,'' he said. 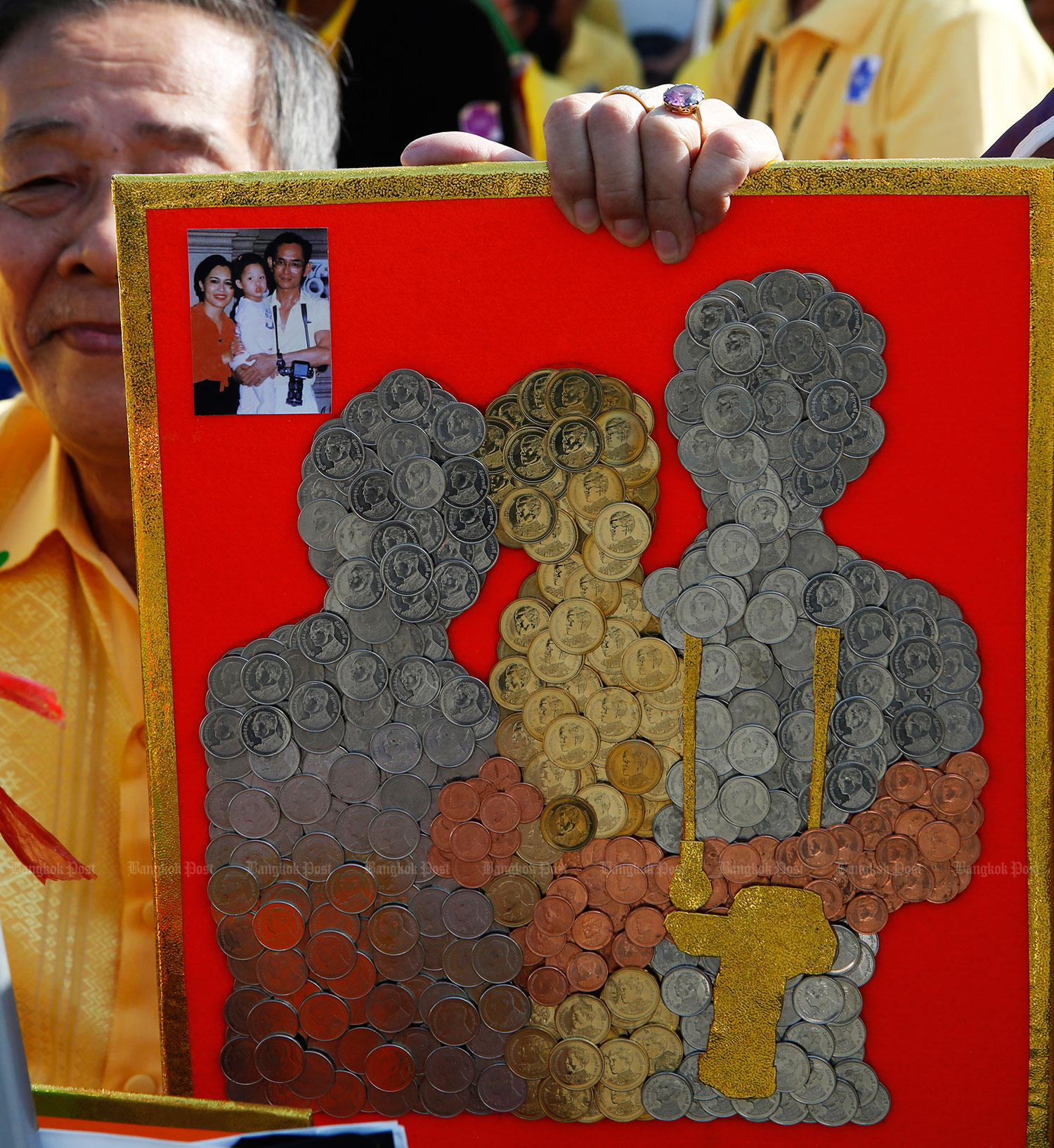 Art of the late king, Her Majesty Queen Sirikit The Queen Mother and Princess Bajrakitiyabha Narendiradebyavati. (Photo by Apichit Jinakul) 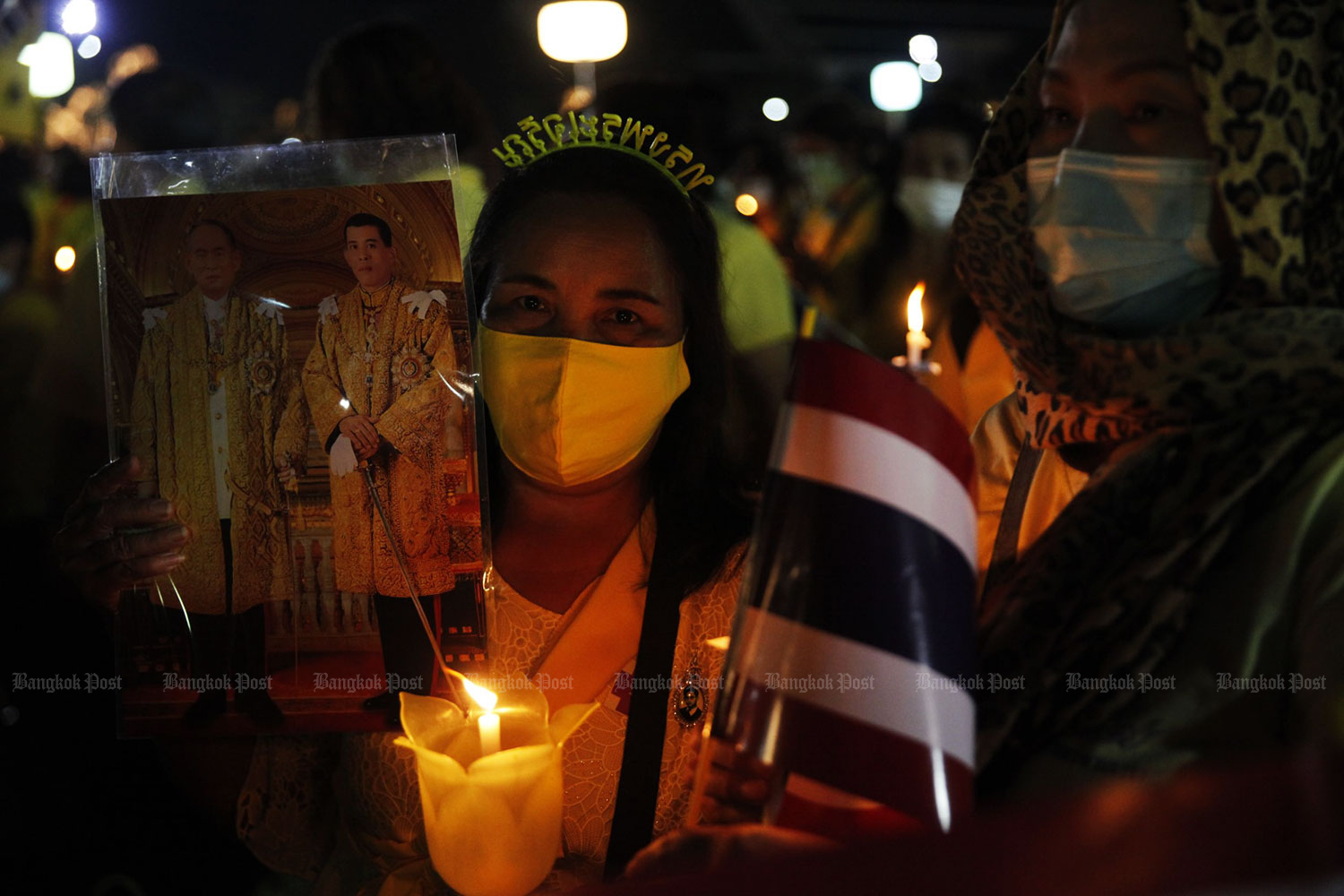 ''I believe that if students and young people have the opportunity to learn about the late King's work, they will love him as much as I do,'' Mr Somchai said.

Lamthan Chokdee, 73, said she took a bus from Nakhon Ratchasima with the intention to participate in the ceremony at Sanam Luang.

''I saw King Rama IX do good deeds for the country for so many years so I wanted to come here to express my thanks and also remember him. I want to let him know that Thais will never forget him. He will always remain in our hearts,'' she said.

Somjit Bangchan, 45, from Nonthaburi, said King Bhumibol was a great role model and Thais should follow in his footsteps. ''We should follow the fine example he set, such as applying the sufficiency economy philosophy to lives.

''Whenever I feel disheartened, I seek inspiration from the King's hard work, which motivates me to carry on,'' Mr Somjit said. 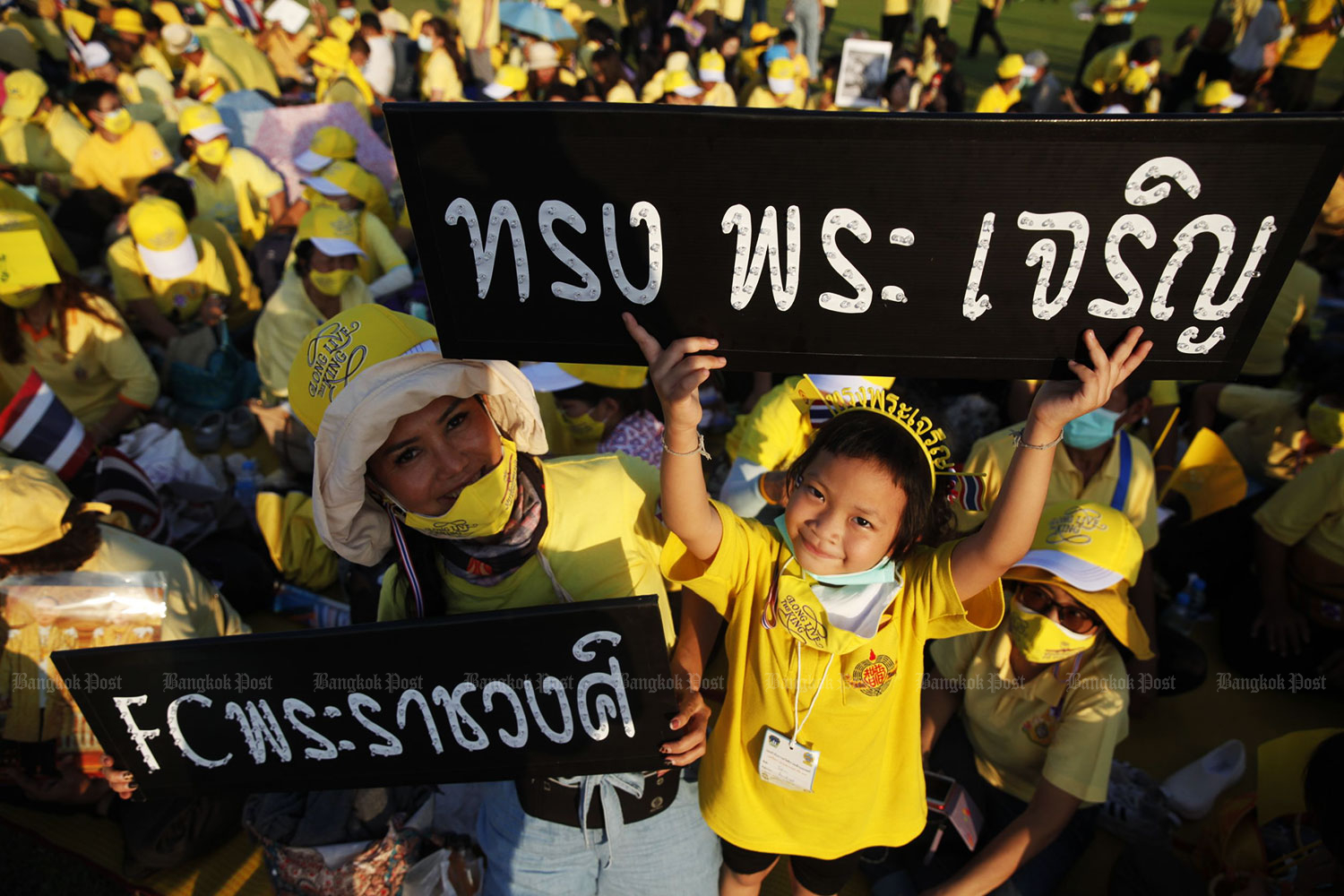 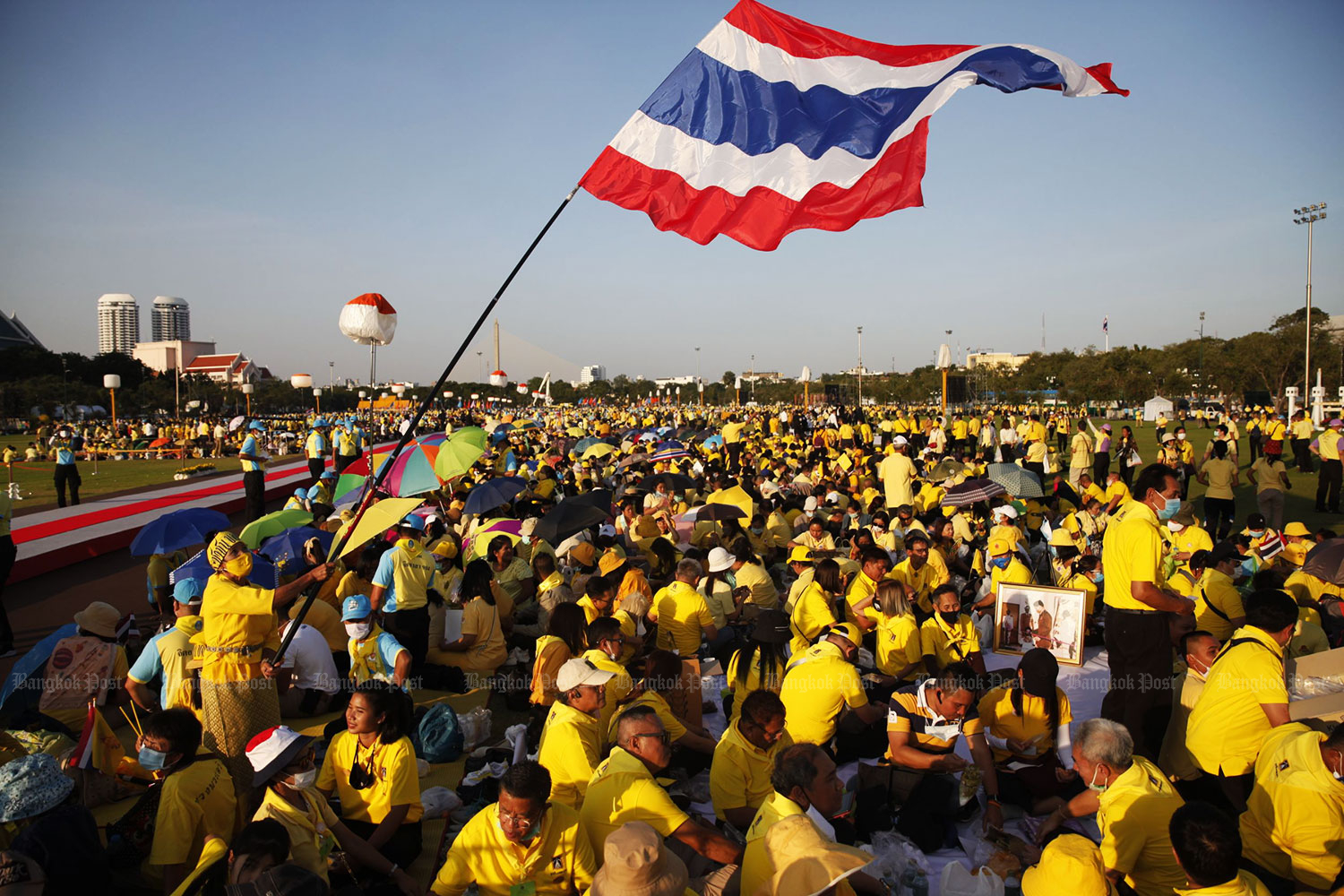 Royalists wait at Sanam Luang ground in the morning to attend the ceremony at 7.19pm and wave the national flag to express their love for the nation and loyalty to the monarchy. (Photo by Wichan Charoenkiatpakul)