Safer boxing: Staff use disinfectant sprays to clean the arena at the Ratchadamnoen boxing ring in Bangkok yesterday. Spectators watching the match are also spaced apart in keeping with social distancing rules. Public health safety measures have been stepped up in recent days after the resurgence of Covid-19 in some provinces triggered by imported infections through Chiang Rai. (Photos by Varuth Hirunyatheb)

The Interior Ministry will seek cabinet approval for a proposal to extend visa exemption for foreign tourists from 56 countries from 30 to 45 days in a bid to attract more tourist arrivals to revive the economy battered by Covid-19. 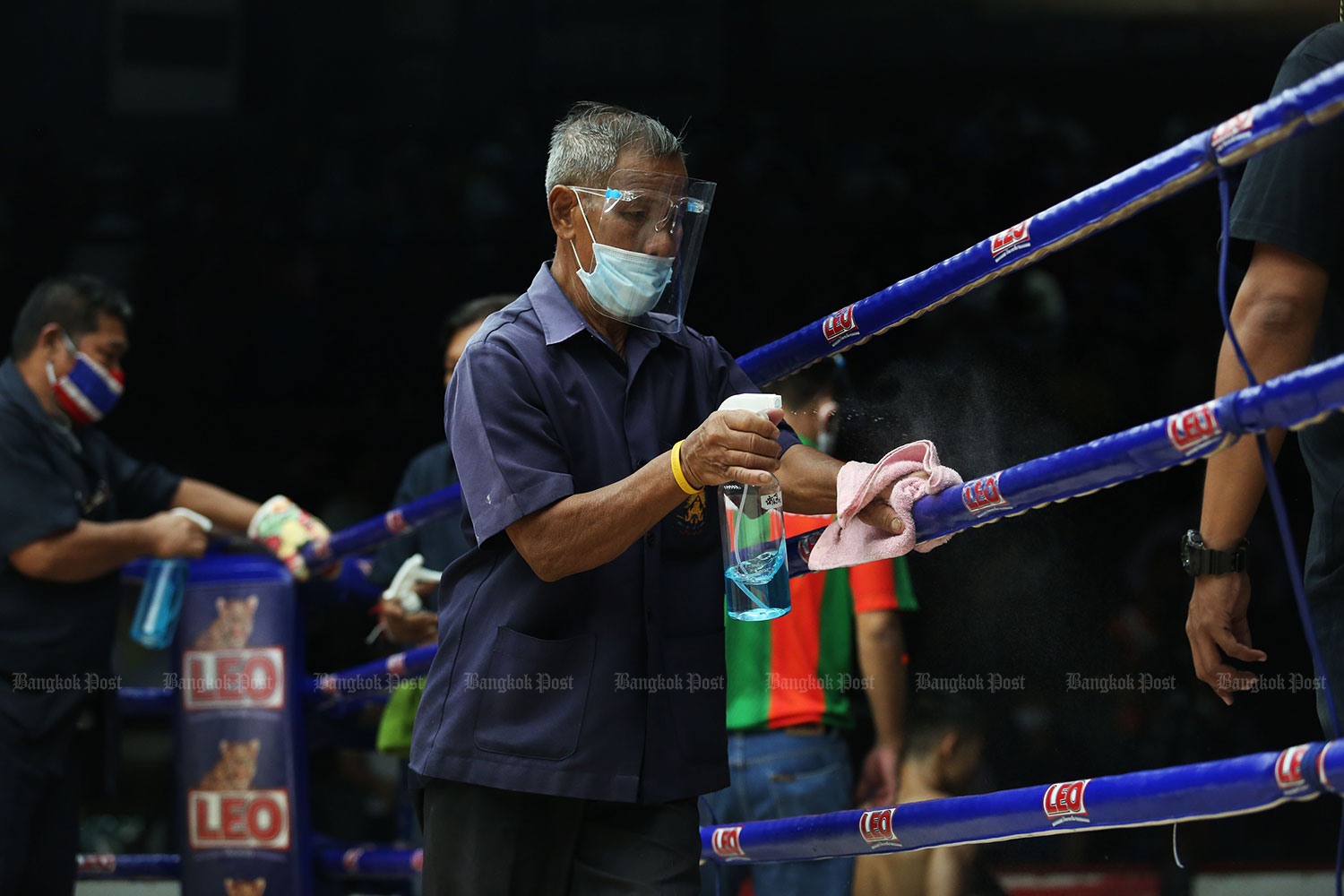 Tanee Sangrat, spokesman for the Foreign Affairs Ministry, on Wednesday said Prime Minister Prayut Chan-o-cha had instructed the ministry recently to expedite the relaxation of restrictions on foreigners entering Thailand.

The ministry raised the matter at a meeting on Monday of the Centre for Covid-19 Situation Administration's (CCSA) panel on the easing of Covid-19 restrictions, Mr Tanee said.

It was agreed at the meeting that visa exemptions will be granted to foreign tourists from three groups of countries. The first group comprises 56 countries and territories which are allowed under a visa exemption scheme to stay for 30 days, he said.

The second group comprises six countries and territories which have bilateral agreements with Thailand to stay for no more 30 days. They are Hong Kong, Laos, Macau, Mongolia, Russia and Vietnam.

The third group comprises four countries -- Argentina, Brazil, Chile, and Peru -- which have bilateral agreements with Thailand and are allowed to stay for no more than 90 days.

However, visa exemptions will still not be granted to visitors from Myanmar and Cambodia, even though they have bilateral agreements with Thailand, Mr Tanee said.

Since the 14-day-quarantine requirement remains in place, visa on arrival will be suspended until Dec 30, he said.

However, the meeting had asked the ministry to issue an announcement of a visa exemption extension from 30 to 45 days for the group of 56 countries first and the proposed extension will take effect until Sept 30 next year, Mr Tanee said.

The Interior Ministry has promised to present the matter for cabinet approval, he said.

Meanwhile, three more Thai returnees from entertainment places in Myanmar's border town of Tachileik were confirmed infected with the coronavirus yesterday, raising the total number of Covid-19 cases in the northernmost province to 37.

Chiang Rai governor Prachon Pratsakul said two were women, aged 28 and 29, and the other a 33-year-old man.

The women entered quarantine last Friday, and the man did the same on Sunday.

Mr Prachon said no one had been in close contact with them. They were admitted to Chiangrai Prachanukroh Hospital.

The new cases in Chiang Rai were not included in yesterday's daily national tally of 18 new cases.

Health authorities said the 1G1-7 Hotel and entertainment complex in Tachileik, an infection hotspot, was closed on Nov 24 and hundreds of Thais who worked there had to return home.

Many of them sneaked back across the border to Chiang Rai, dodging quarantine, and some travelled to other provinces.

Public Health Minister Anutin Charnvirakul has condemned them as being irresponsible and causing a public scare.

CCSA spokesman Taweesilp Visanuyothin said a new locally transmitted Covid-19 infection had been reported: A 29-year-old nurse at BNH Hospital. This raised the number of infected nurses in Bangkok to six.

Health officials had tested 851 people close to them, and all 745 results so far were negative, Dr Taweesilp said.

He said the first of the six was infected after failing to wear her protective gear properly while handling arrivals at an alternative state quarantine facility. Dr Sopon Iamsirithaworn, director of the division of communicable diseases, said the BNH Hospital had tested its personnel and found no other case. A total of 17 patients have arrived from 10 countries, the CCSA reported.

E-marketplace JD Central has announced it will end its operations in Thailand from March 3.