Around 2,000 Myanmar migrant workers wait in front of a dormitory near the Thai Union Market in Samut Sakhon. Health officials are testing thousands of Thai vendors and Myanmar workers linked to a cluster of infections at the Central Shrimp Market. (Photo by Arnun Chonmahatrakool)

The Public Health Ministry has reassured that it is able to contain the new outbreak of the novel coronavirus that originated in a seafood market in Samut Sakhon within two to four weeks, despite new cases surging to almost 700 as of on Sunday.

Opas Karnkawinpong, director-general of the Department of Disease Control, said on Sunday that the number of cases linked to Talad Klang Kung, or the Central Shrimp Market, surged to 689 from Saturday's tally of 548, as authorities conducted tests on 1,443 people yesterday.

The other 32 were patients who sought treatment at hospitals and detected by contact tracing. These include two patients in Bangkok who went to the market to buy seafood, he said.

The outbreak from the market has also spilled over into other provinces, Dr Opas said.

Three patients have been found in Samut Prakan and two in Nakhon Pathom. "All can be traced back to the Central Shrimp Market," Dr Opas said.

He pointed out that more cases are expected in the coming days as more tests are being conducted on workers at the Central Shrimp Market. "Don't worry. The sooner the infections are detected, the quicker the outbreak can be controlled," Dr Opas said.

He said the outbreak is still limited at the Central Shrimp Market and nearby dormitories, which have now been sealed off to prevent people from leaving or entering the areas.

More than 2,000 people were tested over the past two days and authorities will test 2,000 more people, Dr Opas said, adding no additional infections have been found in other areas.

The Central Shrimp Market is one of the largest shrimp wholesale markets in the country, where wholesalers and retailers from other provinces converge.

The market mainly employs workers from Myanmar, with only 10% of the labour force there being Thais, according to the Public Health Ministry.

The first case was a Thai woman who owns a stall at the market. She fell ill on Dec 13 and tested positive for Covid-19 on Dec 17.

Kiatiphum Wongrajit, permanent secretary for public health, said health officials are confident that the outbreak had originated in the Myanmar migrant workers community at the market.

As such, the ministry has decided to expand testing to cover as many Myanmar workers in Samut Sakhon as possible, he said, adding that officials now have the information of all those who bought seafood at the market and where they went afterwards. 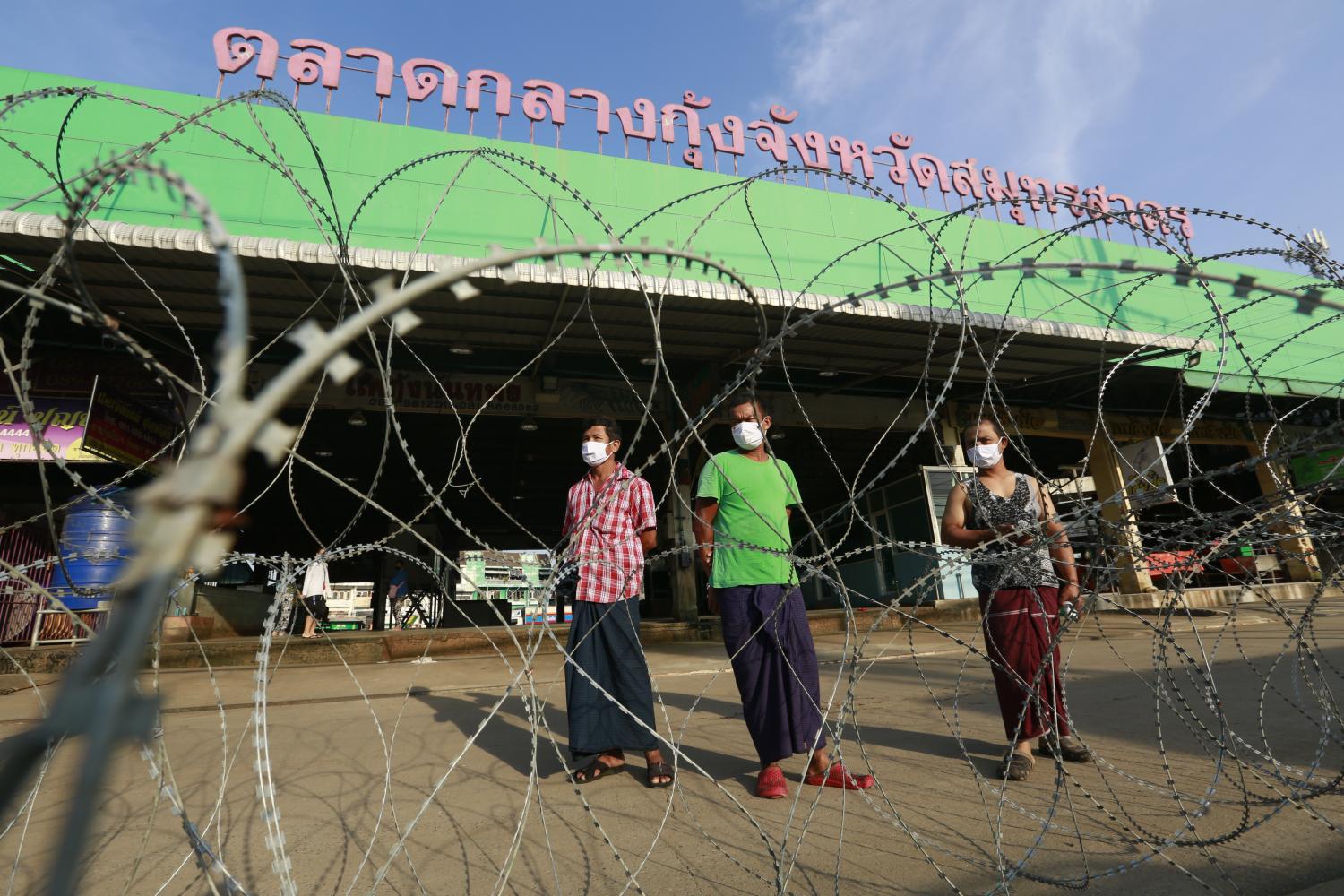 Migrant workers from Myanmar stand yesterday behind razor wire blocking the entrance to the Central Shrimp Market in Muang district of Samut Sakhon.

Dr Kiatiphum said the ministry expected the situation to return to normal within four weeks, provided that the transmission rate remains under control.

He went on to say that the ministry is confident that the outbreak in the market won't spread across the country.

"The chance of the virus spreading to Thais is limited because Myanmar workers tend to stay within their community and usually don't travel far from where they live," he said.

Dr Aekaphob Phienpiset, a Chiang Rai MP from the opposition Kao Klai Party, who sits on a House panel on public health, yesterday blamed the ministries of Interior and Labour as well as security agencies for the outbreak for failing to do their duty until many migrant workers had illegally entered the kingdom via natural channels.

Speaking after the meeting, City Hall spokesman Pol Capt Pongsakorn Kwanmuang said that the private sector has been asked to cancel New Year festivities. But if they must proceed, they must seek permission from the health department, and present their disease control plans, he said.