A festive New Year overhead greeting is seen near the busy Ratchaprasong intersection Thursday evening. The intersection is illuminated by light decorations to celebrate Christmas and herald in the New Year. (Photo by Varuth Hirunyatheb)

Public New Year celebrations and crowded events have been prohibited in Bangkok and many provinces.

The decision was announced by the Centre for Covid-19 Situation Administration (CCSA) on Thursday as it announced a colour-coding system to identify which areas were most vulnerable to Covid-19 outbreaks.

Bangkok has been declared an "orange zone" -- and thus subject to strict measures. However, it has escaped a total lockdown.

Red, orange, yellow and green are used to illustrate the degree of Covid-19 infection in provinces affected by the disease. 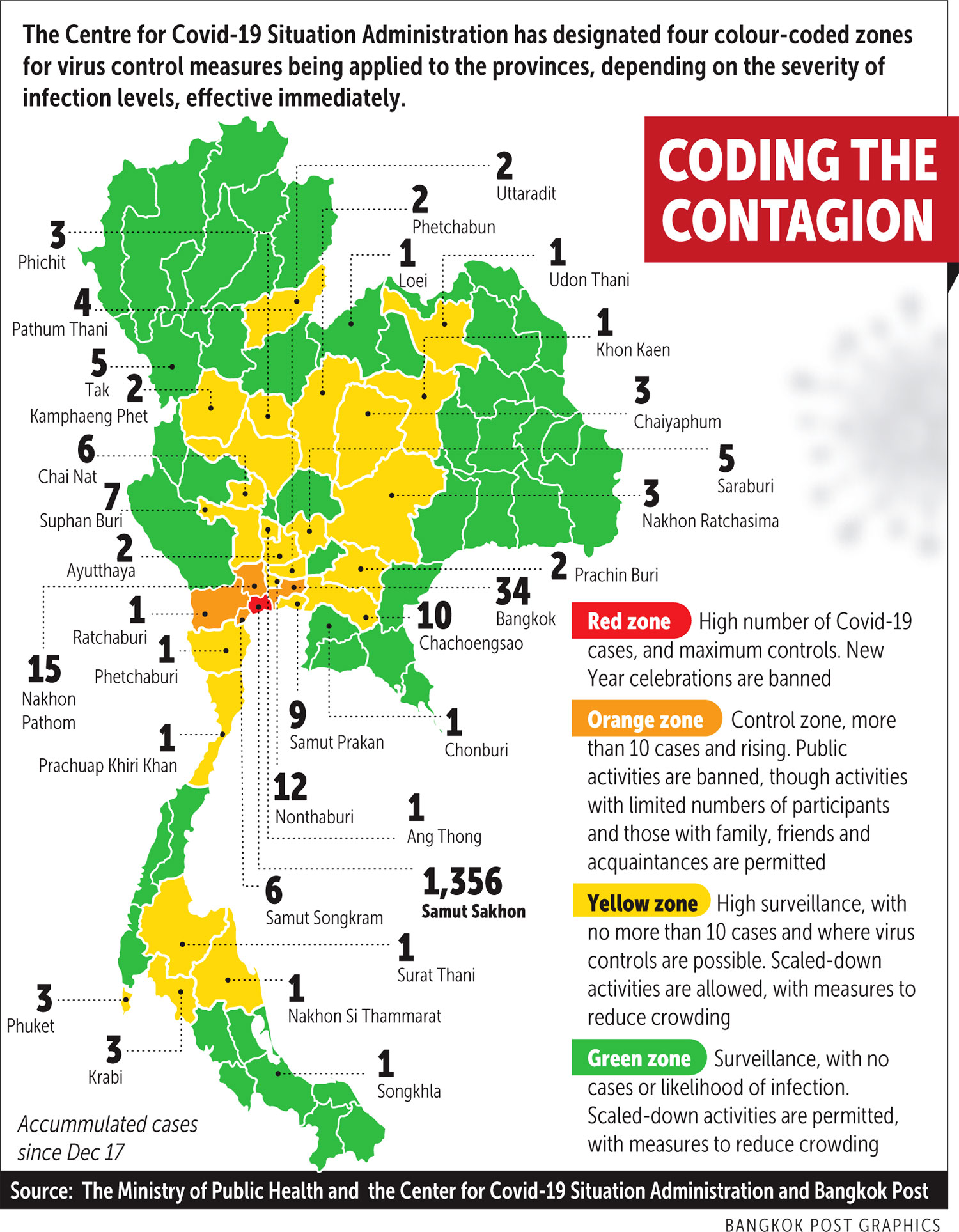 The red zone means maximum control and a considerable number of Covid-19 cases. The only province given this highest at-risk category is Samut Sakhon, the epicentre of the latest outbreak.

In this zone, crowd activities are banned and maximum Covid-19 prevention is imposed at workplaces, factories and workers' dormitories.

At-risk premises must close or limit their operating hours.

Transporting migrant workers out of the province is banned, transporting Thais is restricted in order to limit the impact on businesses and industries. Work from home should be maximised and online education encouraged.

Fishing can continue but fishermen and seafood must be subject to active Covid-19 tests. Affected people are rehabilitated.

Measures in the three other zones are more relaxed. 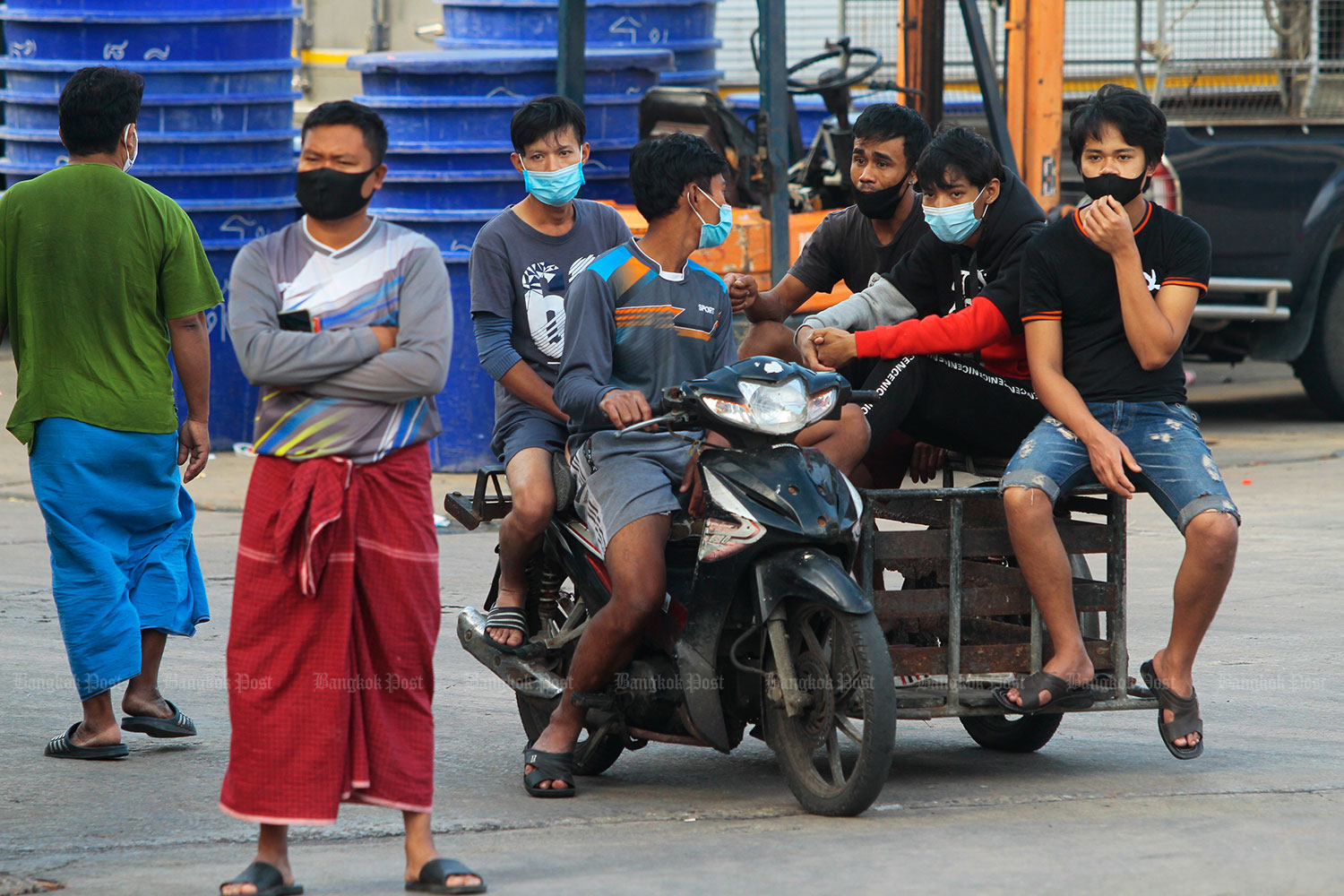 Migrant workers, temporarily off work due to the Covid-19 outbreak, travel through the Central Shrimp Market in Samut Sakhon. (Photo by Arnun Chonmahatrakool) 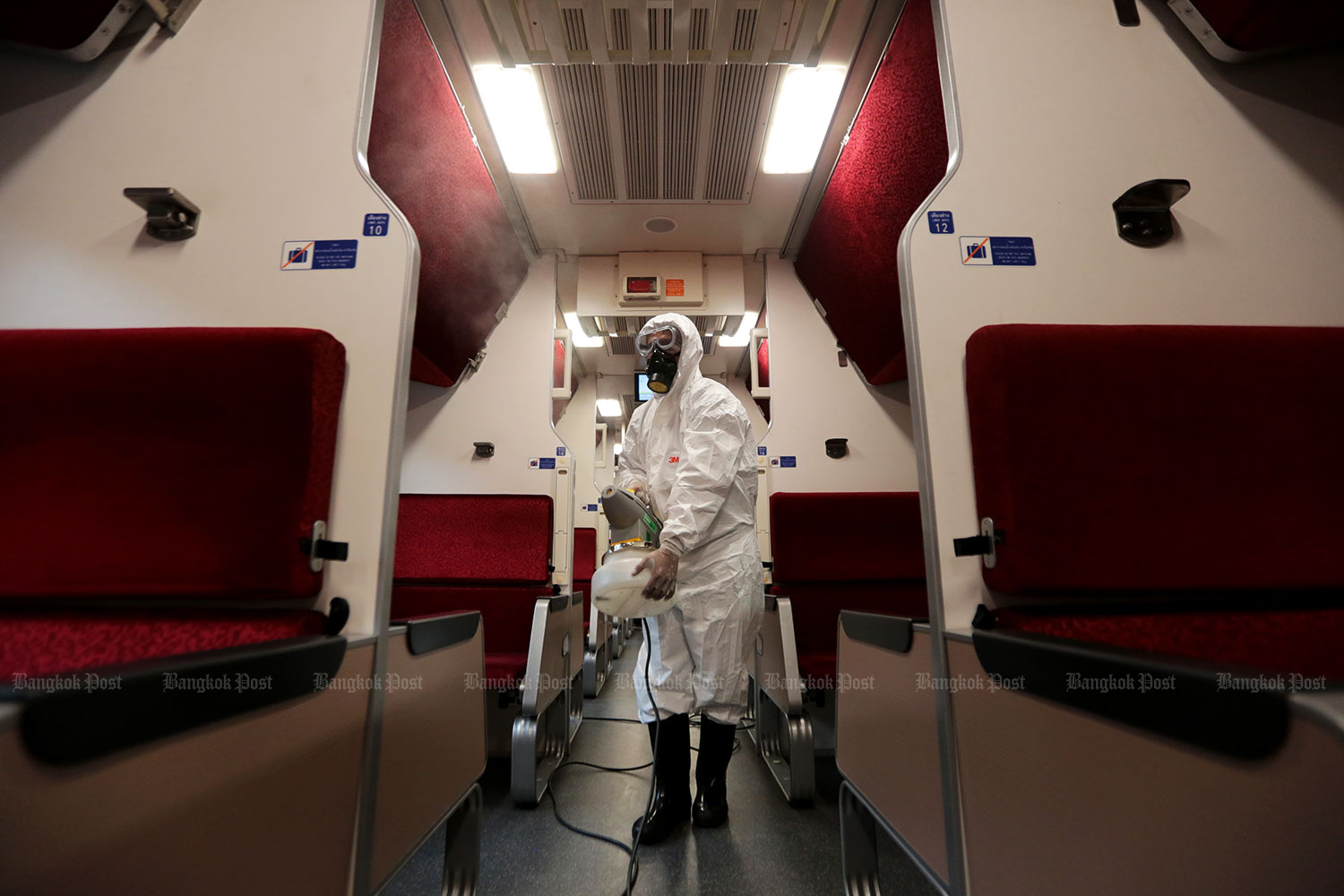 A worker in full protective gear disinfects the interior of an airconditioned compartment of a train bound for Chiang Mai at Hua Lamphong station in Bangkok. (Photo by Chanat Katanyu)

In response to the CCSA order, two major New Year countdown celebrations in the capital have changed their plans. CentralWorld and Iconsiam on Thursday cancelled their countdown concerts. However, operators of the two destinations will still go ahead with their spectacular firework displays, focusing on a live broadcast as a countdown event on Dec 31.

CentralWorld's firework display will continue for at least five minutes under the theme "A Symbol of Hope". 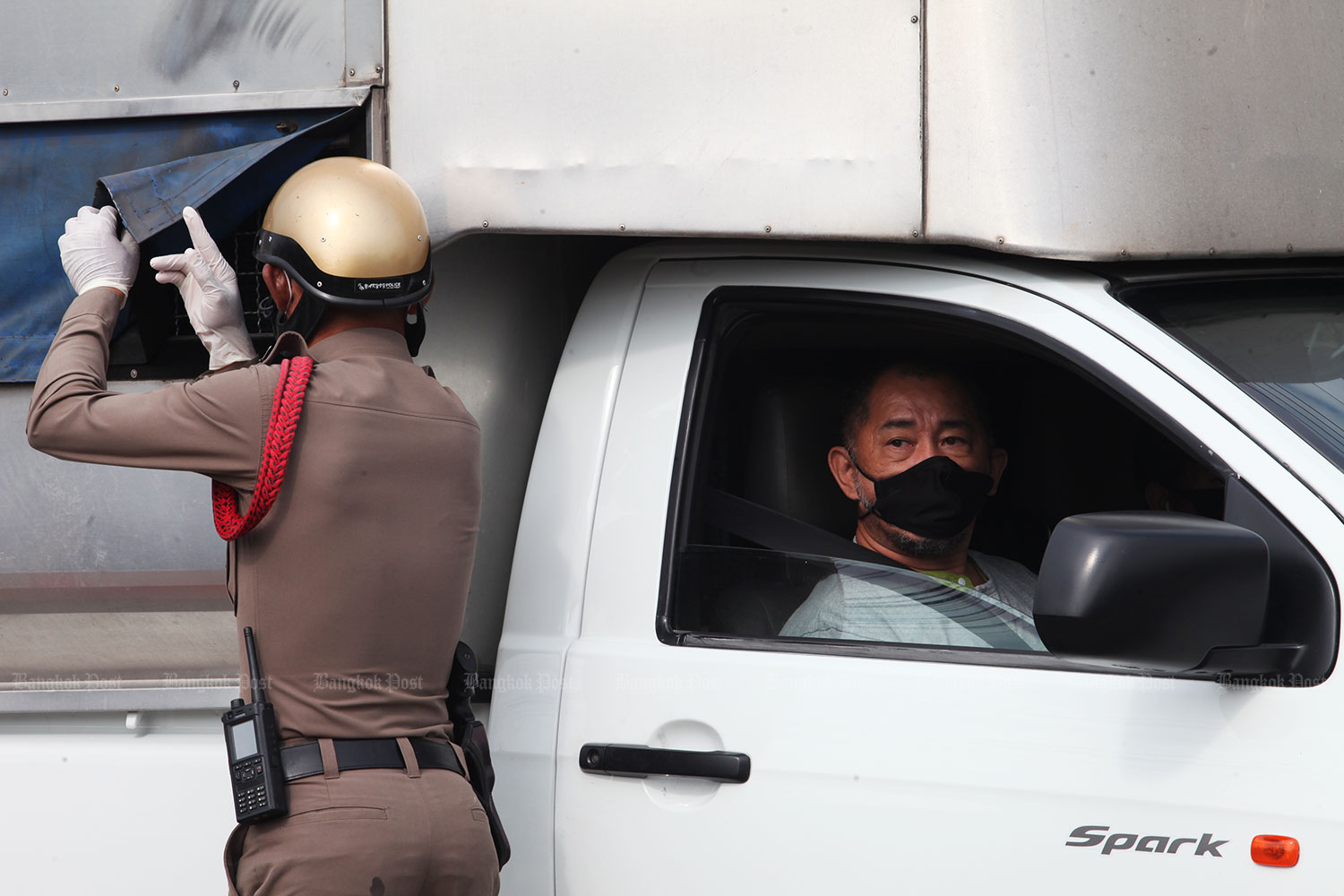 A policeman inspects the back of a delivery vehicle at a roadside checkpoint in Bang Khunthian district of Bangkok. (Photo by Apichart Jinakul) Meanwhile, Iconsiam will broadcast its Amazing Thailand Countdown 2021 - Celebrate The Spirit of Thailand show of 25,000 fireworks along the Chao Phraya River.

Speaking after the CCSA meeting, Prime Minister Prayut Chan-o-cha said the CCSA has designated control zones depending on the severity of the situation so each zone could come up with appropriate measures.

"Many people have been waiting today to see whether I would impose a nationwide lockdown. We have to look at the severity of infection in each area," Gen Prayut said.

In each cluster of provinces, provincial governors, and provincial public health officers will decide which activities will be allowed, the prime minister said.

Gen Prayut said public health experts had confirmed the Covid-19 situation to be under control but cooperation from all sectors was still required. "I don't want you to panic. Medical personnel, nurses and the public health system are enough to handle the situation," he said. 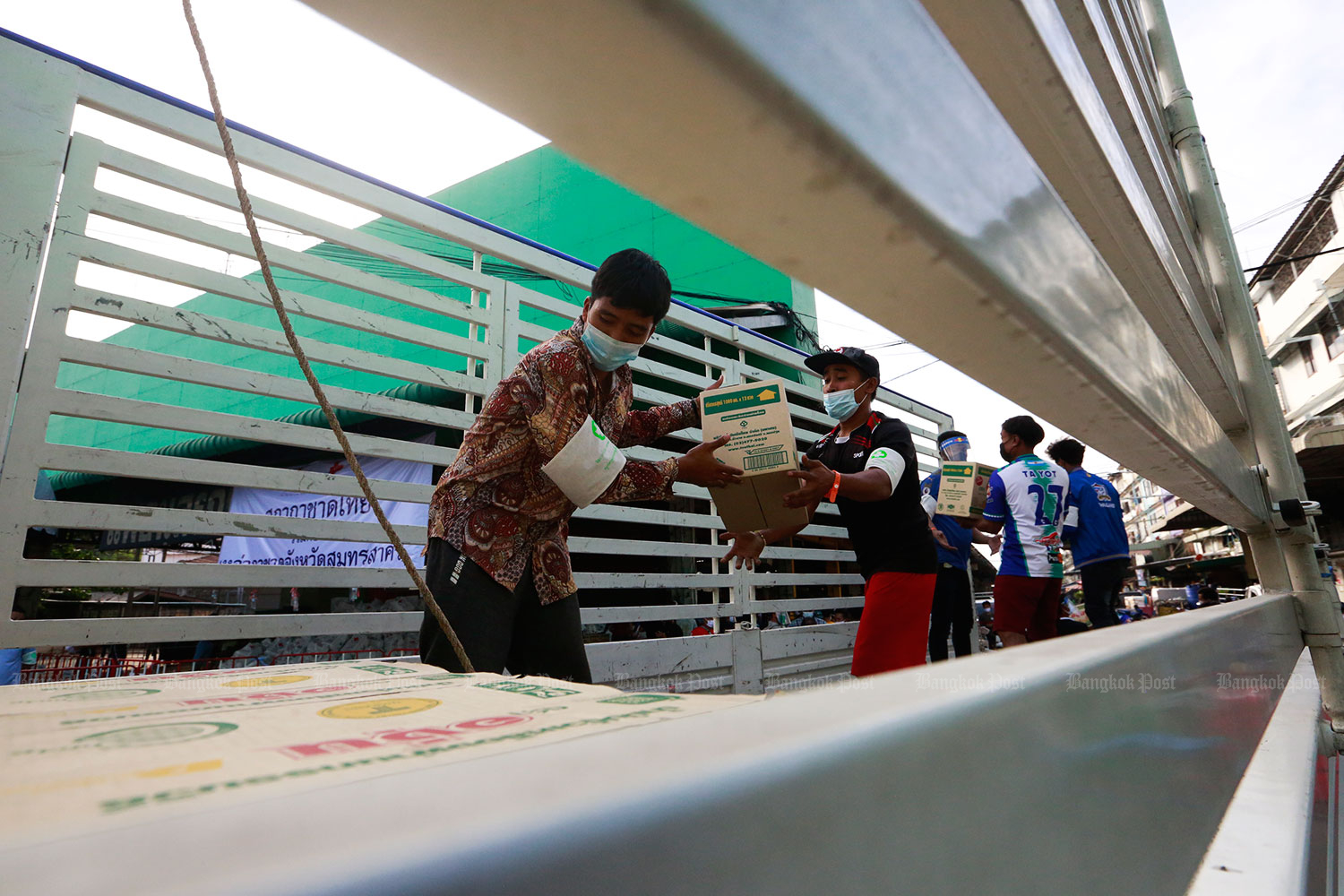